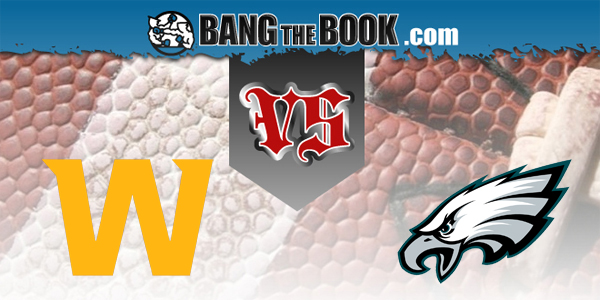 In one of the more unusual NFL seasons to date, we have the situation before us where a team will go to the playoffs with a record below .500. We are not quite sure who that team will be, but the Washington Football Team can simplify matters on Sunday with a victory over the Philadelphia Eagles.

It may not be easy, but then again, nothing has been easy for any of the four teams in the NFC East. the interesting thing is that among the three teams that are still alive, Washington is the one that has the biggest “feel-bad” story as well as the biggest “feel-good” story.

And I guess that makes a lot of sense.

This game against the Eagles is the last of the NFL regular season, and it kicks off at 8:20 p.m. Eastern time at Lincoln Financial Field. For those who are customers of BetOnline, there are going to be a lot of interesting prop bets to take advantage of, so if you’re not on board already, it will be well worth your while to sign up today.

Obviously this Washington team changed its nickname from the Redskins, and Daniel Snyder got a lot of bad publicity. Dwayne Haskins showed a lot of immaturity and probably did not have the confidence of head coach Ron Rivera right from the beginning. He did not succeed, and was cut this past week – apparentl;y with Snyder’s approval.

We’re putting that all in a nutshell, but there is a lot of ground to cover.

The injury situation is very important here, because Washington only turned to Haskins because the alternatives at the QB position were not good. Alex Smith, who has made a miraculous comeback from about 17 operations on his leg, has been sitting out with a calf injury, but the latest word is that he is expected to start.

On the other side, Jalen Hurts will get another start for the Eagles, as speculation builds about what the team will do about Carson Wentz in the offseason. There are a number of important people out for Philadelphia, and that includes running back Miles Sanders and tight end Dallas Goedert. Also out for the Eagles are all pro defensive lineman Fletcher Cox and offensive lineman Jordan Mailata. but Zach Ertz is back in the lineup.

The team will also be losing defensive coordinator Jim Schwartz, who is going to take at least a year off from coaching.

In the Sunday night NFL betting odds posted on this game by the people at BetOnline, Washington is laying points on the road:

Smith is 66% accurate this season with 1420 yards, and he’s been more of a veteran presence and emotional leader than someone who is being counted on to run up numbers. Even so, he has had games of 325 yards against the Giants and 390 yards against the Lions. Other good news for Washington is that Antonio Gibson, who has a turf toe injury, and Terry McLaurin, suffering from a high ankle sprain, are likely to play in this all-n game. If Washington wins, they capture the NFC East. If Philadelphia wins, the winner between the Dallas Cowboys and New York Giants will go to the playoffs.

Gibson, a rookie from Memphis, had 720 yards on the ground this season. McLaurin, who used to catch passes from Haskins at Ohio State, has 1078 receiving yards.

But we do know that when you’re talking about Washington, the strength is defense. They are fourth best in the league overall, third best in passing defense, and have allowed just six yards per attempt, which is very stingy. In the red zone they have prevented touchdowns 47.5% of the time, and only two NFL teams have done better than that. They have also forced opponents into a three-and-out situation 23.5% of the time.

What could be worrisome for the Eagles is that Washington is among the league leaders in sack percentage. And Philadelphia has to start Brett Toth at left tackle, creating a potential mismatch against rookie stud pass-rusher Chase Young. Veteran tackles Lane Johnson and Jason Peters have been out of action for a team that seems to have gotten banged up more than any other in the NFC aside from San Francisco.

Interestingly enough, between these two teams there has been only one scoring output of 30 points or more all season long. That might have us looking “under,” but we also have to give some weight to the idea that Philadelphia is just waiting for this season to end. Smith coming back to action is a great inspiration for us, so we will go all in with the WFT.

Remember that at BetOnline they have a wide selection of prop bets for the Sunday night game. …….. And with Odds Booster, you’ll get “payouts on steroids” on pre-selected parlays….. You can open your account with any payment method imaginable, and that includes cryptocurrencies like Bitcoin!

GET A 100% DEPOSIT MATCH BONUS RIGHT NOW FROM BETONLINE SPORTSBOOK