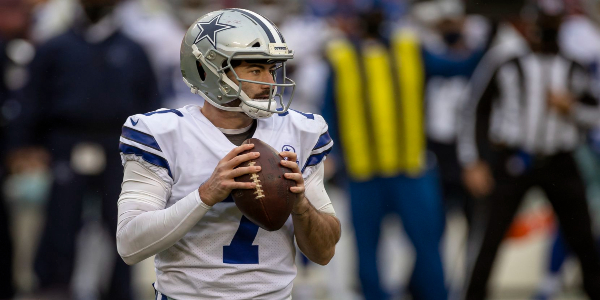 We don’t have to tell you what a strange season it has been for the Dallas Cowboys. And we wish we could say that it is salvageable. But the only thing that could really help them at the moment is that no one seems to want to win the NFC East. But maybe the Philadelphia Eagles are in better shape to do it than anyone else. And they fully intend to cause a lot of problems for the Cowboys as they suit up for Sunday night action at 8:20 PM ET at Lincoln Financial Field in the City of Brotherly Love.

As they always are, BetAnySports find themselves eligible for reduced juice, which offers the chance for better odds, and Sports Betting Prime, which enables real-time wagers after the kickoff.

The Eagles, believe it or not, are tops in the NFC East with a 2-4-1 record. And the Cowboys are a half-game behind them at 2-5. Dallas has yet to cover a game against the pointspread this season.

And the big story surrounding this game is the Cowboys’ quarterback conundrum. Dak Prescott is out for the season, and Andy Dalton suffered a concussion against Washington last week and is in the mandated protocol. Coach Mike McCarthy has not completely ruled him out, but if he can’t go, Ben DiNucci will become the starter.

Ezekiel Elliott hasn’t had a bad history against the Eagles; he’s played six career games against them, and averaged over 100 yards a game. But the bigger problem is with a defensive front that is being steamrolled. Washington torched them for 208 yards on the ground last week; they are giving up 5.2 yards a carry, and they rank dead last in “Stuff Rate,” meaning that opponents are almost always making positive yardage. No team has given up more runs of ten yards or more than the Cowboys have.

In the Sunday Night Football odds that have been posted on this game by the folks at BetAnySports, the Eagles are decisive favorites:

Even as they are getting healthier, there are key elements missing for the Eagles. Dallas Goedert may try to come back, but the tight end is taking it slow after a high ankle sprain and fractured fibula, so it is quite possible that Carson Wentz will go another game without having either of his tight ends (Zach Ertz is already out).

DeSean Jackson has a high ankle sprain. He’ll be out, in addition to Alshon Jeffery. Jalen Reagor may return, but that is not certain. Lane Johnson will be back at right tackle, but he’s not even close to being 100%. And Miles Sanders will once again sit with his knee injury.

Will any of this help the Cowboys be more competitive?

Well, maybe. But the elephant in the room is the quarterback situation. As maligned as he has been in his career, Dalton has 135 career starts to his credit. When you are looking for a “stopgap,” that is probably what you are looking for. What Dallas has now is a rookie signal-caller in DiNucci who has three pass attempts and three sacks, along with journeyman Garrett Gilbert, who had been on the roster of seven different teams and thrown six passes in the NFL. Cooper Rush, who was with the squad last year, was signed to the practice squad for “insurance.”

The number has really skyrocketed on the Eagles, so there’s no value there, particularly since we don’t have a heck of a lot of confidence in their offense, except to keep the ball and kill clock with whatever running back they have. But even with Zach Martin returning, the Dallas defensive line is still a shambles with La’el Collins, Tyron Smith, Jon Looney and backup tackle Brandon Knight on the shelf. This is simply a big task for the young quarterback, and it really wouldn’t surprise us if the Cowboys scored in the single digits again. This points us in the direction of an UNDER.

BetAnySports will make your Sunday Night Football experience more exciting, with reduced juice for better odds and Sports Betting Prime for real-time wagering……… Don’t forget that there are all kinds of options available for deposits. These include debit cards, credit cards, person-to-person transfers and the virtual currency of Bitcoin, which is fast and easy with their automated system, and NEVER incurs a transaction fee!

Free Entry Into the Halloween Blackjack Tournament at BetOnline Sportsbook