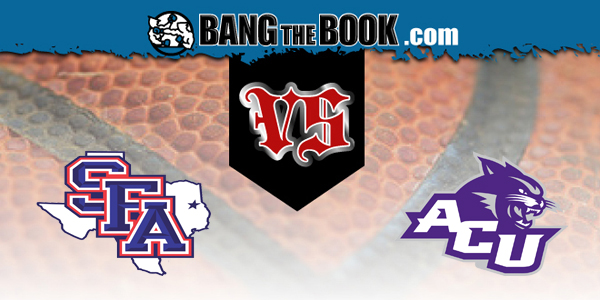 To some folks, the game between the Stephen F Austin Lumberjacks and Abilene Christian Wildcats may not have a lot of meaning, but we can assure you that by the time March Madness rolls around, you will want to know something about either of these squads. That’s because there’s a pretty good chance that one of them will be representing the Southland Conference in the NCAA tournament. And both of them will be in some kind of post-season action at the very least, in one of the other tournaments like the NIT, CBI or CIT.

This one will be contested from the Teague Special Event Center in Abilene, and begins at 8:30 p.m. Eastern time.

And if you are a BetAnySports customer, you can access reduced juice on this game to help you get better odds.

These teams are the two best in the nation at creating turnovers on the part of opponents, as measured by their defensive turnover percentage. So it’s going to be all about Abilene Christian is a little better and taking care of the ball; we have to make note that when stepping up to face Baylor earlier in the season, SFA committed 35 turnovers. Yikes!

It is also worth mentioning that The Lumberjacks traveled to Durham last season and defeated Duke, then the top-ranked team in the nation, at Cameron Indoor Stadium. They had a 28 – 3 record, and would have been a pesky opponent for whoever they faced in the Big Dance, if it had come off.

Abilene Christian is VERY real when it comes to playing defense; they took Texas Tech to the limit earlier this season, holding the Red Raiders to 28% shooting in a 51 – 44 defeat.

The Wildcats are one of the best in the nation at defending three-pointers, allowing just 29.4% from downtown. But what’s interesting about this matchup is that SFA really doesn’t care about long-range shooting all that much. In fact less than 18% of their total point production comes from beyond the three-point Aarc.

What the ‘Jacks are looking for are shots close to the basket. That is evidenced by their 61% accuracy rate from two- point range, which is fourth best in the country. And they don’t have many of their shots blocked either. One huge objective of theirs is going to the line; the number of free throws they take is almost half that of their field goal attempts, and that’s the top percentage in the country.

In terms of the overall defensive edge, however, we have to give it to Abilene Christian, but it’s not necessarily by much. They have a 7-footer by the name of Kolton Kohl who does cause some kind of impediment, but he’s not necessarily a deft shot-blocker. And you have to remember that Stephen F Austin is the top shooting team in the country, percentage-wise.

Abilene Christian gets tremendous ball movement, and although they do spread out things a little bit, they don’t necessarily have the advantage in terms of their ability to shoot three pointers with an awful lot of accuracy.

And on defense, we should mention an area where ACU could be somewhat compromised in this specific matchup. Not only will Stephen F Austin likely hold the advantage getting second shot opportunities, with the number of athletic people they hit the boards, including 6-7 offensive rebounding demon Gavin Kensmil, the Wildcats also have allowed 28% of their points at the free-throw line. That is the highest percentage in the nation, and it seems to play right into what SFA wants to do. Remember that when a team presses, it will leave itself open at the other end. That puts some added importance on getting the “easy buckets.”

So in a game that we consider to be something of a toss-up, we will look to the Lumberjacks to continue their Southland Conference winning streak, which is now up to 20 games. Grab the points.

BetAnySports is your headquarters for college hoops, with reduced juice for better odds and Sports Betting Prime for exciting real-time action during the game…… Make your deposits with a debit card, credit card, person-to-person transfers or the virtual currency of Bitcoin, which is fast and easy with their automated system, and NEVER incurs a transaction fee!