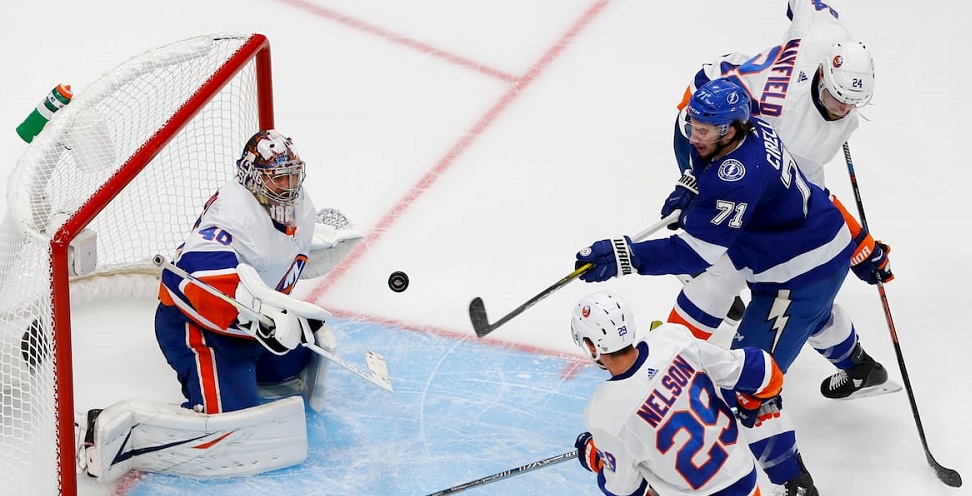 The New York Islanders were flying high in the NHL bubble last year, bringing themselves one step away from an appearance in the Stanley Cup final. But they didn’t have enough to get past the Tampa Bay Lightning, who ultimately won the Cup.

Coach Barry Stotz thinks there’s a big difference between this year and last, in that when the Isles play at home, they’ll extract a lot of energy from a very enthusiastic crowd.

But they won’t have the home ice edge as they begin their semi-final series, which starts on Sunday afternoon at 3 PM ET at the Amalie Arena in Tampa. The Lightning compiled 75 points on the season, while the Islanders had 71.  As the division titles were decided, the NHL seeded the teams for the semis, in a process that was determined by points.

In the series itself, Tampa Bay is listed as the -265 favorite (+225 on the Islanders). As for Game 1, here are the Stanley Cup betting odds as they are posted at BetOnline:

Well, to say the least, the Islanders will have to greatly improve upon last year’s performance, when they were outscored 20-12 as the Bolts took the series 4-2. One of the people most instrumental for Tampa Bay was Nikita Kucherov, who totaled ten points.

He’s going to be a thorn in the side of Trotz once again.

Kucherov, the former MVP, is in the middle of a controversial plot in which the Lightning were able to exploit a loophole in the NHL’s rules. Teams with players who are injured have an opportunity to put those players on a long-term injured reserve list where they would not count against the salary cap. This allows the team to reinforce itself with other players.

And the twist is that those injured players don’t have to stay on the list, or count against the cap, in the playoffs. So Kucherov, who had hip surgery and sat out the entire season, could be re-activated for playoff action. As a result, Tampa Bay is about $9 million above the salary cap. And after the series victory over Carolina, that brought complaints.

Did the Lightning manipulate things to their advantage? Well, the NHL investigated the matter previously and determined that Kucherov’s rehabilitation period was not unnatural.

And anyone who thought he would be rusty was surprised, as he has thus far scored five goals with 13 assists in eleven playoff games.

He is hardly the only thing the Islanders have to worry about. Tampa Bay goalie Andrei Vasilevskiy has been consistently outstanding, leading the league in victories four consecutive seasons. In last year’s series against the Islanders, he posted a .933 save percentage, and so far he’s at .934 for these playoffs. A winner of five of his last six starts, he’s allowed a single goal or less in four of those.

Any way you slice it, this stacks up as a more substantial challenge than the Islanders encountered in the last series against Boston, when they faced a goaltender (Tuukka Rask) who was not at 100% physically.

The Lightning are certainly not invincible; indeed, they were just third in the Central Division, behind Carolina and Florida. But as often happens with teams in the playoffs, they are coming around at the right time, with a hot goalie, lots of depth on offense, and the firepower added with Kucherov.

The Islanders have now reached the semi-finals in consecutive seasons. It’s the first time in 37 years that’s happened. They have done well for themselves with two road wins in each of their two series thus far. But there was a “Jekyll-Hyde” quality to them overall, as they’ve been outscored and outshot as the visitor.

So their trip to the Stanley Cup finals may have to wait a little longer. We’ll take Tampa Bay in Game 1, but we’ll put more emphasis on the UNDER.

At BetOnline they’ve got all kinds of betting possibilities for you when it comes to the Stanley Cup playoffs…… Props are available in profusion for every game, along with the “Live Betting” option. And you can get in on the action pretty easily by using your major credit card or Bitcoin!