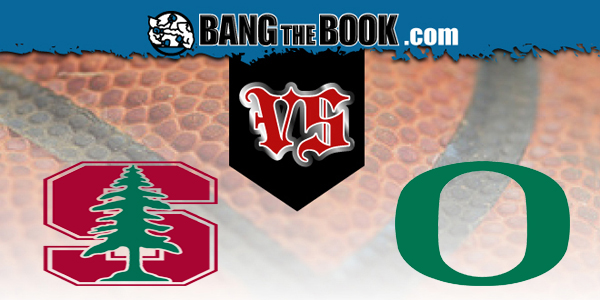 An enormous college basketball card is on tap for Saturday January 2. A lot of teams are getting back at it after the holiday break and tons of important conference games will take place on a great sports day that includes four more bowl games.

It is hard to narrow down just one game to examine, but with the start time on this article, we’ll have to pick something late. How about we head to Eugene, where the Oregon Ducks host the Stanford Cardinal. Oregon is favored by five points with a total of 141 at BetOnline Sportsbook.

This late-night tip will be on ESPNU, so you’ll be able to watch this one with a couple cold brews as you put together the remaining bets on your NFL Week 17 card.

We’ll handicap both sides and find a play for this #Pac12AfterDark matchup.

Most of the market sits 5.5 on this game and it may very well be there at BOL by the time you get to reading this. The Cardinal haven’t played since December 21, which could have something to do with the line move on the Oregon side of things. Stanford is 1-0 in conference play thus far with a three-point win over Arizona in a game that finished 78-75 despite only being played to 69 possessions.

Stanford has been a feast-or-famine defense on the young season. In wins over Alabama, NC A&T, and Bakersfield, Stanford has held the opposition to .775, .628, and .705 points per possession, respectively. They’ve also allowed 1.111, 1.015, and 1.084 PPP in three of their games, but happened to win two of them. The worst defensive performance of the season came against Indiana back on December 2.

The other loss came to North Carolina in what is tied for Stanford’s second-worst offensive performance of the season. In a lot of ways, we could say that the margin for error for Stanford is very small. They’re a decent offensive team, but a strong defensive team. If the defense falters, the onus falls on the offense and that isn’t the place that this team wants to be.

Timing has been everything for Stanford. In their three worst games from a turnover percentage standpoint, they still won. They’ve also lost two of their better games in terms of taking care of the basketball. It’s just really challenging to know what to expect on a day-to-day basis.

Opponents are only shooting 42.3% on two-point shots against the Cardinal, which is pretty reliable over a seven-game sample size, but even that seems ripe for a little bit of regression.

Evaluating the body of work for the Ducks is a bit of a challenge. After allowing 1.169 points per possession to Missouri in the opener, every other opponent has been held below 1 PPP. There also haven’t been many good offensive teams in that mix. Seton Hall was the closest with .999, but the Pirates needed to go 14-of-24 from 3 for that to happen.

San Francisco is a quality offensive team, but the Dons were 8-of-35 from deep against the Ducks and that left them with a season-low 64 points. Oregon really hasn’t been tested much lately. In fact, if we go by Bart Torvik’s current T-Rank ratings, Stanford will go down as the best team that Oregon has faced this season.

Many would say Mizzou and they’d likely be right, but the Ducks have been able to pad their numbers against some lesser competition recently. That’s not to say that this is a fraudulent team by any means. It’s simply to say that maybe they aren’t a top-15 offense in adjusted efficiency. They certainly could be, and they were actually a top-five team last season, but the Ducks haven’t faced many stiff tests.

What we do know is that Dana Altman’s team projects to be very strong on the glass and solid on the defensive end. To this point, the Ducks are playing a lot faster than last season. They were in the bottom 50 in tempo last year and all eight of their games have been played to at least 70 possessions this season.

Given how they’ve dominated from a points per possession standpoint, each additional possession creates an advantage and the ability to get some margin. The Ducks have done that well for the most part this season.

By the looks of things, points could be at a premium here. Oregon has not shot the ball well from distance and Stanford has held opponents to a 42.3% mark on two-pointers. On the other hand, Stanford hasn’t seen many teams as efficient offensively as Oregon.

There are two other unfortunate matchup disadvantages for Stanford here. Oregon forces more turnovers and takes better care of the basketball. With their efficiency metrics to this point, an Oregon team with additional chances will be problematic for Stanford. The Ducks aren’t a great free throw team at 69.3% and that could come into play with this game in the fouling range. It could also drive up the total of an otherwise lower-scoring expectation.