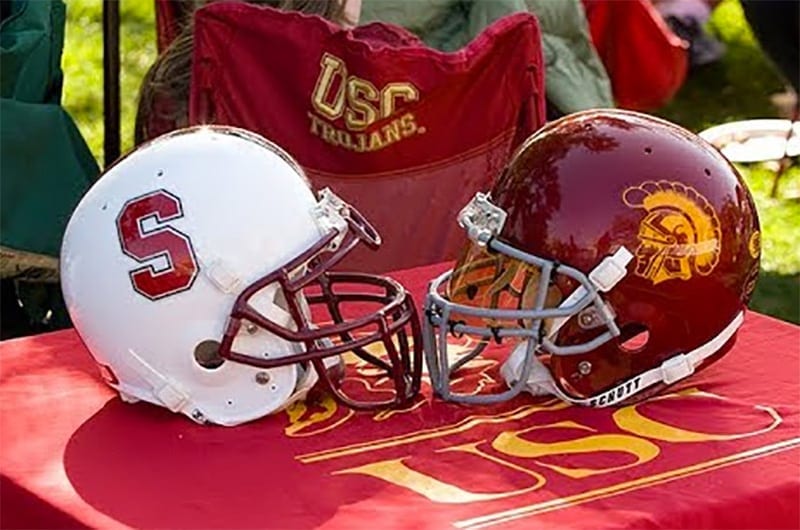 Week 2 of the 2021 college football season brings the Pac-12 showdown from Los Angeles Memorial Coliseum, so here’s the best Stanford Cardinal vs. USC Trojans betting pick for Saturday, September 11, with the kick-off at 10:30 PM ET.

The No. 14 USC Trojans are firm 17-point home favorites on Bookmaker Sportsbook. Stanford is a +640 moneyline underdog, while the totals are listed at 53.5 points. These two schools meet for the first time since 2019, and USC has won three of its previous four encounters with Stanford.

The Cardinal didn’t stand a chance in Week 1

The Stanford Cardinal opened the 2021 CFB season with a 24-7 defeat at Kansas State, failing to cover a 3-point spread. They also put an end to their four-game winning streak, as the Cardinal wrapped up the abbreviated 2020 season in style. Stanford went 4-2 last year, but the Cardinal couldn’t return senior QB Davis Mills, who got picked in the third round of the 2021 NFL Draft.

Senior Jack West started under center last Saturday and got benched for sophomore Tanner McKee after completing one of his three passing attempts. McKee finished with 15-for-18 for 118 yards and a touchdown, so the Cardinal head coach David Show decided to give Tanner a starting call in Week 2.

Stanford racked up 233 total yards against Kansas State. The Cardinal ran for only 39 yards on 22 attempts, so they’ll have to improve a lot on the offensive end. Their defense gave up 200 rushing yards, so the Wildcats didn’t have to rush things through the air.

The Trojans cruised through their opener

The USC Trojans thrashed off the San Jose State Spartans in Week 1 and easily covered a 14-point spread in a 30-7 home victory. They posted 34 rushing attempts for 160 yards, while junior QB Kedon Slovis tossed for 256 yards and a couple of touchdowns.

Junior wideout Drake London had 12 receptions for 137 yards, proving he’ll be a leader of this USC receiving corps. Last year, London recorded 33 catches for 502 yards and three touchdowns, while Slovis completed 67 percent of his passing attempts for 1921 yards, 17 touchdowns, and seven interceptions.

Stanford’s offense seems to be a huge problem in 2021. The Cardinal will struggle to replace Davis Mills, so I’m backing the Trojans to tally another big win and cover a 17-point spread at home. USC’s defense might be an issue, but against this Stanford team, the Trojans should be fine, while their offense will make the difference.

If they improve their ground game, the USC Trojans will have a successful campaign. Kedon Slovis looks good under center, but the Trojans have to demand more from their offensive line and run more efficiently.

If the Cardinal replicate their offensive performance from Week 1, we’ll see a low-scoring affair. They should have enough firepower to slow down the Trojans’ passing offense, and Stanford’s secondary ranked 44th in the nation in passing yards allowed last term (216.7).

However, that Week 1 display was really poor, and it seems like the Cardinal will struggle once more in this tough matchup with the No. 14 USC. The under is 6-1 in the Trojans’ last seven games overall, and it is 7-3 in the Cardinal’s previous ten outings in Week 2.