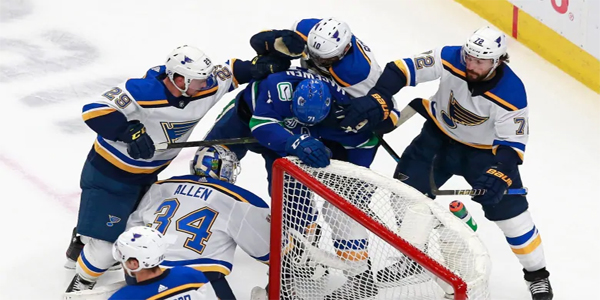 The 2022 Stanley Cup betting action continues Tuesday, May 10, with Game 5 of the Western Conference First Round series between St. Louis and Minnesota, so we have prepared the best Blues vs. Wild betting pick and odds.

The series is tied at 2-2, and the Wild open as -140 home favorites for Tuesday’s clash. The Blues are listed as +120 moneyline underdogs, while the totals sit at 6.5 goals on Bookmaker Sportsbook.

The St. Louis Blues outplayed the Wild in Game 4 this past Sunday and earned an important 5-2 victory as slight -105 home underdogs. They outshot Minnesota 34-30 and won nine faceoffs more than their rivals (35-26), while David Perron and Jordan Kyrou led the way with a couple of goals each.

Ville Husso has guarded the cage in the first three games of the series. After posting a shutout in the opener, the 27-year-old netminder has surrendered nine goals on 59 shots through Games 2 and 3. Jordan Binnington got the nod in Game 4 and yielded a pair of goals on 30 shots (.933 SV%).

Binnington went 18-14-4 this past regular season, posting an underwhelming 3.13 GAA and .901 save percentage. He was a key member of the 2019 Blues team which won the Stanley Cup, so St. Louis hopes Jordan will make the difference once more.

The Minnesota Wild failed to score in Game 1, but they’ve netted 11 goals over the next two games, outlasting the Blues 6-2 and 5-1 in the process. Marc-Andre Fleury has recorded 61 saves over those two victories, but the three-time Stanley Cup champion with the Pittsburgh Penguins yielded four goals on 33 shots in Game 4 (.879 SV%).

Winger Kirill Kaprizov scored a hat trick in Game 2. He’s also found the back of the net in the previous two contests. Kaprizov was a key player for the Wild in 2021-22, finishing with 47 goals and 61 assists.

Minnesota got swept in a four-game regular-season series against St. Louis, but the Wild showed in the postseason they have enough firepower to compete with the Blues. The Wild are arguably one of the best offensive teams in the NHL, and I’m expecting them to prove it in Game 5 of this first-round set.

The Blues are a top-notch offensive team as well. On paper, Marc-Andre Fleury should be a difference-maker, but I would be surprised if we see a low-scoring affair. This game could easily go either way, as both teams have a lot on the table with their series tied at 2-2.

Both St. Louis and Minnesota relied heavily on their offense in the regular season. The Blues were tallying 3.77 goals per game (3rd in the NHL), while the Wild were scoring 3.72 (5th). Their four regular-season encounters have gone over the total, and the over is 10-4 in the previous 14 meetings between St. Louis and Minnesota.

Six of the Blues’ last eight games overall and 12 of their previous 15 showings on the road have gone over the total. On the other side, the over is 7-4 in Minnesota’s last 11 outings on the home ice.