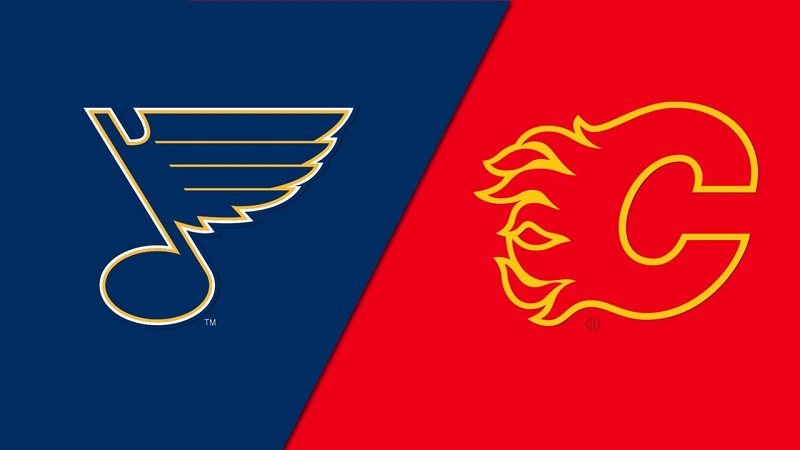 St. Louis and Calgary open their three-game regular-season series Monday, January 24, 2022, at Scotiabank Saddledome in Calgary, Alberta, so we’re taking a closer look at this Western Conference battle to get you the best Blues vs. Flames betting pick and odds.

The Blues play on the second day of a back-to-back set in Canada (their Sunday night’s clash against Vancouver has been excluded from the analysis), while the Flames are coming off a tough 5-3 defeat at the Edmonton Oilers. St. Louis opened as a small road dog on BetOnline Sportsbook for this one, searching for its fifth straight victory over Calgary.

The Blues have been terrific lately

The St. Louis Blues have won seven of their last games before visiting the Vancouver Canucks on Sunday. Five of those seven wins have come on the home ice, as the Blues continue to chase the top spot in the Central Division.

St. Louis boasts the fifth-highest scoring offense in the NHL, tallying 3.53 goals per game. The Blues own the second-best power-play percentage (29.3%) and the fourth-best shooting percentage in the league (11.1%).

The Flames lost five of their last six games

The Calgary Flames (18-12-6) have struggled mightily over the last few weeks. They’ve won only one of their previous six contests at any location, scoring 15 goals in the process and yielding 26 in a return. Last Saturday, Calgary lost the Battle of Alberta, allowing the Edmonton Oilers to snap their seven-game skid.

The Flames are fifth in the Pacific Division, trailing the top-seeded Vegas by eight points. Calgary scores 3.08 goals per game (tied-14th in the NHL) on a poor 8.8 shooting percentage (23rd). The Flames’ power-play percentage of 23.1 ranks 11th, but they had the third-fewest opportunities (104).

Jakov Markstrom is expected to guard the cage Monday against the Blues. He’s 13-9-5 with a 2.25 GAA and a .924 save percentage on the season, posting five shutouts in the process. The Flames surrender only 2.58 goals per game (4th).

The Flames desperately need to break out of their slump as soon as possible. Beating the in-form Blues will be a tall task, but St. Louis will have to deal with fatigue on the second night of a back-to-back set, so Calgary certainly stands a chance.

Excluding their Sunday’s game in Vancouver, the Blues have won only three of their last 11 games on the road. The Flames are coming in full strength, so I’m expecting them to step up and get back on the winning track. Calgary possesses enough defensive weapons to deal with the Blues.

The Flames have to improve on the defensive end. Their defense has been excellent for most of the season, but over the last few weeks, Calgary’s blue line has been awful. Jakob Markstrom is having a nice season, but he needs more help from his teammates.

On the other side, the Blues’ defense has had some ups and downs. I’ve mentioned their top-notch penalty killing, while the Flames have allowed only 18 goals on 107 power-play opportunities (7th in the NHL).