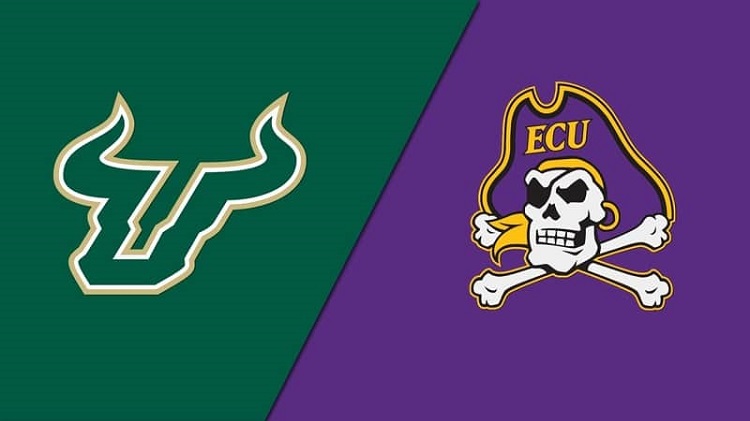 Week 9 of the 2021 college football season kicks off Thursday, October 28, with a couple of games around the country, so we have prepared the best South Florida vs. East Carolina betting picks and odds.

Last year, the Pirates put an end to their five-game losing streak to South Florida, grabbing a 44-24 victory as 5.5-point road underdogs. This time around, they are firm 9.5-point home favorites at Dowdy-Ficklen Stadium, while the Bulls are +310 moneyline underdogs with a total of 56.5 points on MyBookie Sportsbook.

The USF Bulls (2-5; 4-3 ATS) are coming off a convincing 34-14 home victory over the Temple Owls this past Saturday. They easily covered a 1.5-point spread and put an end to their three-game losing streak.

The Bulls racked up a whopping 421 rushing yards against the Owls (5.8 per carry). Junior RB Jaren Mangham led the way with 26 totes for 152 yards and a couple of touchdowns, while freshman QB Timmy McClain tossed for 71 yards and an interception.

After a narrow 20-16 loss at UCF in Week 6, the East Carolina Pirates (3-4; 4-3 ATS) suffered another tough defeat last Saturday. They were listed as 13.5-point road underdogs at Houston, and the Pirates battled bravely to force overtime but eventually came short, 31-24.

East Carolina held the Cougars scoreless in the second half. The Pirates surrendered only 256 total yards while racking up 360 in a return, while junior signal-caller Holton Ahlers tossed for 278 yards and a couple of touchdowns.

The Bulls are coming off a nice victory over Temple, but they’ll have a much taller order in this matchup with the Pirates, who are a much better offensive team than the Owls. USF certainly stands a chance of keeping it close, as East Carolina is not an elite defensive team by any stretch of the imagination, but the Bulls have been awful defensively so far this season.

South Florida is winless in nine straight outings on the road. In each of their last six road contests, the Bulls have allowed at least 34 points to their opponents.

This is the clash of the two bad defensive teams. They shouldn’t have too many problems moving the ball against each other, especially if they both continue to run the ball as much as they can.

Over their last outings at home, the Pirates defeated Charleston Southern 31-28 and Tulane 52-29. On the other side, the Bulls have allowed 121 points in total in their three road contests so far this term. The over has hit in nine of the Bulls’ last 13 games at any location.