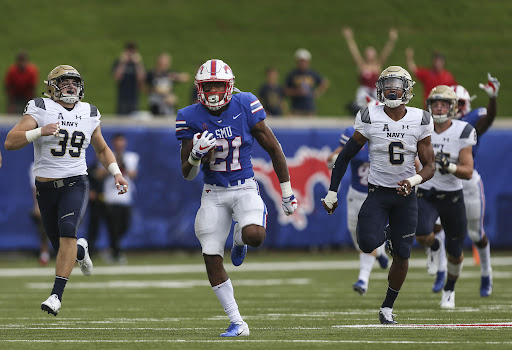 Week 6 of the 2021 CFB season brings plenty of interesting matchups on Saturday, October 9, including the American Athletic Conference showdown from Navy-Marine Corps Memorial Stadium in Annapolis, so we’ve prepared the best SMU vs. Navy betting pick and odds.

According to Bovada Sportsbook, the Mustangs are firm 13.5-point road favorites with a total of 55.5 points. They are only 2-9 straight up and 3-8 ATS in the previous 11 meetings with Navy, but the Mustangs outlasted the Midshipmen 51-37 as 13-point home favorites in 2020.

The SMU Mustangs continue to dominate their rivals in 2021. They improved to 5-0 straight up and 4-1 ATS on the season following a 41-17 thrashing of the South Florida Bulls in Week 5. The Mustangs covered a 21-point spread at home and kept their opponents below a 30-point mark for the first time since Week 2.

SMU held the Bulls to 336 total yards while racking up 463 in a return. The Mustangs ran 40 times for 162 yards, and senior RB Tre Siggers led the way with 20 carries for 86 yards and a TD. Junior QB Tanner Mordecai tossed for 301 yards, four touchdowns, and an interception, while senior WR Danny Gray had seven receptions for 74 yards and two touchdowns.

Navy finally got one in the win column

The Navy Midshipmen (1-3; 2-2 ATS) are back on the right track, grabbing a 34-30 home victory over the UCF Knights in Week 5 to put an end to their eight-game losing streak dating back to the 2020 season. Navy overcame a 13-point deficit in the fourth quarter, scoring 17 unanswered points, including Tai Lavatai’s one-yard TD run.

Lavatai missed the previous two contests due to a lower-body injury. He’s started under center last Saturday and went 2-of-4 for 58 yards while carrying the pigskin 21 times for 57 yards and a couple of touchdowns.

The Mustangs have been unstoppable on the offensive end so far this season, and I don’t see the Midshipmen slowing them down, so give me the visitors to cover. It’s not going to be an easy task, especially if the hosts find a way to run efficiently, but the Mustangs are allowing 131.2 rushing yards per game (57th in the nation) and will be ready for the challenge.

On the other side, the Midshipmen will struggle mightily to cope with SMU’s passing game which is the main reason why I think the Mustangs will manage to cover. SMU is 0-5 ATS in its last five road tilts against Navy, and these Mustangs should be able to snap that skid.

The over is 3-1 in Navy’s four showings this season, and it is 5-1 in the previous six encounters between the Midshipmen and Mustangs. I would ride these betting trends, hoping to see another strong performance by SMU’s offense.

The Mustangs have scored 35 or more points in each of their five outings in 2021. They are not an elite defensive team, so the hosts should be able to contribute and help this game fly over the totals.