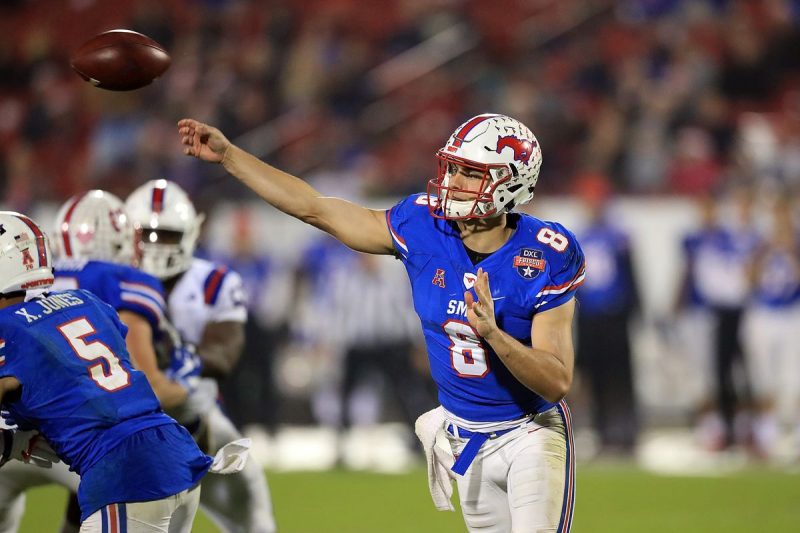 Another thrilling college football Saturday is upon us, so we bring you the best SMU vs. Louisiana Tech betting pick and odds, as the Mustangs face off against the Bulldogs at Joe Aillet Stadium in Ruston, Louisiana.

According to BetDSI Sportsbook, SMU is a 13-point road fave, while the totals sit at 66.0 points. The Mustangs meet the Bulldogs for the first time since 2017 when LA Tech dismantled SMU as a 51-10 as a 4-point road underdog.

The SMU Mustangs (2-0; 2-0 ATS) cruised through the first two weeks of the 2021 college football season. After a 56-9 thrashing of the Abilene Christian Wildcats in Week 1, the Mustangs outlasted the North Texas Mean Green 35-12 as 22.5-point home favorites in Week 2.

Junior QB Tanner Mordecai leads the way for SMU this term after transferring from Oklahoma. Last year, he played four games for the Sooners, but the starting job for the Mustangs was a perfect chance for Mordecai.

Tanner had a field day against North Texas, tossing for 312 yards and four touchdowns. Rashee Rice recorded four catches for 99 yards and a TD, while Ulysses Bentley IV had ten carries for 141 yards and a TD. Bentley led the Mustangs’ backfield in 2020 with 913 rushing yards and 11 scores on the ground through ten appearances.

LA Tech hopes to stay on the winning path

The Louisiana Tech Bulldogs are coming off a 45-42 home victory over the SE Louisiana Lions in Week 2. They failed to cover an 11.5-point spread, but the Bulldogs put an end to their three-game losing streak and improved to 1-1 on the season.

Back in Week 1, Louisiana Tech suffered a tough 35-34 defeat at the Mississippi State Bulldogs, blowing a 20-point lead in the fourth quarter. The Bulldogs allowed 370 passing yards and managed to lose the game even though they forced six turnovers and had a couple in a return.

LA Tech bounced back in Week 2 mostly thanks to junior RB Greg Garner, who had 62 yards from scrimmage and three touchdowns. Senior QB Austin Kendall threw for 217 yards, a TD, and an interception, while wideouts Smoke Harris and Tre Harris combined for 117 yards and a TD.

The Mustangs are 0-3 straight up and ATS in their last three encounters with the Bulldogs, but this SMU team has an excellent opportunity to snap the skid. Tanner Mordecai will have another chance to showcase his talents against the Bulldogs’ secondary, while the Mustangs hope to continue with their solid defensive performance.

Covering a 13-point spread could be a problem, especially on the road. Hereof, I would rather take the totals instead of the side bet, as both teams are capable of putting some serious numbers on the scoreboard.

I’m expecting to see a shootout mostly because of the Bulldogs’ leaky defense. They are surrendering a whopping 432.5 passing yards per game. On the other side, SMU is yielding 298.5 yards through the air per contest, so we should get a proper high-scoring affair.

SMU’s D looked good last weekend, but playing against North Texas at home is not a proper benchmark. Also, that opening clash against Abilene Christian was an easy task, so the Mustangs should have their first proper test against LA Tech.