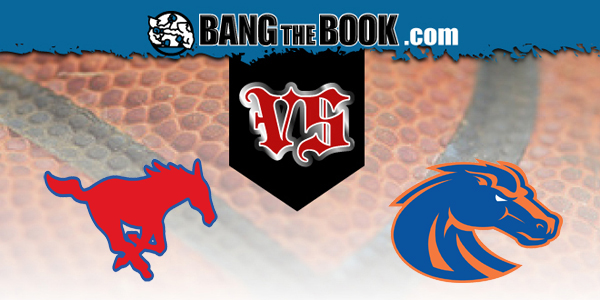 Because the college basketball season was beset with so much difficulty in the way of COVID-related problems, some teams have played a lot fewer games than others.

Such is the case in Thursday night’s NIT action between the SMU Mustangs and the Boise State Broncos. All these games are being played in the Dallas-Fort Worth area, and this one will take place at the Comerica Center in Frisco, TX.

BetAnySports has reduced juice for all of you on this game, and when you take advantage of Sports Betting Prime, you can place real-time wagers while the contest is in progress.

SMU did not compete against a big-time non-conference slate this season. The Mustangs beat Dayton and Temple, as well as Memphis, but they were beaten quite convincingly by top ten-ranked Houston (74-60 and 70-48) and then lost 74-71 to a relatively ordinary Cincinnati team in the American Athletic Conference tournament.

SMU (11-5) experienced several delays on the season, and it was particularly daunting that they did not play between February 8 and March 12. Given that set of parameters, maybe it was a pretty good showing in the conference tourney.

Boise State comes into this tournament with an 18-8 record. They also played Houston, losing 68-58 in the season opener. Then they went on a tear, winning 13 straight games.

There is no doubt that BSU has demonstrated some ability to compete with higher-level teams. They swept two games against Utah State, which is in the Big Dance. And they also, on January 29, scored an 85-77 victory on the road against Colorado State, which has essentially been certified as one of the last four teams left out of the NCAA field.

They also took a rock-solid San Diego State team into overtime before losing. Unfortunately for them, they got tripped up in the Mountain West tournament, losing to Nevada.

The big blow to the Broncos is that they will be without senior forward Abu Kigab, who dislocated a shoulder and had surgery. Kigab made second-team All-MWC, averaging 11.4 points and 5.7 rebounds in conference games.

It must be said, however, that Kigab had made just three of his previous 19 shots from the field. And the Broncos still have some elements that make them formidable. Derrick Alston, a 6-9 senior forward, scored 20 or more points on 13 different occasions, and tallied 49 points in those two victories over Utah State. And Mladen Armus has had four or more offensive rebounds in a game 13 times.

Have we seen the best SMU has to offer? Probably not. But you know, this is a team that has played just once in the last five weeks. With point guard Kendric Davis, they have an ace in the hole. Davis had an outstanding ratio of 2.9 assists for every turnover. And he had 35 points against Cincinnati in that AAC tournament game.

Feron Hunt was a third-team All-AAC pick, and there is more size behind him on the bench. SMU has been very difficult to score against, allowing just 43.4% from two-point range. That’s eighth best in the nation.

Kigab’s absence hurts Boise, as does that of injured 6-5 reserve guard Max Rice, son of Broncos coach Leon Rice, who was actually coached by John Stockton as a youth and has provided a lot of instant offense off the bench.

Yet Boise State is still favored. After a long layoff, SMU scored just 23 points in the first half against Cincinnati, but when they got their legs under them, they erupted for 48 points in the second half.

The Mustangs loom as a decent underdog play here.

During the NIT, you’re going to be right on top of the action with BetAnySports, where you have reduced juice for better odds, in addition to Sports Betting Prime for real-time wagers………. Open an account very easily, with debit cards, credit cards, person-to-person transfers or the virtual currency of Bitcoin, where there is no transaction fee!