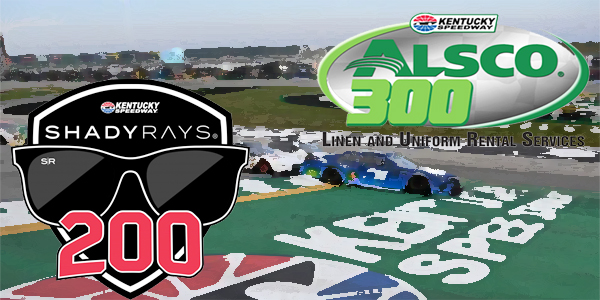 The Xfinity Series has another doubleheader on the horizon. After doing one June 13-14 in Homestead, Florida, the drivers will run the Shady Rays 200 on Thursday July 9 and then the Alsco 300 on Friday July 10. That will be the second of three Alsco 300s on the schedule, not to be confused with the one at Charlotte back on May 25 or the one scheduled for Las Vegas on September 26.

We only have odds out for the Shady Rays 200, but you’ll be able to apply all of this information to Friday’s longer race as well. This race replaces the race at New Hampshire Motor Speedway, but won’t quite get the Xfinity Series on the same schedule as the Cup Series. The Cup Series will run its 17th race on Sunday with the Quaker State 400. These are the 14th and 15th races for the Xfinity Series.

Nevertheless, the Xfinity Series is usually short a few dates anyway, but these doubleheaders are so intriguing. Drivers that wreck the primary car or have a mechanical issue may have to turn to the backup car, so we could see a very different outcome on Saturday. On the other hand, running the same car back can be very beneficial as well.

Those odds come from 5Dimes Sportsbook and the way things are looking, we aren’t that far away from Chase Briscoe being priced the way Kyle Busch’s numbers used to look for Xfinity Series races. Briscoe is the +225 favorite coming off of last week’s win in the Pennzoil 150, which we did call in the preview.

Briscoe now has five wins in 13 races and he will be in the Cup Series next year without a doubt. Noah Gragson, who sits second in points and tied for second in wins with two, is a co-second favorite with Austin Cindric and Ross Chastain.

Chase Briscoe has won three of the last four races. He won Stage 2 at Talladega, but ultimately finished 18th. He’s won five times this season, including 1.5-mile wins at Las Vegas and Homestead. He was 20th at Charlotte, ninth at Atlanta, and seventh at Homestead in the first race. His last two wins have been on the 2.5-mile track at Pocono and the road course at Indianapolis.

It makes sense that Gragson is one of the second favorites at +550. He actually led the most laps in both Homestead races and won Stage 2 in both of them. He was fourth at Las Vegas and second at Atlanta. His strong third-place showing last week was very impressive, given that he profiles as a guy that would have most of his success on oval tracks.

Chastain is kind of a hard guy to peg. He’s got four top-five finishes this season, including three in his last four races, with the most laps led at both Talladega and Pocono. At 27, he’s one of the elder statesmen of the Xfinity Series, so much so that he has 171 career races under his belt. He’s also only won twice and only has 31 top-10 finishes. In fact, this is really the first year that he’s had much in the way of sustained Xfinity Series success. Maybe the Kaulig Racing team is the difference for him.

It is just hard to trust him at low prices like this. He did win at Las Vegas back in 2018 and then last year in the second Daytona race, which was his only start for Kaulig Racing. Kaulig, an arm of the Richard Childress Racing team, also has Justin Haley and AJ Allmendinger, who have both been factors at the Xfinity Series level this season.

Austin Cindric has seven top-five finishes and actually leads in stage points this season, but has yet to secure a win. He has run really well on the 1.5-mile tracks with a couple of runner-up finishes. He also led the most laps and won the first two stages at Atlanta before finishing 16th.

Harrison Burton scored one of the two wins at Homestead, but has gone in the wrong direction the last three weeks with finishes of 32nd, 32nd, and 25th. Even at what looks like an attractive +880 price, he is a hard guy to take.

The fact of the matter is that every race is Briscoe’s race to lose at this point. And he’s lost a few, which is the case as a young driver. Gragson is the next best option at +550 given his success on tracks like this so far this season. There doesn’t seem to be a good option for a value pick this week.

We’ll see what happens on Friday leading into Saturday’s race. We won’t have an additional preview with the quick turnaround time, but keep an eye on Friday night’s race and see if you can pick anything up for Saturday.