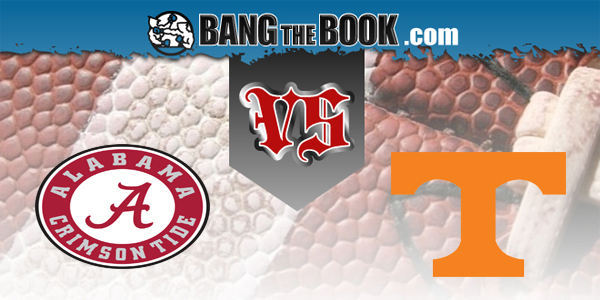 The Alabama Crimson Tide spoke out loud last Saturday, and the message was that they were every bit as good as the Clemson Tigers, who dealt out a 73-7 shellacking to Georgia Tech. One might argue – with a certain degree of success – that Bama’s 41-24 win over the Yellow Jackets’ neighbors to the northeast, the Georgia Bulldogs, was more impressive.

At the moment, Clemson is #1 and Alabama is #2. Is there going to be anything in the way of a “letdown” moment on the part of the Tide? That could be the only concern as they get together with the Tennessee Volunteers. Kickoff is scheduled for 3;30 PM ET, and Nick Saban’s team takes to the road at Neyland Stadium in Knoxville, laying heavy lumber.

Don’t look now, but Mac Jones is putting together a Heisman Trophy case for himself. He had 417 yards and four more touchdown passes against a Georgia defense that was considered by many to be the best in the country.

Jones is completing 78.3% of his passes, and there are only a handful of QB’s who have thrown for more yards. Alabama, known for years for rock-ribbed defense, seems to have discovered that piling on points is the way to go, as they are second in the nation at 48.5 points per game, moving along at 561 yards per contest.

The explosive receivers are present: Jaylen Waddle (557 yards), Devonta Smith (483) and John Metchie III (348). And we have recently talked about Jones’ big play ability, as going into that Georgia game he had completed 72%, with 21 yards an attempt, when throwing the ball more than ten yards past the line of scrimmage. To give you some perspective, there is no one in the NFL who is close to that.

Tennessee was heralded as a team that could take a leap, but we’re still waiting for that to happen. Sure, the wins over South Carolina and Missouri to start the campaign weren’t bad, but there was very little encouragement to be found in decisive losses to Georgia and Kentucky.

QB Jarrett Guarantano has never really been the answer; he threw two pick-sixes last week in the Kentucky game. This is not one of Alabama’s best defenses, but they picked off Stetson Bennett three times, and may be plenty good enough to compete with Tennessee’s low-octane attack (65th in total offense).

Saban may claim to be strong as an ox like Donald Trump after getting over the coronavirus (if he ever indeed had it) and that certainly can’t be good news for anybody on the other sideline. Much has been made of Saban’s ongoing series against his former assistants, Last week he vanquished Kirby Smart to bring the overall record to 22-0.

And now his former defensive coordinator, Jeremy Pruitt, gives it another try. For what it’s worth, in Pruitt’s first two seasons, the Tide’s winning margins have been 37 and 22 points. This seems to be a point of pride for Saban, and there are possible “style points” in this pursuit of the #1 spot, so it’s unlikely he’ll take the foot off the gas pedal.