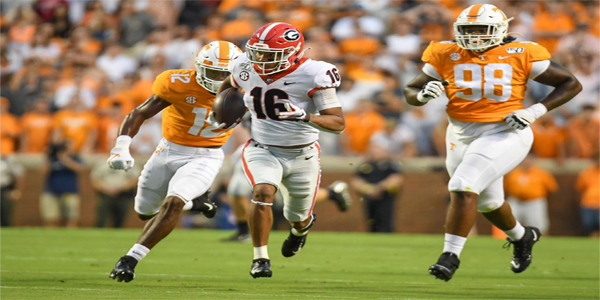 Let’s take a look at some of the games that are happening in the Southeastern Conference this week, including #2 Alabama and #3 Georgia in action:

So which Mississippi State team were we looking at? The one that flew all over the layout against LSU, with KJ Costello throwing for 623 yards, or the Bulldog squad that sputtered against Arkansas, low-lighted by Costello’s three interceptions? This week, we’d tend to side with the former. Kentucky was riddled some by the Ole Miss offense that was newly-designed by Lane Kiffin. And they are not nearly as dynamic without the presence of Lynn Bowden (now with the Miami Dolphins) doing his Kordell Stewart imitation last year.

The “Air Raid” is something not often seen in SEC circles, and that was no mirage against the defending national champions, and Mike Leach has a pretty good recent history as a dog (covered 15 of last 23). We would take the points with MISSISSIPPI STATE

Jeremy Pruitt is trying to blaze the same trail as Kirby Smart – as a former Alabama assistant under Nick Saban who brings a program to national prominence. The Vols are getting there, but Georgia is already a top-three program. This defense returned six starters from a unit that held its opponents without points on 82.4% of drives, which was second only to Ohio State. And you saw what they did to a very good Auburn team last week.

Tennessee, which had 232 rushing yards in its win over Missouri last week, isn’t going to do as well here; trust us when we say that. maybe it’s more like the 70 net yards they had in last year’s meeting, a 43-14 Bulldog win. There was so much talk about whether Smart had a solution at quarterback. Maybe he does with junior college transfer Stetson Bennett. We have the feeling that all he has to do is avoid dumb mistakes and this Georgia defense and running game can take care of the rest. Until Tennessee can show us that they can elevate themselves against higher quality opposition, we’re okay with laying points with a team the quality of GEORGIA.

It is obviously worthwhile to note that Nick Saban is 20-0 against his former assistants. Lane Kiffin fits that category, and perhaps in this case, owing to Kiffin’s penchant for not always getting along to get ahead, Saban might be motivated to rub it in a bit. There is no doubt that ‘Bama is in good form; you’re not going to roll up 544 yards and 52 points against a team like Texas A&M if you’re not.

So the question really becomes whether this number is a bit to high for a very “public” team (Alabama) to lay on the road. Kiffin may “grate” on some people, but you can’t deny that he is artful, so don’t disqualify that he can use some of Saban’s philosophies against him. Saban, however, has not forgotten losing a pair of games to the Rebels in 2014 and 2015, and in the subsequent four meetings, the Tide has averaged 59 points a game.

Ole Miss is, at best, a work in progress on the defensive side. And we wonder whether Matt Corral, a holdover from the previous regime, is the right guy to run Kiffin’s offense. Alabama’s stop unit will provide that litmus test. Since we don’t think Saban will take his foot off the pedal, we’ll lean toward an OVER.