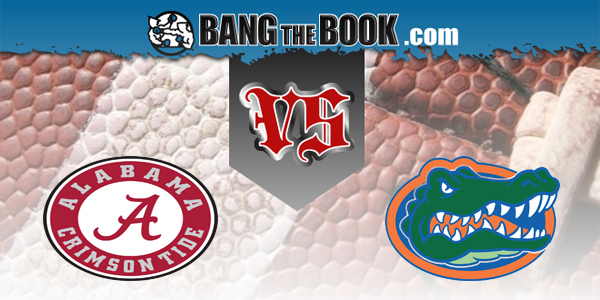 Nick Saban has had one of the more glittering records in college football history. But he may be sitting with one his best, most dominant teams ever. And the Alabama Crimson Tide (10-0 SU, 8-2 ATS), holding the #1 spot in both major polls, will punch its ticket into the four-team college football playoff with a win in the SEC Championship game.

The opposition is supplied by the Florida Gators (8-2 SU, 4-5-1 ATS), who were thought to be a national title contender at the season’s outset, but have slipped a couple of times. The kickoff is scheduled for 8 PM ET at Mercedes-Benz Stadium in Atlanta.

By the way, if you are a BetAnySports customer, you can get reduced juice for better odds and place wagers in real time after the game starts when accessing the state-of-the-art software from Sports Betting Prime.

Kyle Trask, the Florida quarterback, is a bona fide Heisman Trophy contender; he’s thrown 40 touchdown passes and a nice average of ten yards a pass. And he’s only tossed five INT’s in 369 attempts. The Gators’ ground game is not dominant by any means; Dameon Pierce (4.7 ypc) leads it, and Malik Davis is a double-duty guy (4.8 ypc, 12.7 yards a catch).

It’s Florida’s group of receivers that has been a threatening presence. Explosion comes from sophomore wide receiver Jacob Copeland (20.4 yards per reception), not to mention Trevor Gaines and Kadarius Toney. And then there is Kyle Pitts, one of the more elite tight ends in the country, who had to sit out last week against LSU but should play this week. Pitts has averaged 17.8 yards a catch with eleven touchdowns, so he’s plenty difficult to cover.

Florida’s two losses have both come by three points; last week they outgained LSU 609-418 but committed three turnovers, including a pick-six thrown by Trask. And then their defense failed them against Texas A&M (gave up 543 yards).

It’s that defense that makes the Gators vulnerable against an Alabama attack that rings up points like a pinball machine.

In the college football betting odds on this SEC Championship game, as they are posted at BetAnySports, the Tide is laying a lot of points:

Florida may have been able to at least hope for a spot in the playoff, even after the loss to A&M, and they helped their case with a 44-28 win over Georgia. But all that went out the window with the loss to LSU, which is the defending national champions but having a dismal year.

Alabama did not make it to the playoff last year, and the 35-16 win over Michigan in the Citrus Bowl was cold comfort. Saban has compiled a 167-23 record in Tuscaloosa, so he’s not “settling” for anything.

This is a team that lost talent like Tua Tagoavailoa, Henry Ruggs and Jerry Jeudy to the NFL, and still managed to average 49.5 points a game. They were so prolific that no team got closer than 15 points to them.

Mac Jones may just win the Heisman. He completed 76.4% of his passes, with 11.7 yards per attempt and 27 touchdowns. He may be the best deep thrower in the country, so the Tide truly stretches the field.

And they can punch you in the mouth too. Najee Harris has been a spectacular running back, averaging 5.9 yards a pop with 22 touchdowns. He reminds offensive coordinator Steve Sarkisian of Derrick Henry. And it helps when you have the nation’s best offensive line, led by All-America tackle Alex Leatherwood.

And to think they have done all this without all-purpose threat Jaylen Waddle, who was lost for the season with an injury.

We realize that the Tide defense is not quite as good as they’ve shown in some recent seasons. But we also know that they are going to get some points here. And the level of confidence we have in Florida’s ability to slow down quality offenses is not high. But don’t confuse them with, say, Ole Miss. These offenses are exciting, but bettors might be too enthusiastic about them. This total seems a bit bloated, so we’ll buy in on the UNDER.