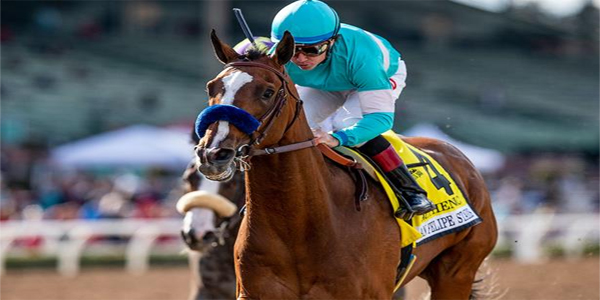 The announcement that the Belmont Stakes would take place on June 20 took away some of the luster from the Grade 1 Santa Anita Derby, which was rescheduled for June 6 after missing its original April 4 date as one of the premier Kentucky Derby prep races. Between that and some trainers opting for the spring meet at Churchill Downs and a trip to New York in advance of the Belmont, only seven horses are in the Santa Anita Derby field.

Now, let’s look at Race 8, as some top-notch three-year-olds lock in for the Runhappy Santa Anita Derby and put together a $10 Bet Slip:

The three-year-old son of Into Mischief is the 4/5 favorite here as Authentic has the long trip to the first turn, but is 3-for-3 in his young career. Honor A.P, who was second to Authentic in the San Felipe Stakes at Santa Anita just before the lockdown, is the clear second favorite at 9/5.

It certainly seems like the profit on Saturday could come from the Pick 3, 4, or 5 or from what you manage to get underneath in exotics. Baffert could really use a big run from Authentic here since Nadal was forced to retire due to an injury. Of course, all eyes will be on Baffert’s Cezanne in the sixth race, so it could be a big day for Baffert three-year-olds after a tough couple of weeks with Nadal and Charlatan’s banned substance test.

Anyway, we’ll look and see if we can get anything underneath or find a stunner to upend Authentic and Honor A.P.

Friar’s Road (20/1) looks like every bit of the longest shot on the board with the rail post and a jockey switch. Flavien Prat had ridden Friar’s Road the last two times out to second-place finishes, but Prat switches to Michael McCarthy’s Rushie here. This is the stakes debut for Friar’s Road with some of the weakest speed numbers in the race.

Rushie (8/1) draws the 2 post and looks to be an early pacesetter. Prat has not ridden Rushie, a two-timer winner with a maiden at Santa Anita in February and a win last time out, outdueling Candy Tycoon with Joel Rosario in the mount at Oaklawn Park. Rushie was second on March 14 to a horse named Charlatan, who won by 10 1/4 lengths in an allowance optional claiming.

Rushie has one of the best speed figures in the race outside of the favorites, posting a 101 Equibase figure back in his maiden win, but the last two runs wouldn’t get it done here. McCarthy does have a strong rider and a good hope of hitting the board, but beating one of the top two seems virtually impossible.

Shooters Shoot (8/1) was scratched from the Arkansas Derby with a fever, but it did prevent the son of Competitive Edge from what probably would have been a finish well off the pace. Shooters Shoot needed five races to win a maiden, including a second-place finish to Charlatan nearly six lengths behind. He’s won his last two races with decent speed numbers.

Abel Cedillo is back in the mount after Peter Eurton opted to go with Joe Talamo at Oaklawn in an AlwOC last time out. It is possible that the three-year-old is turning a corner and we’ll find that out here against some stiff competition. The last two runs have been nice.

Anneau d’Or (15/1) might be the most disappointing three-year-old in the country. A really strong second-place finish as a 28/1 shot in the Breeders Cup Juvenile and a second-place to Thousand Words as the favorite in the Los Alamitos Futurity have not carried over to his 2020 season. Anneau d’Or was ninth in the Risen Star as the favorite and fifth in the Arkansas Derby. He ran 9 1/2 lengths behind Charlatan in what was a terrific field.

The workouts at Golden Gate have been pretty good in the lead-up to this race and Victor Espinoza draws the first-time mount. Is that enough for Anneau d’Or to finally live up to his potential? He’s had two terrible rides since the calendar turned over, but his Arkansas Derby trip was better than his Risen Star ride.

Azul Coast (15/1) may not be getting enough respect. The son of Super Saver does not have a name-brand jockey in Umberto Rispoli, but Bob Baffert has given him the ride in this one. After a maiden win in December, Azul Coast put forth a big effort in the Sham Stakes finishing a distant second to Authentic. He was the winner in the El Camino at Golden Gate in February as a short favorite.

Azul Coast has been the favorite in two of three races and the second choice behind Authentic in the Sham and has finished first twice and second once. Now he’s 15/1 with the 31-year-old Rispoli in the mount. Rispoli’s agent, Ron Anderson, is also the agent for Joel Rosario and he got his client on Azul Coast here in a big race. This is hardly a throwaway horse for Baffert and he’s run really well as a closer. This is his first test at 1 1/4 miles, but the workouts have been pretty good.

Honor A.P (9/5) is going to be popular at the window in exactas and probably some Pick 3 and Pick 4s. It doesn’t hurt to have Mike Smith in the mount and the son of Honor Code ran second to Authentic here in the San Felipe. He never really challenged, though. He was about two lengths off the pace for most of the race, as one of seemingly many Baffert three-year-old prize winners went gate to wire.

Honor A.P. won his maiden as a massive favorite, but this is just his second stakes race and he didn’t seem to have nearly enough to get after Authentic. It makes sense to have him the clear second favorite, and Smith is plenty familiar with all three previous mounts, but there is a chance that Authentic pins him inside and he’ll have to fight a lot of traffic.

Authentic (4/5) is supposed to win this race. He’s 3-for-3 already and has gone essentially gate to wire in the last two races. Nobody really challenged. He even had a below average start in the San Felipe and still ran out for the win. Jockey Drayden Van Dyke is 3-for-3 on Authentic as well. The son of Into Mischief is definitely the horse to beat here.

Something bad would seem to have to happen to Authentic for him not to win. He has effortless speed and hasn’t really been all that tested to this point.

How the finish goes after Authentic will be the interesting part. Azul Coast really intrigues me. He’s a closer, having extended his lead in his maiden, going from fifth to second in the Sham, and then going from 2 1/2 lengths midway through the El Camino to a win by 1 1/4 lengths. Azul Coast would nicely bump up the Exacta price on Authentic as well.

There’s a reason that Baffert pointed Azul Coast to this race on a 3.5-month layoff.