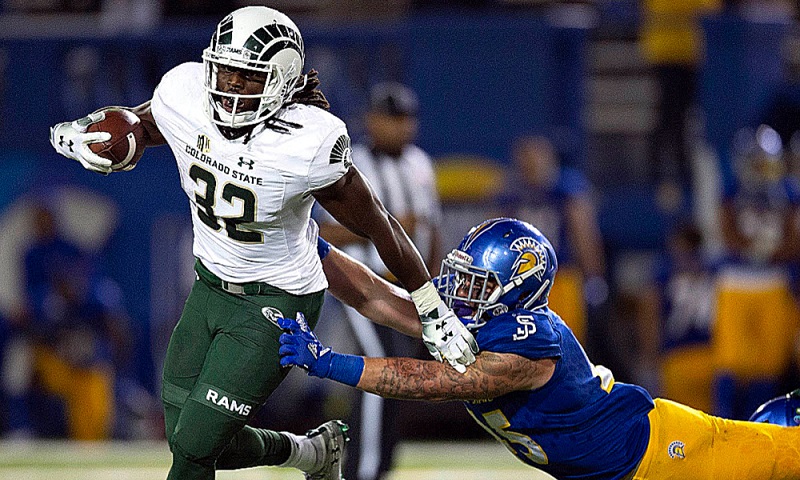 The 2021 college football betting action is heating up Saturday, October 9, with Week 6 matchups around the country, including the Mountain West Conference showdown at Canvas Stadium in Fort Collins, Colorado, so here’s the best San Jose State vs. Colorado State betting pick.

These two schools meet each other for the first time since 2018, and the Rams are undefeated in their last three matchups with the Spartans. Colorado State opened as a 2.5-point home fave on MyBookie Sportsbook, while San Jose State is a +110 moneyline underdog with a total of 46.0 points.

The San Jose State Spartans (3-2; 1-4 ATS) beat New Mexico State 37-31 last Saturday but failed to cover a huge 25.5-point spread in front of the home fans. The Aggies cut the deficit to just two points with 11:51 left on the clock in the fourth quarter, so the Spartans should be happy with a narrow victory.

San Jose State ran for 209 yards on 36 carries but surrendered 300 passing yards to the Aggies. Senior RB Tyler Nevens had 22 totes for 115 yards and a TD; sophomore QB Nick Nash went 15-of-18 for 193 yards and three touchdowns in his first start under center, while senior wideout Derrick Deese Jr. added seven receptions for 130 yards and a TD.

With senior QB Nick Starkel (upper-body injury) on the shelf, Nash will get another starting call Saturday against the Rams. Interestingly, Nash rejoined the quarterback room last weekend after playing as a wide receiver in the previous two weeks.

Colorado State hopes to build on its Week 4 performance

The Colorado State Rams (1-3; 2-2 ATS) are coming fresh off a bye, looking to get back on the winning path after a 24-14 defeat at No. 5 Iowa in Week 4. They fought bravely against one of the best defensive teams in the nation but couldn’t upset the Hawkeyes, still covering a 23.5-point spread on the road.

The Rams had a seven-point lead at halftime and failed to score in the second half. They racked up 250 total yards while surrendering just 278 in a return. Back in Week 3, the Rams smashed Toledo as 14.5-point road underdogs, 22-6, holding the Rockets to only 291 total yards.

Colorado State is now yielding 24.0 points on 344.3 total yards per game. The Rams are tallying 20.0 points on 369.5 total yards in a return, and senior RB David Bailey is leading the way with 72 touches for 323 scrimmage yards and four touchdowns.

The Spartans are scoring just 21.8 points per game while yielding 22.2 in a return, and with both teams leaning on their defenses while struggling to score, I would avoid the side bet and take the totals instead.

Frankly, this game could easily go either way. The visitors will probably miss their starting QB which seems like a big issue in a matchup with the Rams, but the Spartans’ defense is capable of dealing with Colorado State’s ground game. Anyway, the Rams are coming off a bye and should have more gas in the tank than their rivals.

The under is 5-1 in the Rams’ last six showings as favorites, 6-1 in their last seven games played on Saturday, and 11-5 in their previous 16 games overall. On the other side, the Spartans’ last five road tilts went in the under, as well as nine of their last 11 games overall.

Despite the line at 46.0 points, backing the under seems like a way to go in this Mountain West Conference matchup. The Rams’ last three games produced fewer than 46 points each, as well as three of the Spartans’ last four contests.