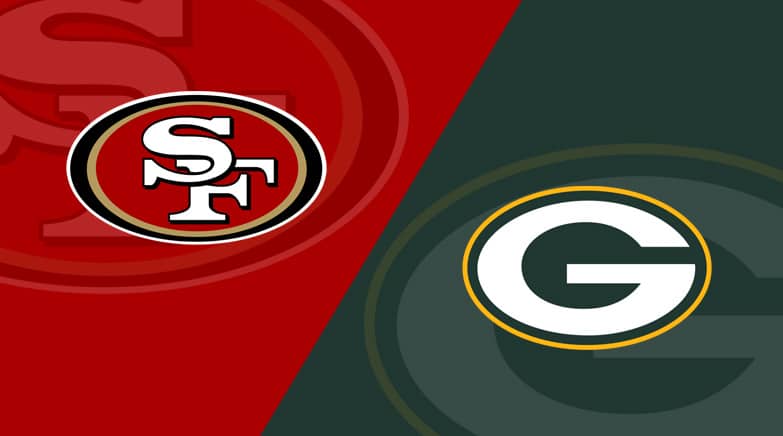 The 2022 NFL Divisional Playoffs begin Saturday, January 22, 2022, so we are taking a closer look at the NFC showdown from Lambeau Field in Green Bay, Wisconsin, to get you the best 49ers vs. Packers betting pick and odds.

San Francisco meets Green Bay for the second time this season. Back in Week 3, the Packers outlasted the 49ers 30-28 as 3-point road underdogs to record their fourth win in the last six encounters with San Francisco. According to Bovada Sportsbook, Green Bay is a firm 6-point home fave for Saturday’s contest, while the totals are listed at 47.0 points.

The Niners stunned the Cowboys in the wild-card round

The San Francisco 49ers (11-7; 10-8 ATS) are coming off a 23-17 road victory over the Dallas Cowboys in the NFC Playoffs wild-card battle. Playing as 3.5-road underdogs, the Niners dominated the Cowboys all night long but nearly blew a 16-point lead in a chaotic finish.

Jimmy Garoppolo went 16-of-25 for 172 yards and a costly interception. Brandon Aiyuk had five receptions for 66 yards, while Elijah Mitchell and Deebo Samuel combined for 168 rushing yards and a couple of touchdowns on 37 carries.

Samuel has been outstanding in the last few weeks, scoring a TD in four of his previous five appearances. The 49ers finished the regular season in strong fashion, going 5-1 straight up and ATS over their last six contests at any location.

San Francisco has some injury worries ahead of the divisional round. Defensive end Nick Bosa is in the concussion protocol, and his eventual absence would be a massive blow for the 49ers’ defense. DL Jordan Willis (ankle) is questionable to play as well.

The Packers look to get back on the winning track

The Green Bay Packers (13-4; 12-5 ATS) enjoyed two weeks of rest after finishing top of the National Football Conference. They rested most of their key players in Week 18 and suffered a surprising 37-30 defeat at the Detroit Lions to stop their five-game winning streak.

Aaron Rodgers finished the 2021 season with 4,115 yards, 37 touchdowns, and only four interceptions. It was another tremendous display by the reigning MVP, while Davante Adams had 123 receptions for 1,553 yards and 11 touchdowns.

Rodgers and Adams have been unstoppable all season. In that narrow win at San Francisco, Adams had 12 catches for 132 yards and a TD, while Rodgers tossed for 261 yards and a couple of scores.

WR Marquez Valdes-Scantling didn’t practice on Wednesday, so his status for Saturday’s clash is in limbo. Left tackle David Bakhtiari (knee) is questionable to play, too, while Randall Cobb should be back in action after missing the previous five games with a core muscle injury.

The previous duel between the Niners and Packers was a wild one. Green Bay blew a 17-point lead on the road but managed to escape with a win thanks to Mason Crosby’s 51-yard field goal as the time expired.

I’m expecting the Packers to grab another win over San Francisco, but covering a 6-point spread could be a tricky job. The 49ers have been outstanding in the second half of the regular season, and Kyle Shanahan’s boys look ready to rumble. If Nick Bosa suits up, San Francisco’s defensive line will torture the Packers’ offensive line, as the Niners love to be physical. It seems like Jimmy Garoppolo could be the weakest link in this San Francisco team.

On the other side, Aaron Rodgers and Davante Adams will certainly continue to dominate their rivals. Still, the Packers have to put on a strong defensive performance in order to comfortably beat the Niners.

While the under is 5-1 in San Francisco’s last six outings, the over is 6-1 in Green Bay’s previous seven. When it comes to their head-to-head duels, the total has gone over in four of the previous five, and I would follow this betting trend.

The Niners will struggle to keep the Packers below 28 points. Green Bay has scored 30 or more in six of its previous seven contests. On the other side, the Packers allow 4.7 yards per carry (tied-29th in the NFL), so the 49ers know they have to run the pigskin as much as they can.