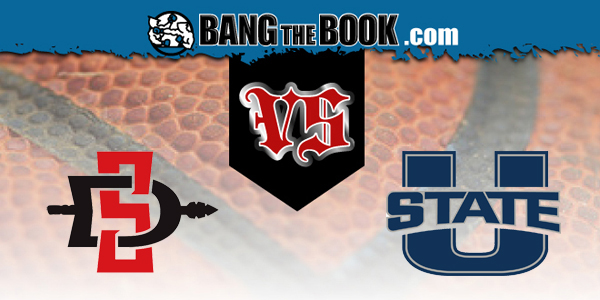 We’ve had a couple of nice winners on Toledo -11 and Under in last night’s Texas A&M vs. Mississippi State matchup the last two days. Let’s see if we can make it three in a row with our spotlight game previews at BangTheBook.com.

Usually I’d write up the latest game on the card, which is a good one tonight between BYU and Saint Mary’s, but I’m not sure I have a position that I like in that 11 p.m. ET tip. Instead, we’ll look at a game I do like and focus on San Diego State vs. Utah State.

Utah State is -2 at MyBookie Sportsbook with a total of 131 in arguably the most fascinating game of the Thursday night card.

CBS Sports Network, which broadcasts a lot of Mountain West College Hoops will be on the call for this 9 p.m. ET tip-off.

This is the first game of a critical MWC set between San Diego State and Utah State. Brian Dutcher’s Aztecs suffered a setback in their first MWC game, but have won three straight since. Outside of the lower-division team from St. Katherine, SDSU has played teams that are all ranked in the top 135 per Bart Torvik. Their worst opponents was Pepperdine and they won 65-60, despite shooting 2-of-19 from deep.

San Diego State has played the 71st-ranked schedule per Torvik to this point and has a 9-3 record with that 3-1 mark in conference play after sweeping a home set with Nevada a week ago. The Aztecs do a good job forcing turnovers with a 22.2% TO% on defense. They’ve also held opponents under 46% on two-point shots. They’ve had nice wins over Saint Mary’s, UCLA, and Arizona State to go with losses to BYU and Colorado State. They did get revenge on the Rams the next night.

It’s not like the Aztecs are unfamiliar with playing in altitude, but they have not done it yet this season. They’ll do it for the next four games with two in Logan and then two in Colorado Springs against Air Force. This will be a contrast in styles, as San Diego State ranks 325th in adjusted tempo and Utah State ranks 143rd.

San Diego State takes a lot of threes. They’ve shot the ball well on those at 37.7%, which ranks 36th nationally. Their 3P Rate is 43.5% and that measures the percentage of three-point attempts against all field goal attempts. On three separate occasions, the Aztecs have hit at least 13 threes in a game. This, though, will be just their second true road game of the season.

Utah State is on one right now. The Aggies have beaten six straight conference opponents by an average of 35.1 points per game. That’s not a typo. Utah State beat San Jose State by 45 and 44, Air Force by 35 and 19, and New Mexico by 32 and 36. Those are also three of the worst teams in this conference this year.

To say that this is a step up for the Aggies is an understatement. All you can do is beat the teams in front of you and exceeding expectations against those teams is a great thing, but the Utah State squad, which has held 10 straight opponents under .95 points per possessions and seven straight under .83 PPP, will be tested more here.

In the games against VCU, South Dakota State, Northern Iowa, and BYU, easily the four best opponents they’ve played, the Aggies allowed a 3P% of 42.7%. Even College of Idaho was 12-of-34 in the next game.

This is such an intriguing game. Utah State’s numbers are heavily skewed by dominating some pathetic offensive teams in San Jose State, Air Force, and New Mexico. San Diego State is not pathetic offensively at all. When Utah State played decent competition, they struggled badly to guard the perimeter.

That’s why I’m looking at the over here. I would anticipate Utah State scores some points and their defensive numbers are really weighted towards their recent performances against awful foes. VCU had 1.158 PPP and South Dakota State had 1.185. Northern Iowa had .94 and BYU had .919, so those weren’t great offensive performances, but Utah State probably controls the tempo of this game at home, which means it should play to around 68 or 69 possessions.

If we conservatively put both teams around 1 PPP, that puts us in the upper 130s and that’s all we need, without even considering the likelihood of fouls late in a close game.

I don’t really have a side lean, as this game could go either way, but I do like the over.