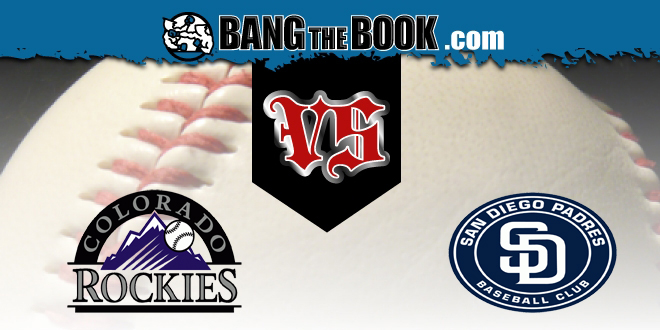 There is a lot of pressure on German Marquez in Saturday’s start against the San Diego Padres. The Colorado offense has been horrible away from home, scoring just about three runs per game. That means that Marquez has very little margin for error as the Rockies take on the Padres.

Joe Musgrove gets the call for the Friars, which will make scoring runs even harder for Colorado. Even with that in mind, the line seems relatively low with the Padres priced in the -180 range at Bookmaker Sportsbook and a total of 7.5 at Petco Park for one of three late games on July 10.

The Rockies actually won a game on the road on Thursday. That win improved their road record to 7-32. The excitement was short-lived, as the Rockies lost to the Padres in what became a bullpen game for the San Diego squad when Blake Snell was scratched due to complications from his recent bout with food poisoning.

That could help the Rockies here, as they’ve been able to see just about every bullpen arm for San Diego throughout the season to this point. To be honest, the Rockies will take any advantage, big or small, that they can get on the road. Entering Friday’s game, Colorado had a .258 wOBA on the road. That was the worst mark in baseball by 20 points. Their 60 wRC+ was the worst by 13 points.

That is a historically bad level of road offense. To make matters worse, the Rockies also have the highest road ERA of any pitching staff. They seem to have conquered the hardships of pitching at Coors Field, but they have not been able to master pitching closer to sea level this season.

Look no further than German Marquez to see how split-driven this season has been for Colorado. Marquez has a 3.06 ERA at home in 70.2 innings with a .258 wOBA against. He has a 4.67 ERA with a .317 wOBA against in 34.2 innings on the road. Marquez actually has a 4.10 FIP on the road and has been negatively impacted by a 66.7% LOB% in the small sample size away from home.

The odd part of it all is that Marquez has a career ERA of 4.70 at home with a .325 wOBA against and has a 3.61 ERA with a .296 wOBA against on the road. He has been demonstrably better at home most seasons, but that is not the case this year.

The Padres offense has been firing on all cylinders lately. After underachieving most of the season despite a lot of hard-hit contact, San Diego’s offensive fortunes finally seem to be going in a positive direction. Throughout the year, the Padres have been in the top five in Hard Hit%, which is a measure of the percentage of batted balls hit at least 95 mph. San Diego still ranks 28th in batting average and wOBA on that hard contact, but things have started looking up.

The Padres do deserve a better fate. Not only have they made a lot of hard contact, but they also draw a lot of walks and have limited their strikeouts throughout the course of the season. The crazy thing is that San Diego is solidly in the top 10 with men in scoring position. There is no rhyme or reason as to why this isn’t one of the best offenses in baseball.

Things do seem to be trending upwards, though, and that should be scary for the San Francisco Giants and the Los Angeles Dodgers, as those three teams battle it out the rest of the way for NL West supremacy.

It hasn’t really mattered to Joe Musgrove whether or not he gets offensive support. Musgrove has a 2.97 ERA with a 3.51 FIP in his 94 innings of work. The right-hander has struck out 110 and walked 23 in his 16 starts and one relief appearance when the team needed him to log some innings to spare a tired bullpen.

The Padres will be looking for an extended start from Musgrove here. Yu Darvish was battered by the Nationals on Thursday and then Blake Snell was scratched on Friday, so those two games put some extra strain on the bullpen. This is when aces need to be aces.

And Musgrove should be an ace here. The matchup certainly looks very good for him against a road Rockies team that plays like a Double-A offense outside of Coors Field. The presence of Marquez is keeping this line low, along with the expectation of a low-scoring game, but this line is definitely too cheap, as the Padres have advantages all over the field.