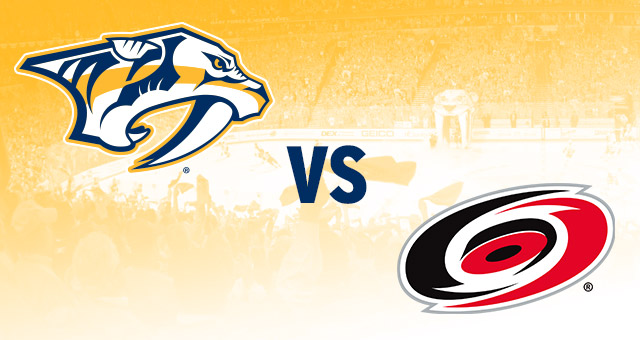 Wasn’t it great to see Bridgestone Arena full of fans? The NHL Playoffs are built on big moments and the overtime game-winners from Matt Duchene and Luke Kunin felt so much more special with a loud, raucous group in attendance. Most importantly, though, it sent the Predators back to Carolina with a 2-2 series tie.

The all-important Game 5 swing game is on Tuesday night in Raleigh, where a big, supportive crowd awaits the return of the Hurricanes. Carolina is a significant home favorite in the -200 range at BetUS Sportsbook with a total of 5.5 for the May 25 matchup.

Let’s take a look at how Game 5 sets up and see if the Predators can make it three in row or if the Hurricanes put them on the brink of elimination.

This has been a much more even series than anybody could have imagined. Based on the first two games, it looked like the Predators were in a heap of trouble. Carolina won 5-2 and 3-0 in the first two games and looked to have something of a hammer lock on the series early on. The Hurricanes were getting better goaltending from Alex Nedeljkovic and the only power play goal. Nashville was 0-for-10 on the power play through two games.

Now the series is tied. Nashville would be wise to do more on the power play for however long this series goes, as they’ve had 19 opportunities and have only scored two goals. Carolina, meanwhile, is 2-of-14. Nashville decided to play a little bit more wide-open of a game at home instead of trying to contain Carolina and they managed to outscore the Hurricanes.

The question now is what they can do back on the road, where they won’t have the last line change. Juuse Saros stopped 58 shots in the Game 4 win and now has a .929 SV% in the series. Saros has faced a lot of rubber in this series with 184 shots against. He’s been under constant duress. He’ll have to continue to stand tall if Nashville wants to avoid the prospects of elimination in Game 6.

The Hurricanes have outshot Nashville comfortably at 5-v-5 in three of the four games in this series. The biggest thing for Carolina is staying out of the box. Giving Nashville 19 power play chances in four games is unacceptable. It’s pretty clear that Nashville is having a hard time keeping up at 5-v-5. Carolina just needs to keep throwing pucks at Saros and do so in better game states, like 5-v-5 or on some power plays of their own.

First-time playoff starter Alex Nedeljkovic has stopped 142 of 153 shots in the series. Even though these have been high-scoring games, these have also been games with lots of shots on goal and a couple overtimes to lower the goals against averages. It will be interesting to see how Nedeljkovic bounces back from the two Nashville games, which were not his fault at all, but both tough losses in overtime for a young kid in the spotlight.

One of the things that has hurt the Hurricanes in this series is that they’ve taken a lot of point shots with limited value. Most of their goals have come from either way outside the dots or in the heart of the slot. Saros’s rebound control has been solid and the Predators have been able to clear the front of the net. The Hurricanes need to funnel more pucks to the middle of the ice.

For all the shots Saros has faced, he has only allowed 16 rebound attempts against. The Hurricanes need cleaner shots from high-percentage scoring areas. We’ll see if they get more in Game 5.

Carolina should win Game 5, but the Hurricanes have not looked like a team deserving of a -190 price tag. In that respect, the Predators have a little bit of line value. Juuse Saros has played well and the team has done well to clear out the front of the net. The total of 5.5 is a little suspect given how the last two games have gone, but I prefer taking a gamble on the Predators at the big underdog number.