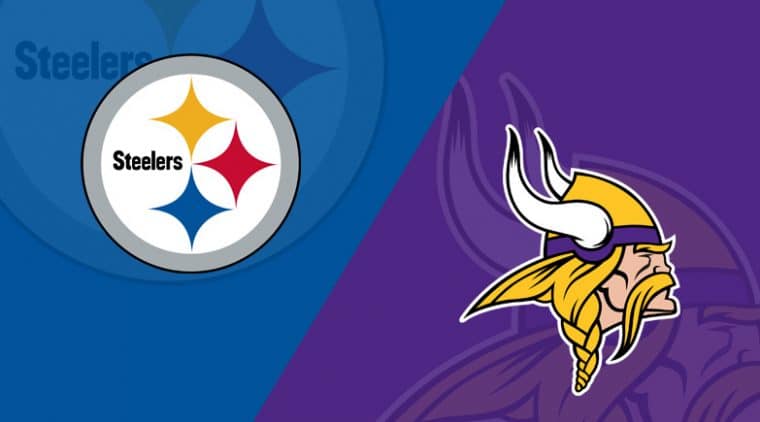 Week 14 of the 2021 NFL season kicks off with Thursday Night Football from U.S. Bank Stadium in Minneapolis, so we bring you the best Steelers vs. Vikings betting pick and odds along with the latest team stats and betting trends.

Pittsburgh meets Minnesota for the first time since 2017, and the Steelers have won four of their previous five encounters with the Vikings. According to BetOnline Sportsbook, the Steelers are 3.5-point road underdogs for this one, while the Vikings are -170 moneyline dogs with a total of 44.5 points.

The Steelers upset Baltimore to snap their winless streak

The Pittsburgh Steelers improved to 6-5-1 SU and 5-7 ATS on the season following a 20-19 home victory to the Baltimore Ravens in Week 13. After a pair of losses and a tie over their previous three outings, the Steelers finally found a way to grab a win and get back in the playoff hunt.

Pittsburgh beat Baltimore thanks to its defense that prevented the Ravens’ two-point conversion with 12 seconds left on the clock in the fourth quarter. The Steelers kept the ball in possession for only 23:30 and were pretty lucky to escape with a win, but their defense stepped up after allowing 82 points through Weeks 11 and 12.

On the offensive side of the ball, Pittsburgh managed to rack up 85 yards on 25 carries against the Ravens’ stout run defense. Ben Roethlisberger completed 21 of his 31 pass attempts for 236 yards and a couple of touchdowns, while Diontae Johnson enjoyed a wonderful game and finished with eight receptions for 105 yards and two scores.

The Vikings suffered a shocking loss in Week 13

The Minnesota Vikings dropped to 5-7 SU and 6-6 ATS on the season following a 29-27 defeat at the Detroit Lions this past Sunday. Playing as 7-point road favorites, the Vikings allowed the Lions to get their first win in 2021 and lost WR Adam Thielen in the opening drive due to an ankle injury.

Thielen, who’s scored ten receiving touchdowns in 2021, is doubtful to play against the Steelers, so Minnesota will have to lean Justin Jefferson a lot. The Vikings are without Dalvin Cook (shoulder), who was a limited practician on Tuesday, while both LB Anthony Barr and CB Patrick Peterson returned to full practice.

Justin Jefferson had 11 receptions for 182 yards and a TD last weekend. He’s already accounted for 1,209 yards and seven scores in 2021, surpassing a 100-yard mark in three of his previous four outings. Kirk Cousins completed 30 of his 40 passing attempts for 340 yards and a pair of touchdowns against the Lions, but he also lost a fumble.

The Detroit Lions are 1-10-1 in 2021. They beat Minnesota and earned a 16-16 home tie against Pittsburgh in Week 10. Well, that tells a lot about both Minnesota and Pittsburgh, and with three and a half points on the table, I’m going to take the underdogs and hope for a dramatic finish.

The Vikings are in a must-win situation, and it’s hard to trust them under pressure. The Steelers’ defense has recovered after a couple of awful displays, so Pittsburgh should be able to deal with the Vikings’ offense and keep it close down the stretch.

Both teams struggle to defend rushing, so they should move the ball easily in this matchup. The Steelers are bottom in the league in yards allowed per carry (4.8), and the Vikings are right above them (4.7).