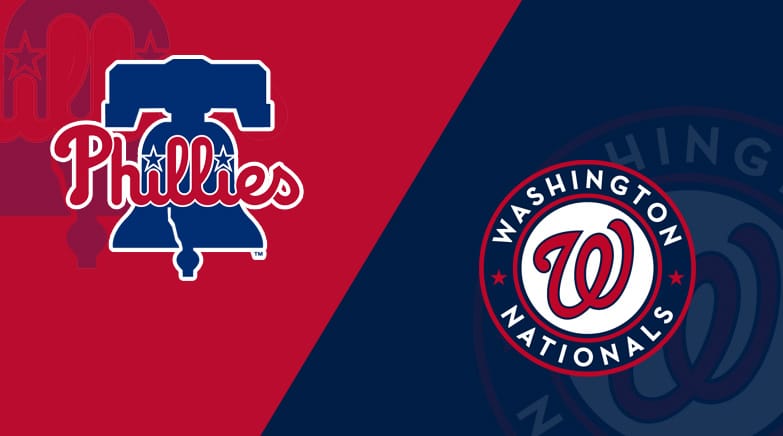 The Philadelphia Phillies and Washington Nationals wrap up their regular-season series Thursday at Nationals Park in Washington, D.C. They had to postpone Wednesday’s closer due to inclement weather, so we’ve prepared the best Phillies vs. Nationals betting pick and odds.

The visitors opened as -159 favorites on BetDSI Sportsbook, while the Nats are +147 moneyline dogs with a total of 8.5 runs. Philadelphia is 12-6 against Washington in 2021, and the Phillies are undefeated in seven straight encounters with the Nationals.

The Phillies have won six straight games at Nationals Park

The Philadelphia Phillies are riding a five-game winning streak following a 12-6 victory at Washington last Tuesday. After a 7-4 win in Monday’s opener of a three-game set at Nationals Park, the Phillies’ offense put on a show, smacking three two-run homers and finishing with 18 hits and 32 total bases. It was their sixth straight road win over Washington, and the Phillies improved to 68-64 on the season to get just 2.5 games behind the NL East-leading Atlanta Braves.

Aaron Nola will get the Nationals on Thursday, and the 28-year-old righty is 6-7 with a 4.08 ERA in 23 career starts against Washington. He met the Nats once in 2021 and got pounded for five earned runs across five frames of work in a 7-6 victory at Nationals Park.

The Nationals are already on vacation

The Washington Nationals dropped to 55-76 on the season following that heavy loss to the Phillies on Tuesday. The Nats extended their losing streak to four games, and they’ve won just two of their previous ten games overall.

Paolo Espino (4-4; 4.13 ERA) will toe the rubber Thursday, and the 34-year-old righty is 0-1 in one start and three relief appearances against the Phillies this season. He’s allowed eight earned runs on ten hits and a couple of walks through nine innings of work. Back on August 4, Espino got beaten hard by the Phillies, yielding six earned runs in five frames.

The Phillies are swinging a hot bat at the moment. Before they dropped 12 runs on the Nats last Tuesday, the Phillies had scored seven runs in four straight outings. They’ve tallied 47 runs over the last six outings while slashing .300/.383/.547.

Philadelphia cannot lean on its pitching staff, but the Phillies still have more firepower in their bullpen than the Nationals. Also, Paolo Espino hasn’t been sharp through his five starts in August, tallying a poor 7.45 ERA while surrendering a 1.015 OPS to his opponents.

I’ve mentioned the Nationals’ pitching woes. Their bullpen has registered a disappointing 5.21 ERA and 6.16 FIP over the last couple of weeks. Hereof, I’m backing the over on the totals, expecting the Phillies to score a bunch of runs.

On the other side, the Nationals haven’t impressed offensively as of late, but they should be able to score a few runs in this matchup. Aaron Nola has allowed two or more earned runs in each but one of his last six starts, while the Phillies bullpen cannot be trusted despite a 3.83 ERA and 2.85 FIP in the past two weeks of action.