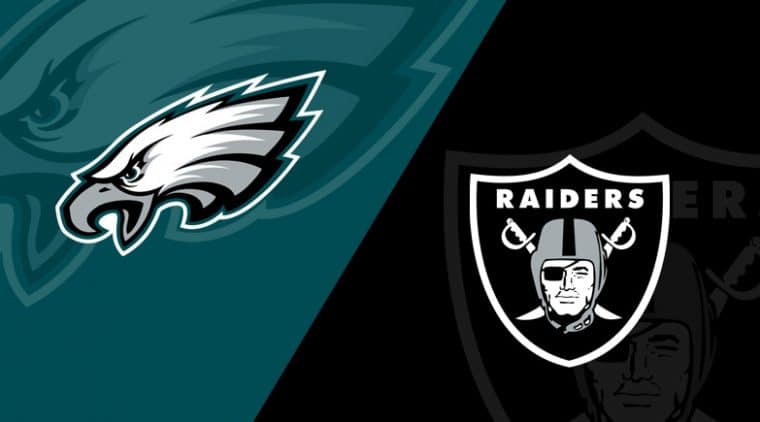 Week 7 of the 2021 NFL season continues Sunday, October 24, so we’re taking a closer look at the interconference showdown from Allegiant Stadium in Las Vegas to get you the best Eagles vs. Raiders betting pick and odds.

The Eagles meet the Raiders for the first time since 2017. According to MyBookie Sportsbook, Philadelphia is a 3-point road underdog, while Las Vegas is a -150 moneyline fave with a total of 49.0 points.

The Philadelphia Eagles (2-4; 3-3 ATS) are coming off a 28-22 home loss to the Tampa Bay Buccaneers in Week 6 Thursday Night Football. They battled bravely against the reigning champs but didn’t really stand a chance of upsetting the odds, though the Eagles covered as 7-point home underdogs.

After an impressive 32-6 road victory at Atlanta in their season opener, the Eagles have dropped three straight contests before another road win in Week 5. They’ve outlasted the Carolina Panthers 21-18 as 2.5-point road underdogs, and the Phillies will be under huge pressure to pull off another upset away from home when they face off against the Raiders.

The Raiders smashed Denver to stop a two-game slide

The Las Vegas Raiders (4-2; 3-3 ATS) snapped their two-game skid with a convincing 34-24 victory at the Denver Broncos in Week 6. In their first outing under interim head coach Rich Bisaccia, the Raiders dominated their divisional rivals on the road, building a 21-point lead by the end of the third quarter.

Derek Carr led the way for Las Vegas, tossing for 341 yards and a couple of touchdowns. Henry Ruggs had three receptions for 97 yards and a TD, while Josh Jacobs posted 16 carries for 53 yards and a TD. The Raiders put on a strong defensive performance as well, picking off Teddy Bridgewater three times.

The Raiders cannot allow another drop in their form, especially not against the struggling Eagles. Philadelphia has been all over the place despite two wins on the road, so I’m backing Las Vegas to win and cover.

Both teams have had some serious problems defending well. I think the Raiders have more firepower on the offensive side of the ball which is the main reason why I’m going with the hosts here. Of course, the Raiders will enjoy strong support from the stands, and their fans will demand a win after that impressive performance against Denver.

The under is 5-2 in Philadelphia’s last seven games overall, but the over has hit in six of the Eagles’ last seven meetings with the AFC. On the other side, the over is 8-3 in the Raiders’ last 11 contests overall and 6-1 in their previous seven outings at home.

The Raiders have allowed 20-plus points in each of their last four showings. They lean heavily on their offense, and the Eagles will struggle to slow the Raiders down. However, the Raiders’ defense should have similar problems, so give me the over on the totals.