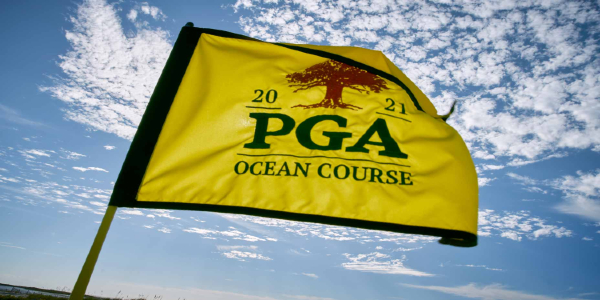 Golf’s second major of the 2021 calendar year will take place this week on the Ocean Course at Kiawah Island Golf Resort. Up to 10,000 spectators per day will be allowed on the grounds and it will be great to hear the roars for big putts and big moments. We should have a lot of them as well.

Collin Morikawa is the reigning PGA Championship winner from last August’s event at TPC Harding Park, a tournament that was moved from May to August because of the COVID-19 pandemic. This year’s tournament is going off as scheduled and will be the most attended of the PGA Tour events thus far.

Odds will be posted from BetOnline Sportsbook after the body of the article and don’t forget that you can get a 50% Deposit Bonus up to $1,000 from our friends at BetOnline to bet the major or whatever your heart desires.

Because this is the Tour’s signature major, it is a little bit more welcoming in terms of the selection criteria. The field is 156 players max and we usually get that or close to it because there are so many ways to gain entry into the field, including wins in past majors, positioning on the Official World Golf Ranking or the PGA Tour Money List, or just by simply being a winner since the last PGA Championship.

With that being said, we have a huge field this week. Recent Wells Fargo Champion Rory McIlroy is the +1200 favorite per BetOnline. Jon Rahm and Justin Thomas are priced at +1400, with Bryson DeChambeau and Jordan Spieth at +1600, and with Dustin Johnson, Viktor Hovland, and Collin Morikawa as the others with prices below +3000.

A lot of really strong players are priced in the +4000 to +6000 range here, including Will Zalatoris, Tony Finau, Patrick Cantlay, Webb Simpson, Scottie Scheffler, Tyrrell Hatton, and so many more.

The Ocean Course at Kiawah Island

This is the second time in a decade that Kiawah Island Golf Resort has hosted the PGA Championship. The other year was 2012 and tournament favorite Rory McIlroy won by eight shots at 13-under. It was the largest margin of victory in PGA Championship history.

This course is an absolute monster. It will set the record this week for the longest course to be played in a major ever, supplanting Erin Hills from the 2017 US Open. The course will play over 7,800 yards and wind will undoubtedly be a factor on the shores of the Atlantic Ocean, so some holes will play longer than listed, while others will play shorter.

Looking at course form data is pretty irrelevant here, to be totally honest. The course will play a good bit longer than it did in 2012 and a lot of the guys that are winning golf tournaments or regularly contending are either much different than they were back then or were not in the field at all.

That means we’re really just left to put together a profile of the kind of player we want to side with.

With the immense length of this course, it goes without saying that driving distance will play a huge role. There could be some three-shot holes for the guys that are shorter off the tee just to get to the green. This course is going to play tough, based on the length, but also based on the pin placements. There are likely to be some very hard to get pins.

Along with distance off the tee, proximity on 175+ and 200+ will be huge this week because you’re going to see a lot of long irons or fairway metal shots into the putting surfaces. We could see some carnage at Kiawah to be sure.

As far as some notable recent form guys, keep in mind that a lot of the players at the top of the odds board have played sparingly since The Masters. The Wells Fargo Championship at Quail Hollow was a big draw and there was a better field than expected last week for the AT&T Byron Nelson, but a lot of guys in this field have laid low more often than not.

Sam Burns is in outstanding form. Burns won the Valspar Championship and then finished second this past weekend in the AT&T Byron Nelson. He’s +5000 this week. Another player in good form lately is a much shorter price in Jordan Spieth at +1400, who won the Valero Texas Open. Same with the favorite in Rory McIlroy, who won the Wells Fargo.

As mentioned, driving distance and proximity to the hole with long irons and fairway metals will be my two most important metrics this week.

Rahm is my favorite pick this week at +1400. If The Masters had 18 more holes, Rahm probably would have won.

Another player on my list is Leishman at +6000, who grades well in key metrics here and is also a strong wind player with those expected to be a factor this week.

Lastly, I’ll also take a long shot look at Ryan Palmer at +22500. Palmer hits the ball far and has done really well to get reasonable putts with long approach shots.

Coverage of the PGA Championship will be on ESPN, ESPN+, and CBS this week.

BETTING ODDS FOR THE 2021 PGA CHAMPIONSHIP