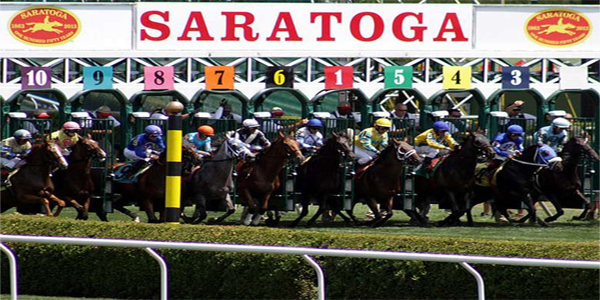 The altered calendar for the Road to the Kentucky Derby has been quite a roller coaster. We’ve got a new wrinkle to add to the list this week.

The Peter Pan Stakes will be held at Saratoga Race Course for the first time in the history of the race. It isn’t being held during the second week of May as it usually is, so it now becomes a Kentucky Derby and Preakness Stakes prep race instead of the last race before the Belmont Stakes. The Belmont Stakes has already been run.

The Peter Pan was held at Belmont from 1940-60 and then got shelved until 1975 when it came back for one year at Aqueduct. It should return to Belmont Park next year, but it will not be there this year.

All in all, this is a pretty good Grade 3 field. Lightly-raced Caracaro comes with a strong bloodline and Godolphin-bred Mystic Guide is thought to have a lot of untapped potential. Risen Star Stakes winner Modernist has disappointed in his last two runs, but many love the potential. Same with Country Grammer, who gets a new rider in Irad Ortiz Jr.

We’ll take a look at all nine horses and put together a $15 Bet Slip for the race.

1. Mo Hawk (20/1) – Mo Hawk was previously trained by Bob Baffert, but now Rodolphe Brisset is the trainer for the son of Uncle Mo. This three-year-old has two wins in four career races, but the wins have featured low speed figures. The optional claiming win back on June 15 at Indiana Grand came on the turf track. He’ll return to dirt here, but faces a big step up in class and doesn’t have the speed figures of other contenders.

2. Country Grammer (7/2) – Country Grammer is a really interesting horse in this field. Early speed is expected to win at Saratoga in the summer meet and Country Grammer has not been a fast starter in his races. He really hasn’t been impressive in his starts. The son of Tonalist won his maiden at Aqueduct in his second try and then went to the Fountain of Youth at Gulfstream Park and finished fifth, nine lengths back. He was third with a good speed figure in his Belmont race on June 4, but was no match at all for Tap It To Win.

3. Modernist (7/2) – It has been an underwhelming 2020 for Modernist. The Bill Mott colt opened his three-year-old season with his maiden win and followed that up with a win in the Risen Star, but we’ve come to find out that field wasn’t all that strong. Off the Risen Star win, he stayed at Fairgrounds and finished third in the Louisiana Derby to Wells Bayou and Ny Traffic, a horse he beat in the previous race.

Modernist was 20 lengths back in the Belmont Stakes and was never really a threat, but he did get bumped at the start and never really recovered. In the Louisiana Derby, he had the 14th post, so he had a long run to the first turn and couldn’t recover after drifting out wide. In a field like this, Modernist has a good chance, but those speed figures aren’t where they should be.

4. Celtic Striker (12/1) – Celtic Striker had a speedball of a performance last time out…in what was literally a two-horse race. He won the Easy Goer at Belmont by 19 lengths, but the second-place finisher basically failed to finish. Other than that race, we haven’t seen much from Celtic Striker. His best speed performance came at Parx in February in an optional cliaiming with a weak field. He only won by 1.5. He is a fast starter, though, and Saratoga’s track bias favors early speed.

His performance against a strong Matt Winn field was pretty subpar, but he was nearly 170/1 to win that race, so not much was expected. Recent workouts have been uninspiring. If he gets out first, we’ll see if he has the speed over 1 1/8 miles. The answer is probably not, but this is a weak field.

Verdict: Underneath if anything

5. Candy Tycoon (5/1) – Todd Pletcher’s Candy Tycoon finished well behind Ete Indien at the Fountain of Youth, but went in with low expectations at 24/1. He was sixth in the Florida Derby at a similar price in a race where Ete Indien finished third. Now Candy Tycoon comes off of more than two months on the shelf in hopes of taking down a Derby points race.

The son of Twirling Candy was a big-ticket item, but has not really lived up to the hype to this point. We’ll see if we get a faster start here. Candy Tycoon started fast in two of his better performances and then morphed into a closer for the last race to finish second to Rushie by 1 1/4.

Verdict: Underneath if anything

6. Mystic Guide (5/2) – This is the horse to watch in this race as far as I’m concerned. The Godolphin-bred Mystic Guide is the son of Ghostzapper and Music Note and has put together two strong speed efforts in his last two races. Losing to Tap It to Win is not something to hang your head about, especially with a career-best speed figure. Tap It to Win nearly set the track record at 1 1/16 miles in that five-length win.

There are only three data points in his young career, but he’s improved in each race. He did lose by five lengths at 1 1/16, but he did close a little after getting off-stride in the middle of the race and the belief is that this horse is bred for distance. We could be sitting on a big run here from trainer Michael Stidham’s horse. The workouts have looked good of late.

7. Caracaro (6/1) – Caracaro has not run since January, a maiden win by six lengths down at Gulfstream Park. Uncle Mo is well-represented as a sire in this race, as his son makes his stakes debut. Two strong speed figures will follow Caracaro to Saratoga. Jockey Emisael Jaramillo will not, so we’ll see if that makes a difference or not.

This will be a big test for Caracaro. The field is stronger. The layoff is over six months. This is the first shipper for the colt. This is also the first distance race, having only gone a mile in that six-length win. The works have been good. The layoff is a big question for trainer Gustavo Delgado, but this is clearly a horse with some great speed potential in a race that doesn’t have a ton of it.

8. Chestertown (10/1) – Steve Asmussen and his reliable rider Ricardo Santana Jr. team up on Chestertown. The son of Tapit has only won once in his six tries, but he does have some more distance experience than others in the field. He also doesn’t have the same speed figures of the others in the field and his works have been pretty weak.

The blinkers will be on, so running in traffic may be less of an issue, but he’s gone off as a favorite in five of six races and has just burned up money. Relying on him looks difficult here.

9. Katzarelli (30/1) – Katzarelli has some of the weakest speed figures in this field for trainer Thomas Amoss. It is actually pretty surprising that he would even be entered in this race, having come up following a fourth at Churchill Downs in an allowance race on June 5. It was a good closing effort for Katzarelli, but a closing style won’t work here without good enough speed at the beginning to stay engaged.

This looks like a pretty competitive race, but it doesn’t seem like any of these horses are going to be big contenders to win a big race late in the year.

The betting options look a little meager here. I’ll look at $3 exacta box of 3 Modernist, 6 Mystic Guide, and 7 Caracaro with a long shot try on Country Grammer at a couple bucks for the win.