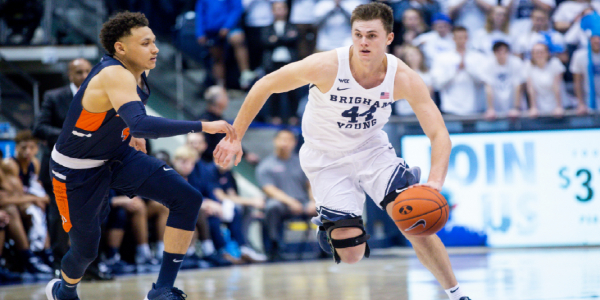 Monday night is the calm before the storm. Conference tournaments are all the rage this week and we’ll have some big ones starting up on Tuesday and especially on Wednesday. That means that we’ll have plenty of hoops and all-day hoops at that with this week’s action.

On Monday, betting options are limited, but we’ve got a few and that includes the West Coast Conference Tournament game between Pepperdine and BYU. BYU is favored by 8.5 with a total of 148.5 at Bovada Sportsbook in this semifinal tilt. Saint Mary’s and Gonzaga square off on the other side of the bracket.

Let’s take a look at this one and see if we can find a play.

BYU is very safely in the NCAA Tournament. Pepperdine is not. The Waves only have one path to the Big Dance and it will be to beat BYU and Gonzaga. The first step is tonight against the Cougars, a team that Pepperdine split with in the regular season. BYU won the first game 65-54 and Pepperdine got revenge a few nights later at home in a 76-73 win.

In that game, Pepperdine was only 3-of-16 from 3, but still managed to have a strong offensive performance. The Waves were 9-of-27 in the win over Santa Clara in their first game of the conference tourney. While three-point shooting is important for a lot of teams, Pepperdine’s most important stat seems to be 3P% against. The Waves rank third in the nation at 27.3% protecting the perimeter.

Against a BYU team that shoots at a high success rate on triple tries, that will be a really important piece of the puzzle for the Waves. Opponents shot 27.7% against the Pepperdine defense during the regular season. We’ll have to see how BYU fares and that could ultimately be the difference in both the side and the total for this matchup.

Pepperdine’s offense would best be described as average. The Waves excelled at the free throw line, but were fifth in 3P% and sixth in 2P% in league games. They did shoot 76% from the charity stripe, so that could provide a lift in this one, both to the side and total.

The Waves went 7-6 in conference play, mostly because the negatives outweighed the positives and that is why Pepperdine is getting an 8.5-point head start tonight.

BYU looks to be an 8 seed going into the NCAA Tournament. A loss here might drop them a spot or two, but it wouldn’t prevent the Cougars from going dancing. BYU doesn’t force turnovers on defense, but that is really the only major area in which the team is lacking. They are solid both offensively and defensively and have the capability to put a scare into a #1 seed if the opportunity is presented.

Overall, BYU ranks 19th in eFG% on offense and 24th in eFG% on defense. The Cougars are 25th in 2P% and 39th in 3P% for the season. They led the WCC in 3P% at just under 40% and shot just shy of 55% on two-point shots. There are a lot of things to like about this offense. The Cougars are very efficient on that side of the ball and the only times the offense has really struggled in conference play came against Gonzaga and Saint Mary’s.

And, surprisingly, Pepperdine. BYU had its worst offensive performance by points per possession (PPP) in the first game against Pepperdine. That one went in the books as a 65-54 win, but BYU’s .931 PPP was their lowest output in any conference game. Adjustments were made, but the Cougars only had 1.004 in the second game.

If you want to point to an area of concern for the Cougars, it would be that. The West Coast Conference is not a strong league overall, but BYU had issues with the top teams in the conference. Because they take great care of the basketball and make a lot of shots, they were able to get by, but we’re also talking about BYU needing to win by nine or more points tonight.

BYU is already in and looks ticketed for a third crack at Gonzaga in the Finals. Pepperdine has one shot, one opportunity. The Waves have no tomorrow. BYU’s season continues regardless. It is worth pointing out how that can be a problem with an underdog in these conference tournaments because teams will foul until the bitter end.

If that happens here, it is what it is. Pepperdine is definitely good enough to hang here, especially with a four-possession head start. BYU has padded its numbers against the weak teams in the conference. The better teams have kept them in check and Pepperdine, despite the 7-6 league record, is clearly one of the better teams.