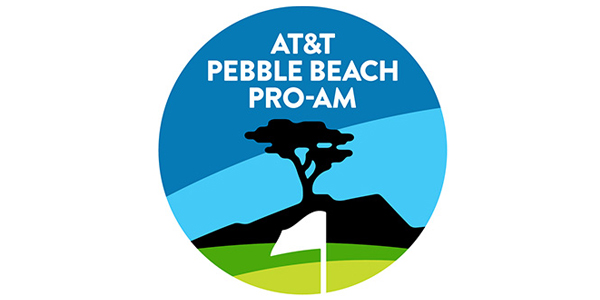 This week the PGA Tour heads to the most picturesque setting all year, Pebble Beach, California for the AT&T Pebble Beach Pro-Am. This unique event will pair 156 professional golfers with amateur players of all skill levels, including celebrities, athletes and CEOs. Those heading to 17-mile drive include last year’s winner Phil Mickelson, fresh off a nice showing in Saudi Arabia, as well as former winners Dustin Johnson, Brandt Snedeker and Jordan Spieth. They are joined by the likes of Patrick Cantlay, Paul Casey, Rafa Cabrera Bello, Matthew Fitzpatrick, Branden Grace, Adam Hadwin, Kevin Kisner, Kevin Na and Viktor Hovland to form a decent field for the formerly referred to Clam Bake. Considering the vast amount of players the event has, it will be split up over three of the most beautiful courses in the world, Pebble Beach, Spyglass Hill and Monterey Peninsula Country Club. Before we break down the course and the field, lets quickly revisit last week’s action

At this point it is hard not to feel for Tony Finau. The guy is unquestionably one of the most talented on Tour but he just cannot seem to find himself in the winner’s circle. He didn’t have his best game on Sunday, but he certainly did enough to win. Webb Simpson hung around, made an insanely clutch putt on 18 to force a playoff and canned another from a similar spot to take hone his 6th Tour victory. You have to think it is just a matter of time until Finau closes one out and I have a feeling once that happens the winning floodgates will open. H2Hs last week were an absolute disaster, going 0-4 including a 2-unit loss on Matt Wolff who missed the cut, still beat Cam Smith (undoubtedly cashing for many readers) but failed to cover the -1.5 strokes. -1.5 giveth, -1.5 taketh away. Alas, onto Pebble!

The AT&T Pro Am is unique in that it is played over 3 different courses, with players rotating between each on Thursday, Friday and Saturday. At that point there is a cut and the remaining 60 and ties head to Pebble Beach to battle it out for the title on Sunday. The 3 courses all offer beautiful views of the California Coast and Pacific Ocean, making it susceptible to winds. Weather is always a factor here and I urge everyone to check the forecast closer to tee off before solidifying any wagers. At this point, it looks like extremely high winds, upwards of 25 MPH gusts, are in store for players on Saturday and Sunday, making those already long Pro-Am rounds even longer. I will say, I do enjoy this tournament because I have spent a decent amount of time on Pebble and MPCC and have recently walked the Pebble prior to the US Open last summer and caddied at MPCC for the Cal Amateur last fall.

The courses play somewhat similar. While we don’t have strokes gained data from past tournaments for MPCC and Spyglass, their length alone can tell us that they are less than driver courses. While the overall difficulty of each course will depend on the wind, they play similar and relatively easy. This makes sense considering you have 125 amateurs included and definitely don’t want things too challenging for double digit handicaps. The fairways are tight, but relatively easy to hit as players will be taking less than driver. Where these courses get tricky is around the greens, especially Pebble. Pebble’s greens in particular are TINY, the smallest on Tour year after year. Once on the greens players will contend with the Poa greens, always a Tour favorite! All jokes aside, Poa greens can be difficult, they run much bumpier than Bent and Bermuda and when combined with the natural undulations that come when playing a coastal course, they can give players fits. This is evidenced by Pebble having one of the lowest inside 10 feet make percentages on Tour.

With all that being said, this week comes down to approach shots, ability to play in the wind and Poa putting. I will be looking at Strokes Gained Approach heavily along with Opportunities Gained (shots within 15 feet of the flag). Par 5 scoring is important across all 3 courses so I will include that as well as Poa and Wind play statistics. Onto the plays!

THE PLAYS
(odds from Bookmaker, 5Dimes, Bovada – shop around!)

Mathew Fitzpatrick +3000 – Readers know my disdain for players who predominately spend their time on the Euro Tour. The mid to lower end of those fields are so bad it is hard for me to take top end results all that seriously. With that said, I find myself on Fitzpatrick this week. The 25-year-old former US Amateur winner has five career European Victories, the same number as everyone’s favorite Tommy Fleetwood, including two Masters events which are relatively star studded for a European event. Since last year’s At&T Pro Am he has 10 tournaments where Shot Link data is available and he has finished 9 of those 10 with positive Strokes Gained Approach which includes gaining 4.2 at Pebble at last year’s US Open. A 2nd place finish last year at Arnie’s event was coupled with a 4th and a 7th at the last two WGC events, the St. Jude and the HSBC shows Fitz can excel in full field events that are played by the best in the world. My thought process is that if Fitzpatrick spent more time on the PGA Tour it wouldn’t be long until he found himself lifting a trophy and in an event that is somewhat deep but lacking the top tier talent, this is a perfect spot for him to shine.

Alex Noren +5000 – Two years ago around this time, Noren was all the rage. He was coming off a head to head dual against Jason Day at Torrey, where he came up just short of a win and that was preceded by some excellent showings in the desert on the Euro Tour. He was living up to the hype all the way until a missed cut at the Masters that year seemed to derail his entire career. The latter half of 2018 and most of 2019 were seasons to forget for Noren, but he started showing signs of turning it around at last year’s British, finishing 11th and gaining over 7 strokes Ball Striking over the four days. At his peak, iron play was the strongest facet of his game and he has begun the 2020 displaying some of that same ability that found him highly touted in 2018. In the Swing Season he came in 15th at the Bermuda and 10th at the RSM. He then he started this calendar year finishing 32nd at the Sony, while gaining almost 6 strokes Ball Striking, and 14th at the American Express two weeks ago gaining nearly 3 strokes in the category. This solid form places him #1 in the field in Strokes Gained Total over the last 24 rounds each competitor has played. It is rare you can get that kind of form at 50/1 and I will gladly count on Noren returning to his 2018 level of play.

Jim Furyk Top 20 +245 – Remember when I said this is a less than driver tournament? Well, it is for everyone but old man Jim as he will absolutely be letting the big dog eat on the Monterey Peninsula. Furyk is undoubtedly one of the shortest players Off the Tee in this field but what he lacks in length he makes up for in iron play, somehow getting that wonky swing to strike it pure time and time again. Since last years ATT Pro Am Furyk has Gained Strokes on Approach in all but one PGA Tour tournament he has played. 18 of 19 tournaments. Incredible. Considering this tournament turns into an iron contest, it is no wonder Old Man Jim finished 14th here last year. What is most intriguing is that Poa is by far his favorite putting surface, and lets just say our sample is plenty large enough considering this guy was playing on Tour during the Bush Sr. Administration. Jimmy at +245 on a course where his lack of distance can’t hurt him is simply a steal.

2u Branden Grace -1.5 (-105) over Graeme McDowell – One unique aspect of this event is that many of the top tier guys making an appearance here were over in Saudi Arabia last week taking giant appearance fee checks. DJ, Phil, Bello and McDowell are included amongst those making the quick turn around to Stateside golf and you will see a theme in the head to heads below fading this travel. McDowell presents an even more unique situation as he secured his what seems like 100th Euro Tour win last weekend with an absolutely gutty performance. While has has been showing excellent form over the early part of the 2019/20 season, McDowell was clearly overcome with emotions following his win and that, coupled with the long travel, leads me to expect McDowell will come into Pebble Beach physically spent. Enter Grace, who showed excellent form on the Euro Tour in the Desert before coming over last weekend and finishing 4th at the WMPO behind almost 4 Strokes Gained on Approach. The former PGA Tour winner is likely to be in contention this weekend, meaning McDowell will have to back up his stellar play on two continents in back to back weeks. Grace has the perfect high floor that I look for when backing a player in a head to head and given McDowell’s situation a missed cut is definitely in play.

That is it for this week’s breakdown! Thank you for reading. Make sure you follow my Twitter @jmazzjd for my full card, usually out Wednesday Morning. Also, I will be adding to my Outright card as the tournament progresses and will post all additions there as well. 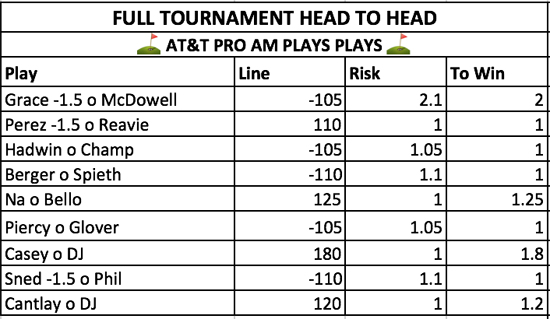