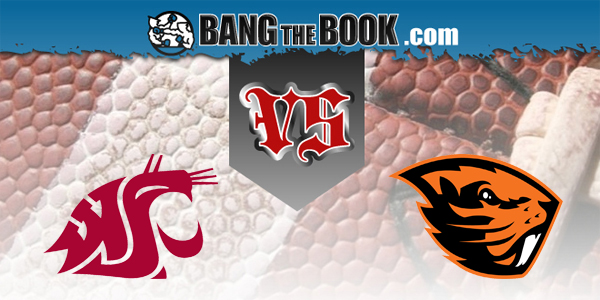 Pac-12 Football Picks — Oregon State-Wazzu: Should We Leave It to the Beavers?

Here is what intrigues about this matchup:

Washington State has said so long to Mike Leach and the Air Raid offense and hello to Nick Rolovich and the Run ‘n Shoot he’s brought over form his previous job at Hawaii. It is a different concept, which would take some getting used to. But of course, the Cougars didn’t have a full spring practice to get things together in that regard.

But Rolovich took a shortcut, or so he believes, regarding his team’s learning curve. He has inserted freshman Jayden De Laura as his starting quarterback. This is a kid who has run the same Run n’ Shoot that Rolovich used, when he starred at Saint Louis High School in Honolulu, winning two state championships. To give you an idea of what level of football they played at, the school has already graduated the likes of Tua Tagovailoa, Marcus Mariota and Timmy Chang, not to mention Jason Gesser, a star at Wazzu.

The move was probably necessary because Leach has a number of one-off quarterbacks at WSU, including Luke Falk, current Jacksonville Jaguar Gardner Minshew and Anthony Gordon, who did thrive in the Air Raid last season, throwing for 5579 yards and 48 touchdowns.

It would probably be too much to look for that kind of production from De Laura. And it does take a lot of guys to get on the same page.

They’re probably buzzing a little around the Oregon State program, because even though last year’s quarterback, Jake Luton, has departed, he will be making his first NFL start for the Jaguars on Sunday, replacing an injured Minshew. The new guy is Tristan Gebbia, who is a redshirt junior. Gebbia brings a certain sense of continuity to the table, because this is now his third season in the offensive system employed by head coach Jonathan Smith.

And while we know that Rolovich’s offense is going to run the ball more than Leach did (jeez, only 22% of plays last year!), and is decently equipped to do so with Max Borghi, Oregon State may have the edge in that area with Jermar Jefferson, who was a sensation in the Pac-12 two years ago as a freshman (1380 yards) and then had a choppy 2019 because of injuries. Now he’s healthier, asserting that he used his lockdown time well by working out like a beast.

What Wazzu will find challenging is a Beaver defense that may have the best linebacker corps in the Pac-12. One of those linebackers, Hamilcar Rashed, will almost certainly be playing on Sundays.

Last year’s meeting was a wild one. Washington State got 606 yards passing from Gordon and even then could only win by a single point (54-53), as OSU bum-rushed them for 193 yards on the ground.

But what is more significant is that Oregon State – and Smith’s staff – got a look at Rolovich’s offense in the second game of last season against Hawaii. So there aren’t going to be any big surprises.

Even with the touted frosh QB, things may take a while to gather momentum in Pullman, as they’ve got to replace three WR’s who accounted for more than 2800 yards. A vote, at this early stage, for continuity and OREGON STATE.

BetAnySports makes every Saturday a special one in college football! With reduced juice you’re going to receive tremendous value, and Sports Betting Prime allows you to place wagers in real time while the game is in progress……. Make deposits with credit or debit cards, person-to-person transfers or the virtual currency of Bitcoin, which is fast and easy with their automated system and NEVER incurs a transaction fee!