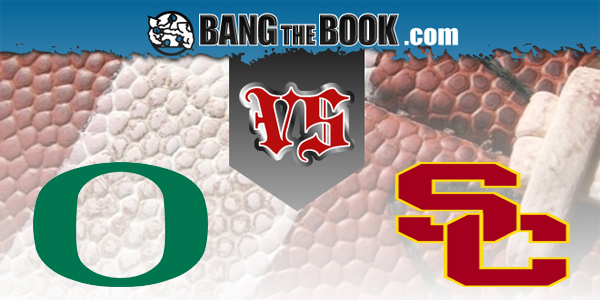 The Oregon Ducks weren’t supposed to be in this week’s Pac-12 Championship Game, but they didn’t even get the chance to be in it. Last week’s game between Oregon and Washington was canceled. With a win, the Ducks would have been the North Division representative against USC.

Washington’s COVID issues forced the game’s postponement and also forced the Huskies out of this opportunity at the Los Angeles Memorial Coliseum on Friday night. Now, it will the Ducks that face the Trojans in the season finale for the Pac-12 in what has been a strange and disappointing season across the conference.

USC is favored by 3 with a total of 64 at BetOnline Sportsbook in this matchup with a de facto home field advantage by virtue of having the game in LA.

We’ll profile the two teams and find a bet for this one.

Oregon only got to play five games and the returns weren’t spectacular. They faced a Stanford team that lost QB Davis Mills to a false positive COVID test in the first game and won by 21, but the box score was closer. Washington State provided a lot of resistance in the second game, but the Ducks pulled away in the second half.

Oregon got fortunate not to face QB Dorian Thompson-Robinson in the three-point win over UCLA, a game in which they were outgained and mostly outplayed, but +3 in turnover margin. The Ducks blew one late against Oregon State in what used to be called the Civil War and then lost 21-17 at Cal in a game where Oregon won the box score comfortably, but finished -2 in turnover margin.

There were a lot of moving parts for the Ducks this season. New starting quarterback Tyler Shough had big shoes to fill replacing Justin Herbert. He played well, but also played like a sophomore starting for the first time at some moments. The Ducks ran the football effectively with 5.3 yards per carry and got some huge plays in the passing game with over 15 yards per reception.

The Oregon defense was supposed to be better, but the Ducks were hurt badly by opt-outs prior to the season. When all was said and done, the Ducks allowed 5.7 yards per play and, more importantly for this particular game, 7.1 yards per pass attempt. That actually ranked 41st in the nation, so the run defense had more issues, but the secondary will be tested here.

The Trojans defense has been a problem area several seasons in a row now, as poor recruiting and poor scheming have held this program back. Oregon was a top-10 offense in yards per play this season with 7.25, so USC has two choices in this game. Figure it out defensively or hope that Kedon Slovis can win an arms race with Oregon.

Putting it on the defense could be futile, as USC allowed 5.74 yards per play on the season, finishing just below Oregon in that department. Putting it on Slovis might be the better option, but USC was 54th in yards per play on offense with 5.8. They won all five of their games and Slovis completed 70.3% of his passes with a 15/4 TD/INT ratio, but the running game was underwhelming again and the USC receivers weren’t as explosive as expected.

You won’t find many people in the sports investment community that sing the praises of Clay Helton either. If you do, it is a contrarian opinion to the extreme. The fact of the matter is that USC hasn’t maximized the talent it has gotten and hasn’t gotten enough talent to the university.

It is worth noting in a game with a high-scoring expectation that USC only allowed 12 red zone trips in five games and Oregon allowed 21. USC was a better red zone defense from a TD% standpoint as well. That could be something that keeps this game close and allows USC to get a bit of an edge.

On the other hand, Oregon’s offense was far more potent in the red zone compared to USC’s offense, so that may be the equalizer there.

While the personnel isn’t quite the same for Oregon, you have to respect what they did in last year’s Pac-12 Championship Game. A Utah team with everything to gain trailed the Ducks 20-0 at halftime of last year’s title game. Oregon scored the game’s final 14 points in the fourth quarter to salt away a 37-15 win that could have kept the Utes out of the College Football Playoff had they gotten some help in the other games.

With that in mind and with Oregon’s second wind off of an impromptu bye week here, the Ducks +3 are the play and a money line sprinkle isn’t a bad idea either.