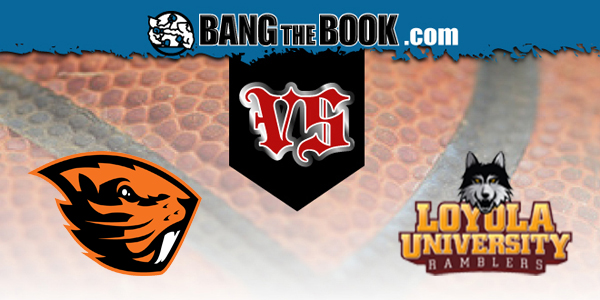 Getting hot at the right time can take you a long way in college basketball. Staying hot is the trick. The Oregon State Beavers have to hope that a five-day break doesn’t wind up being a cool-down period. Wins in five in a row and eight of nine have this dangerous #12 seed matched up with the #8 Loyola Chicago Ramblers in a Sweet 16 matchup that few people saw coming.

Loyola Chicago’s path to get here went through top-seeded Illinois, a team that many people felt was good enough to make the Final Four or maybe even win the NCAA Tournament. The Ramblers had other ideas with a 71-58 win to advance to the Sweet 16 for the second time in three NCAA Tournaments.

These lines have been up all week with plenty of time to marinate and Bovada Sportsbook is showing Loyola Chicago -6.5 with a total of 125.5.

Oregon State was a middling team in what was thought to be a good, but not great, Pac-12 Conference. Through 16 conference games and 22 total games, the Beavers were 11-11 with a 7-9 record in league play. Then something happened. A 59-57 win over California seems like an odd catalyst, but Oregon State won that game without making a single three-point shot.

In the eight games since, seven of them wins, the Beavers are shooting north of 40% from three, including 16-of-41 here in the NCAA Tournament in wins over Tennessee and Oklahoma State. It isn’t all unicorns and rainbows for the Beavers, though. Many believe that the game against the Cowboys should not only have been closer, but could very well have gone in the other direction.

Oklahoma State was 10-of-36 on two-point shots, including a 5-of-16 mark at the rim. Given that Oregon State ranks 236th in 2P% defense at 51.2%, it is easy to see why observers would think that. Oregon State doesn’t really stand out in any way from a full-season standpoint, but is in the top 20 in adjusted offensive efficiency over the last 10 games and the top 60 in adjusted defensive efficiency.

As always, though, we have to wonder if something just clicked. Wayne Tinkle is a solid head coach. So what if the Beavers don’t have great numbers for the full season. They have great numbers now and current form is a major factor in March.

If current form is a major factor, well, the Loyola Chicago Ramblers look to be on another level. It wasn’t like the Ramblers squeaked by Illinois. No. Not even close. Loyola Chicago held Illinois to .875 points per possession. The Illini had been held under a point per possession just twice otherwise this season. That was against Purdue and in a weird home game against Maryland.

The .875 points per possession were easily the worst for the Illini. That was the job that Porter Moser’s team did defensively. Oh, yeah, and the Ramblers also had 1.071 PPP against Illinois. The game was played to 66 possessions, which tied for the third-slowest game of the season for the Illini. A Missouri Valley Conference team dictated the pace and flow of a game against the Big Ten Tournament champs and a #1 seed.

Had Loyola Chicago played immediately after beating Big Brother, it might have been a tougher spot. Playing five days later should help the team come back to earth a little bit and prepare for this game. I think it’s actually a positive to have a little layoff here, whereas I think it is a negative for Oregon State.

The Ramblers are ninth nationally in eFG% offense. They are fourth in 2P% offense against an Oregon State defense that struggles to defend in the paint. There really are a lot of things pointing in Loyola’s favor here.

My biggest question about this game has to do with the spread relative to the total. This is effectively a three-possession spread in a game that will be low on possessions and probably low on points. The total is in the mid-120s, which is actually fairly high for a Loyola game given some of their other scores this season.

Still, I don’t see Oregon State stacking up from an efficiency standpoint in a game where Loyola dictates the tempo. The layoff for the Beavers hurts their momentum, which is an intangible concept, but teams that are riding a high want to keep playing. You could say the same for Loyola, but I believe a few days to process beating Illinois is a good thing before getting back to work.

Give me the Ramblers here.