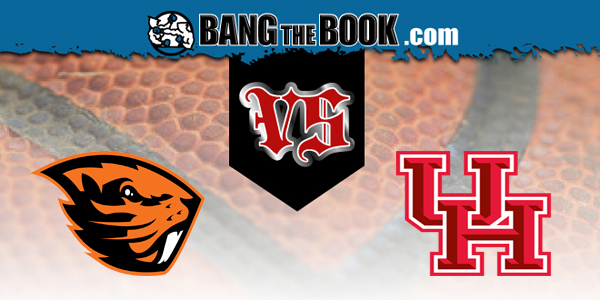 The magical run for Oregon State did not end in the Sweet 16 as many predicted. One could say it is ironic that the clock has not yet struck midnight for the #12 seed Beavers. We’ll see on Monday if the season comes to an end against the Houston Cougars.

Houston is -8 with a total of 130 at Bovada Sportsbook for this Elite Eight matchup on March 29. The Cougars are favored by more than they were against Syracuse, which may come as a shock to some, given that Oregon State just knocked off the team that upset Illinois to send the #1 seed Fighting Illini packing.

Let’s dig into the matchup and see if we can find a pick on the game.

Al Davis got famous for saying “Just win, baby”. The Beavers seem to be following that mantra. Oregon State’s run of success in the NCAA Tournament has not been pretty. A case of not asking how, but asking how many, so to speak. Per the ShotQuality.com on Twitter, Oregon State had a less than 1% chance of making it to this point based on the quality of shots they had and the shot quality of their opponents.

To take it one step further, in the win over Loyola Chicago, the expected score by Shot Quality should have been 76-59 in favor of the Ramblers. Oklahoma State also missed a bunch of good looks in the second round. Tennessee also should have been victorious. Opponents have only shot 22.8% from three in this tournament against the Beavers. In fairness, 3P% defense has been the best attribute for Oregon State all season long at 30.4%, but they’ve taken it to another level in this tourney.

Based on the Shot Quality of the game against Loyola Chicago, the Ramblers would have been 92% to win. But, here’s the thing. The Ramblers didn’t win. Oregon State won. And the Beavers just keep winning. Six in a row to be exact and nine of the last 10. Defensively, Oregon State has allowed .839, .894, and .959 points per possession in this tournament.

We can poke holes in the defense and in the missed opportunities for the teams the Beavers have beaten, but this offense has also been substantially better in the latter portion of the season. Oregon State has 1.049, 1.021, and 1.075 PPP in the three NCAA Tournament games, which isn’t necessarily great, but the Beavs have scored at least a point per possession in 10 straight games.

Luck plays a factor in every game. The Beavers are running good in that department, but this is also a team playing very well right now with an extreme sense of belief.

A lot of smart people expected Houston to beat Syracuse and win comfortably in the Sweet 16. I’m not sure I’d put myself in that group, but the Cougars were my favorite side of the Sweet 16. The Orange were due for enormous regression from the floor and only scored 46 points over 64 possessions with a 14-of-50 performance from the field. It was the lockdown type of defense that we’ve seen all season long from Houston. The Orange managed just .720 PPP and Cleveland State and Rutgers were also held well under a point per possession.

Houston leads the NCAA in eFG% defense and cracked the top 10 in 3P% defense with that win. They were already in the top 10 in 2P% defense and now reside in the top five. Frankly, the game shouldn’t have even been that close. Houston only managed 11 offensive rebounds, which was lower than the expected number against Syracuse’s zone defense and poor rebounding numbers. The Cougars left points on the floor.

The concern here with a big number is that Houston is not an efficient offensive team. While the Cougars take good care of the basketball and get those extra possessions from offensive rebounds, Houston is outside the top 100 in 3P% and outside the top 160 in 2P%. Houston sits just narrowly inside the top 125 in eFG%. Cleveland State was no match for Houston’s length and athleticism, but the Cougars only scored 63 against Rutgers and 62 against Syracuse.

Unless the Cougars can really hold down Oregon State’s offense in a major way, covering a big number will be a bit of a challenge. That being said, Oregon State ranks outside the top 275 in 2P% and has to live on the three-ball. Houston’s defense presents major matchup problems in that way.

I don’t think there should be any concerns about whether or not Houston wins this game. The bigger question is whether or not the Cougars cover a spread of eight points. This is a game that should be played low and slow. Oregon State is just inside the bottom 50 in tempo and Houston is well inside of it. That makes this one a pretty tough handicap from a side standpoint.

I’ll look under 130 here. Neither offense is all that efficient. Oregon State has shot better of late, but none of the Pac-12 teams or two of the three teams that they’ve faced in the NCAA Tournament have a defense on par with Houston’s. Loyola Chicago is the closest and Oregon State was 21-of-51 from the floor in a game played to 60 possessions.