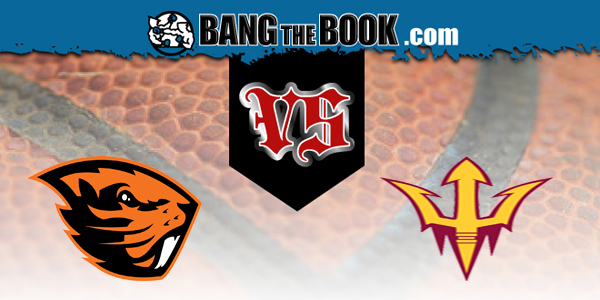 No one knows what is going to happen when Selection Sunday comes around, but you can be certain that two of the teams that would have to play themselves into the NCAA tournament field are the Oregon State Beavers and the Arizona State Sun Devils.

But there are other postseason tournaments as well, so there’s always an opportunity for either of these squads to qualify.

They will clash on Sunday night at 7 p.m. Eastern time at the Desert Financial Arena in Tempe.

And remember that with BetAnySports, you can get reduced juice on this number, along with the opportunity to place wagers in real time once the game has started.

Arizona State has lost non-conference games to Villanova, San Diego State, it also suffered Pac-12 losses to USC, UCLA and Arizona. Bobby Hurley’s team posted its best win of the season over Stanford. But they followed that up after some COVID delays twelve days later, losing a 75 – 64 decision to Oregon.

Oregon State scored a victory over those same Ducks, and it came on the road. They were embarrassed last Monday against nationally ranked Colorado 78 – 49, shooting just 32% and committing 20 turnovers in the process. And then failed to rebound – literally – against Arizona, being out-boarded by 13 in losing by a 70 – 61 margin.

OSU won the previous meeting in a thriller at Corvallis. Arizona State did all it could, shooting 50% from the field and committing only four turnovers, but Oregon State got to the line 27 times. And that is one of the themes we’ll be exploring here.

The Beavers are not an especially good shooting team; in fact, it’s kind of abnormal to hit only 44% of your attempts from inside the three-point arc. But that’s where they are.

Arizona State takes good care of a ball, ranking 15th in the category of defensive turnover percentage. They are a rather weak rebounding team, however, and that’s the kind of thing that creates an opening for Oregon State, which is one of the 20 “tallest” teams in America.

The Sun Devils foul a LOT in fact, almost 24% of the points that are scored by their opponents come from free throws.

In that particular way, it becomes something of an ideal matchup for Oregon State, which scores 22% of its own points at the free-throw line. That is a pretty high figure. and they’re accurate from the charity stripe, hitting 75.7% from there.

What’s the Beavers have to do is avoid making silly mistakes when they have the ball, as Arizona State likes to fuel its offense with turnovers forced on the defensive end. What we mean is that the same kind of slippery-handed performance they had against Colorado won’t do.

As we said, there are a lack of shooters on the Oregon State squad, but it’s critical in this game that Jarod Lucas, their 6 – 3 guard, who had 18 points in the previous meeting against Arizona State, is able to stretch the defense a little. He has hit 41 triples on the season (and is 41% from the arc)

All in all, we do kind of like the fact that Oregon State is able to coax ASU into putting them on the free throw line. Those conversions will work for us, as we grabbed the points in this Pac-12 matchup.