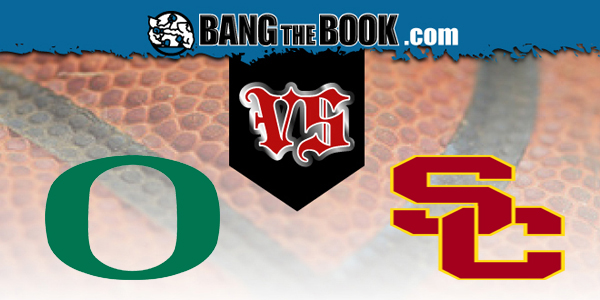 Xavier was a lucky cover on Sunday to give us a 4-3 week in the swing game, so we’ll take them wherever we can get them and then transition into the next week. Monday’s card is fairly light on games, but there is always something to bet on. One of those somethings on February 22 is the matchup between the Oregon Ducks and USC Trojans.

USC is -4 with a total of 138 according to the fine folks over at BetOnline Sportsbook. This line did briefly touch 3.5 on the overnights, but sits 4 pretty much market-wide at this point in time.

BangTheBook Radio is now ATS Radio, but the same familiar voices can be heard, including that of college basketball expert handicapper Kyle Hunter. On last week’s show, the guys talked about how Dana Altman was the best coach in college basketball from Game 18 through the end of the season. This is Game #19 for the Ducks, who did fail to cover against Utah on Saturday, but came away with the victory.

It wasn’t pretty in the back-and-forth game, but we can see elements of Oregon gelling more than we’ve seen at other parts of the season. The Ducks have had some COVID-related pauses. Players have missed games. Will Richardson just came back on February 4. Altman has had to figure things out on the fly and make some adjustments on a regular basis and everything seems to be normalizing.

It will be interesting to see how this game plays out because the Ducks have played three very slow games in a row. USC isn’t a fast-paced team by any means, but certainly faster than the pace that Oregon has played at recently. Oregon struggled offensively against Colorado with just .893 points per possession, but they’ve done well otherwise of late. They lead the Pac-12 in TO%, so that gives a good offense some additional opportunities.

The Ducks are playing a third game in five days, so we’ll have to see what kind of legs they have. This could be a bit of a sluggish game with two quality defensive teams.

The Trojans rank sixth nationally in eFG% defense. They’re also one of the country’s top teams in terms of 2P% defense at 42.4%. USC leads the Pac-12 in both of those categories. They are also second in 3P% defense against at 31.5% in their 15 league games. Andy Enfield’s team has ridden that defense to a 12-3 record in Pac-12 play.

The Trojans are also second in eFG% offense and lead the conference in ORB%. This is a team that does all of the little things well except for one. USC is 12th in the conference in free throw percentage at 66.7%. For a team that gets to the line a lot because of its interior presence and offensive rebounding prowess, they are simply leaving way too many points at the charity stripe.

That was a problem in the loss to Arizona. USC was just 13-of-22 at the stripe and went down 81-72. Perfection would have been a tall ask, but making more free throws certainly could have changed the game. USC also lost on the glass in that game, which is something that we haven’t seen much from them in league play.

What was concerning for USC is that Arizona got inside and got a lot of quality looks at the rim. The Wildcats were just 14-of-27 at the rim and still won the game by nine. It was the first competitive game in a while when USC failed to protect the rim. Oregon has a pretty high rim and three rate, so they’ll be looking to go inside and also fire from outside.

It is very hard to argue with how good Dana Altman is in late February and in the month of March. His team should be very much ready for this matchup. Andy Enfield has proven to be a solid coach as well. Both of these teams are very solid on the defensive end of the floor.

The total seems a bit high given the recent paces for Oregon. USC has played a couple of high-scoring games lately with reasonable possession numbers and that may have inflated the total a little bit on this one. The games were played to 68 and 70 possessions, but landed on 160 points and 153 points. I’m not expecting that in this game.