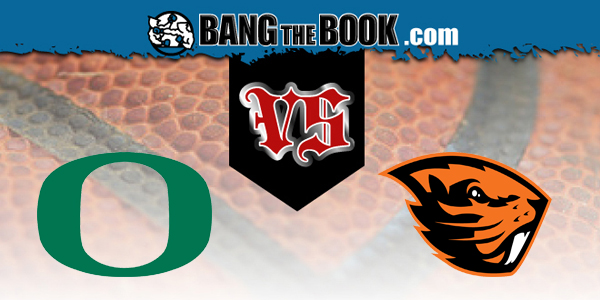 We had a decent number with some closing line value on Texas State, but the Bobcats fell in overtime to drop our record to 4-2 for this week’s spotlight plays. We’ve got one left to go and hopefully we can make it a good one and end the week on a positive note going into all of the major conference tournaments next week.

There aren’t a lot of late games tonight, but we’ve got a few different options, one of them being the Pac-12 matchup between in-state rivals Oregon and Oregon State. The Ducks are -5.5 at MyBookie Sportsbook with a total of 136.5.

The regular season finale for Oregon comes in a road revenge spot. One of four Pac-12 losses for the Ducks came in the first meeting between these two teams back on January 23. Oregon State won 75-64. That Oregon team is not the Oregon team that will take the floor tonight. Chris Duarte and LJ Figueroa were absent for the first game and it was the last one that the Ducks played without Will Richardson.

The Ducks lost Richardson’s first game back to Washington State, but are 9-1 over their last 10 games with him in the lineup. Oregon certainly seems to be rounding into form quite well, as Dana Altman teams typically do going into March. The lone loss on the ledger in the last 10 games was a 72-58 loss at USC when the Ducks struggled mightily from the floor and USC was 27-of-55 from the floor.

You can see the respect that Oregon is getting with everybody in the lineup and as a result of their recent play. The Ducks are growing as a favorite in this game as some early money has hit the board on them. While Oregon’s recent run has been impressive, they have fallen on the right side of some close games with a two-point win at Arizona, a four-point win at home to Colorado, and three-point wins over Utah and Stanford. The Ducks are 6-1 in games decided by six or fewer points and rank highly in KenPom’s Luck Factor metric and also Bart Torvik’s F.U.N. metric.

You could also argue that Oregon has just made its own breaks. The Ducks are first in Pac-12 play in TO% on defense and second in TO% on offense, so they’ve had extra possessions to play with in a lot of their games. They are also shooting threes at a 37.9% clip over their 17 league games.

The Beavers will need a miracle run in Las Vegas to make the NCAA Tournament. Oregon State is putting together a nice finish to the regular season with wins in three straight and four of the last five. The Beavers are 14-11 on the year and 10-9 in Pac-12 play. This is almost always a competitive program in Corvallis. The Beavers haven’t made the NCAA Tournament since 2016, but they’ve been respectable most years.

The big story this season is that Oregon State’s offense has cratered. The Beavers were 86th in eFG% offense last season and 42nd in adjusted offensive efficiency. This season, they are 283rd in eFG% offense. Their run of three straight seasons shooting 53% or better on two-point shots will come to an end. This year’s 46% clip is even worse than the 2017 season when Oregon State was 5-27 and won just one of 18 conference games.

One thing that is really interesting about Oregon State is that they’ve played at a snail’s pace of late. Their last four games have been played to 64, 63, 59, and 63 possessions. Their most recent game against Utah was played to 64 possessions on Wednesday, a big contrast to the February 18 game that was played to 70 possessions.

This is a pretty big total for a couple of slow-paced teams. The first game between the two was played to 67 possessions, but I’d be surprised if this one gets that high. Oregon State has slowed down of late and Oregon has as well. The Ducks played their first four Pac-12 games to 70+ possessions. They’ve only done that twice since and haven’t topped 65 possessions in the last six games.