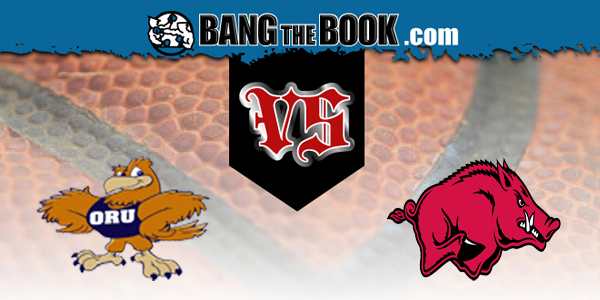 The Oral Roberts Golden Eagles survived the first weekend with close wins over the Ohio State Buckeyes and Florida Gators. Will they be able to outlast the Arkansas Razorbacks to be in the Elite Eight?

Does the road stop here? It very well could. Arkansas is favored by 11 with a total of 158.5 at MyBookie Sportsbook. The Razorbacks are a bigger favorite than what Florida was, but a smaller favorite than Ohio State back in the first round.

Let’s take a look at how the teams match up here.

How the Golden Eagles plan for that will be important. Perhaps the most important factor this time around is Max Abmas. The leading scorer in Division I this season played 3 minutes, but couldn’t be himself because of foul trouble. He missed a long stretch of the game and wound up with four fouls total. He only took 11 shots in the game and only had 11 points. For a player that scored 25.6 points per game, that Arkansas data point represents his lowest-scoring game of the season.

A lot of people will place a lot of emphasis in that game. Frankly, I already have as well. It is worth pointing out that the two teams are very different since that game played more than three months ago. The Golden Eagles have won seven games in a row. They went 10-5 in Summit League play. They’ve even been a bit better on defense late in the season. Also, keep in mind, that line was 19.5. This line is much shorter than that, so we can see the respect that Oral Roberts has garnered.

Scoring 76 points in Abmas’s worst game of the season is a pretty big accomplishment. Abmas has scored 55 points in two NCAA Tournament games. It has actually been Kevin Obanor that has been the bigger factor. He had 28 points and 11 boards against Florida and had 30 points and 11 boards against Ohio State. This does seem like a game where Arkansas can have more success neutralizing him and his height and range.

Of course, if ORU keeps outscoring teams badly from beyond the arc, you never know. The Golden Eagles have made 21 threes to just 12 for opponents to this point.

Arkansas has been a second-half team all season long. That was especially true of the win over Colgate in the first round with an 85-68 victory that felt too close for comfort. The Razorbacks overcame a three-point deficit in the win over Texas Tech. The Red Raiders were 10-of-20 from beyond the arc and the Hogs were just 4-of-17, but still found a way to survive and advance. If Oral Roberts does the same, then this game will probably be too close for comfort.

The Razorbacks don’t really stand out in many statistical categories. The full profile on defense and the strength of schedule lead to a borderline top-10 defense, but Arkansas is 150th in 3P% defense. The Razorbacks do protect the rim very well and that is the big area of strength for this team on that end of the floor. Arkansas is 37th in 2P% defense at 45.9%. That seems to be the separator, but Oral Roberts is perfect content bombing away from three. The Golden Eagles took 29 threes in the first meeting.

This game is really a question of efficiency, like most games. Oral Roberts can score by threes, while Arkansas prefers to score by twos. If the Golden Eagles shoot those threes well and can get to the line a little bit with the nation’s #1 FT%, this will be a game. If Oral Roberts does not shoot well from three, Arkansas’s interior offense and defense will rule the day.

It makes for something of a high-variance handicap. I hate to go back to this, but Oral Roberts gave up 87 points in the first meeting, had a season low from Abmas, and the game wound up around this number for a final score. Can the Golden Eagles keep this one as close?

In terms of leaning one way or the other, it would be a lean towards ORU getting an 11-point head start. Arkansas’s length and strength are going to be problematic for Oral Roberts, but the three-point shot is the great equalizer. The one concern is a lack of depth for Oral Roberts if Abmas or Obanor find foul trouble.

With that in mind, I’ll look at the under here. I don’t think Arkansas, in spite of their tempo, wants to get into a shootout with ORU. The first game was played to 81 possessions. I don’t see that again here.