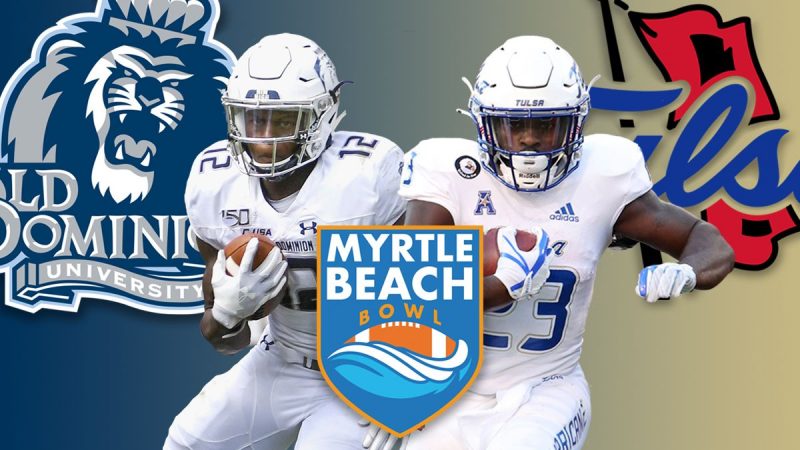 The college football Bowl season betting action goes on Monday, December 20, 2021, with one game around college football, including this Myrtle Beach Bowl showdown at the Brooks Stadium in Myrtle Beach, South Carolina, so we bring you the bestOld Dominion vs. Tulsa betting pick along with the latest odds update on Bookmaker Sportsbook.

Both teams enter at 6-6. These teams have not faced each other in the recent past. Tulsa is favored at 9.0 points with the total set at 53.0. Old Dominion has no injuries, but the Golden Hurricanes have three wide receivers out, including Sam Crawford, Josh Stewart, and Keylon Stokes.

Old Dominion found themselves at 1-5 and looking like it was time to start talking about next year. However, five straight victories helped this team reach a bowl game. The Monarchs went 5-0 ATS over their last five games and 9-3 ATS this season.

The five victories were highlighted by an improved defense that allowed an average of 24.2 points per contest. That included holding three teams to under 20 points in the final five games. The Monarchs finished 80th overall in points allowed per game at 27.6 while averaging 28.5 points per game, 68th overall.

The player for Old Dominion to watch is running back Blake Watson. Watson rushed for 1035 yards and seven touchdowns, averaging 5.1 yards per carry. He missed two contests, but still finished averaging 103.5 yards per game. On defense, Jordan Young led the team with 93 tackles, plus he had an interception and a fumble recovery.

Tulsa also finished the season on a high note, winning their last three games. In fact, the team put up an impressive performance against No. 2 rank Cincinnati, losing by just eight points. The Golden Hurricanes went 4-0 ATS over their final four games and were 7-5 ATS in 2021.

The Golden Hurricanes have Davis Brin under center, and his performance will be the key to this contest. While throwing for 2984 yards, that resulted in just 16 touchdowns and he threw 16 interceptions. He completed just 58.9% of his passes. Josh Johnson had 75 catches for 985 yards and five scores.

This should be an outstanding game, and the key is going to be how well that Brin is able to move the ball. Clearly, the Monarchs want to run the ball, so expect them to establish the ground game. The Golden Hurricanes allowed 148.6 rushing yards per game, so Old Dominion should have some success.

However, a key stat to watch is that the Old Dominion defense generated just 24 sacks and seven interceptions. That should mean that Brin will have some time and should have success throwing the ball. Definitely the Golden Hurricanes come away with a victory.

This is going to be a close call. These teams averaged a combined total of almost 55 points per game while allowing right at 55 points per contest. This would seem to make the over the smart pick. However, the play of the Old Dominion defense over the final five games of the season coupled with the fact that Tulsa held opponents to 20 points or less in three of their last five games gives the impression that this is going to be a lower scoring affair than many believe.