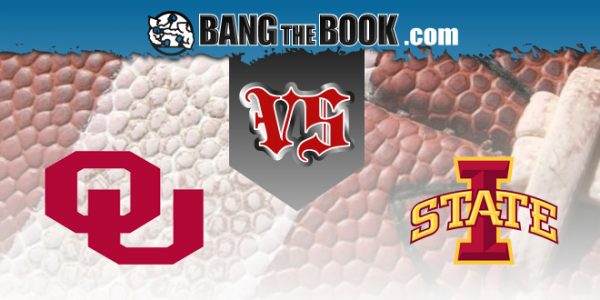 There is some serious blowout potential in some of the Power Five Conference Championship Games on Saturday. This one doesn’t project to be one of them, but you never know.

The Oklahoma Sooners would’ve been happy to see anybody but the Iowa State Cyclones in Arlington. Iowa State has covered five straight, including two outright upsets over the Sooners. One of those upsets came earlier this season when Iowa State won 37-30 in Ames.

We’ll see what the Big 12 Championship Game brings on December 19, but all indications are that it should bring us a pretty good game. BetOnline Sportsbook has Oklahoma -5.5 with a total of 58.

Let’s profile both sides and see if we can find a play for this matchup.

The Sooners really turned a corner about their Red River Rivalry game against Texas. From that point forward, Oklahoma won five in a row, all by 13 or more points. The Sooners averaged 45 points per game and only allowed 15.6 points per contest in wins over TCU, Texas Tech, Kansas, Oklahoma State, and Baylor.

It sure feels like Lincoln Riley’s team hit a good stride after the bye week and Spencer Rattler settled back in and stopped turning the ball over. In fairness, Oklahoma did wind up at least a touchdown favorite in all five games and the Big 12 wasn’t great this season, but all you can do is play the teams on the schedule and Oklahoma took care of their affairs to get into this game despite two early Big 12 losses.

During that five-game winning streak, Rattler posted an 11/2 TD/INT ratio and completed almost 66% of his passes. Even though it felt like a down year for Oklahoma’s offense in some respects, the Sooners still finished with 6.71 yards per play. The defense actually wound up 19th in the nation with 4.93 yards per play allowed. They created some takeaways and short fields that allowed the Sooners to put up some eye-popping offensive scores.

Oklahoma wound up with 51 red zone appearances in nine games. Opponents only had 30. The Sooners also got off the field a lot on third down, holding opponents to 27.3% on their third down attempts. The best way to help out a potent offense is to give that unit more opportunities and the Sooners did a great job of that this season. It was a huge year for Alex Grinch, who struggled with last year’s defense, but he turned things around this season.

Alright, let’s get the obvious out of the way first. Matt Campbell as an underdog at Iowa State is 20-8-2 against the spread, including a mark of 14-5-1 as a dog of four or more points. This is a team that has cashed a ton for bettors in this type of role, including those five consecutive covers against Oklahoma, all in a bigger underdog role than this one.

It’s fair to wonder if this is a sell high point on Iowa State given that their previous lines against Oklahoma were 20, 29, 17.5, 14, and 7, which came on the heels of Oklahoma’s loss as a 28-point favorite against Kansas State. Had Oklahoma taken care of business there, that line would have probably been double digits as well.

Brock Purdy had a solid regular season with a 17/6 TD/INT ratio and a 66.2% completion percentage. Make no mistake, though, this Cyclones offense runs through Breece Hall, who has 1,357 rushing yards going into this one. His 17 rushing touchdowns rank fourth nationally and his 222 attempts are second to UTSA’s Sincere McCormick. He’s the bell cow for this offense and he’ll be relied upon a lot.

In the first game, the four scoring drives in the 24-point fourth quarter were 41, 39, 13, and 55 yards. Special teams and turnovers inflated the score of the game. It was a 23-20 contest going into the fourth quarter. I can’t help but feel like the under is the right side in this game.

Similarly, I can’t help but feel like Oklahoma is the right side. Iowa State seems to match up well with the Sooners, but this Oklahoma defense got very strong in the second half of the season. They even finished the year with better numbers than the Iowa State defense. As long as Rattler takes care of the football, the Sooners can play their own version of keep away and they did a decent job holding Iowa State to 4.4 yards per carry in the first meeting.