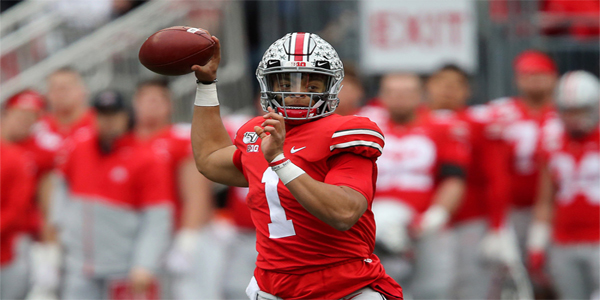 The National Championship will be contested on Monday night at Hard Rock Stadium in Miami Gardens (8 PM ET start), between the Ohio State Buckeyes and Alabama Crimson Tide.

And you should be aware that BetAnySports has plenty of props to wager on for the game. One of them involves the total passing yards for Justin Fields, the Ohio State quarterback:

Certainly if you watched last week’s semi-final you could attest that the Buckeyes looked awesome, and blew by Clemson like the Tigers were standing still. But what about the after-effects of all that?

Fields has to be affected, at least a little. He took a big shot to the ribs in that contest. That was a clean shot – not clean, in terms of the rules, apparently, as linebacker James Skalski was nailed for targeting – but unobstructed. And those things tend to linger.

Head coach Ryan Day wouldn’t go into it in much detail. And frankly, who would want to reveal a whole lot of injury information to an opponent? (keeping in mind that college teams are not under strict requirements to do so)?

“Justin’s had a good week of practice,” Day said.

Fields himself seemed a little more forthcoming. About the team trainers and the treatment he received, he said, “I wasn’t … hesitant on taking anything that they would give me. But I was just trying to do whatever I could do to get back on the field.”

He adds that “I’ll be good to go come Monday night.”

Against Clemson, Fields threw for 385 yards on 28 attempts (13.8 yards per attempt) and also ran for 42 yards. For the season he completed 73% of his passes for 9.9 yards per attempt. And he had 21 TD passes in his 192 throws. For his career, which includes limited action as a freshman at Georgia, he’s got 66 TD’s with nine interceptions. It should be noted that he threw twice as many INT’s this year (six) than last (three).

I don’t doubt that he’ll be able to play, and probably play pretty well. HOW well, however, is the subject of this prop.

* It is widely known that Ohio State was possibly interested in having this game pushed back a little because of its COVID-19 issues. The rumor was that they were also trying to buy Fields some time to heal from his rib injury.

* I would be a little concerned about what could happen if he took a hit in the wrong place. Could he miss some time, or be taken out of the game completely?

* The number being posted is higher than Fields’ average on the season. He has thrown for 272 yards a game.

Now, I don’t have any illusions about Alabama having one of its strongest defensive units during Nick Saban’s tenure. They’ve been burned, for sure. But they do have a shutdown cornerback in Patrick Surtain Jr., and Ohio State does not have a plethora of outside receivers.After Chris Olave (42 catches) and Garrett Wilson (40), the next guy has just twelve. And the Buckeyes have a hot running back in Trey Sermon (524 yards in last two games) who they are going to feed.

So I find myself in a strange situation. Even though I believe Ohio State should score some points (and Urban Meyer says it, so it must be true, right?), I still think the value in this prop is on the UNDER.

Find all the props you’re looking for at BetAnySports, where you can also get reduced juice in betting the side and total. And after the game begins, you have more of an opportunity to play, with Sports Betting Prime……. Open up your account in time for the game – use a debit card, credit card, person-to-person transfer or the virtual currency of Bitcoin, where there is NO transaction fee!