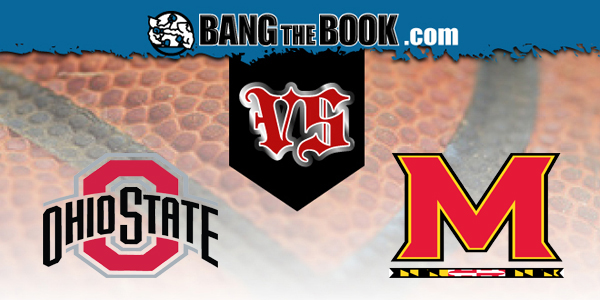 The Monday after the Super Bowl sort of feels like going back to work the day after a holiday. It is just one of those days where the hump is a little bit taller and the climb is a little more taxing. Fortunately, those that had a rough Super Bowl or those that prefer college basketball have a full slate of games to examine.

Spotlight games are hardly plentiful on Monday, but we’ve got a good one in the 9 p.m. ET timeslot from College Park, where the Maryland Terrapins host the Ohio State Buckeyes. The Buckeyes are -3.5 with a total of 139.5 at Bookmaker Sportsbook on the overnight lines, as we’re getting this one out a little earlier to you.

The Buckeyes are coming off of a big, emotional win over Iowa on Thursday night that vaulted them well up into the top 10 on most college basketball ranking sites. Chris Holtmann has done a phenomenal job with this Buckeyes bunch. They’ve had some injury issues and players in and out of the lineup, but they’ve been able to persevere and really have exceeded a lot of preseason expectations.

Per Bart Torvik, Ohio State now owns eight Quadrant-1 wins and six Quadrant-1A wins, including that victory in Iowa City a few days ago. The Buckeyes have one huge weakness and it’s that they don’t force turnovers. They only had six takeaways in the win over Iowa, but scored 89 points to pull the upset over the Hawkeyes. Their 1.271 points per possession were a season-high in Big Ten play, so we could see a little bit of regression here against the Terps.

The Buckeyes now rank in the top five in adjusted offensive efficiency. They take great care of the basketball, get to the line a lot, make their free throws, and make a lot of two-point shots. They are 66th in the country at 52.9% on those attempts. They are actually shooting 53.9% in league play. Many, myself included, have been looking for some regression from Ohio State, though.

They’re shooting just shy of 48% on “Far Twos” as defined by Torvik. Mid-range jump shots are typically low-percentage opportunities, but the Buckeyes have proven to be a pretty quality jump-shooting team all the way around, including a 35% mark from three-point range.

Maryland really does not. Donta Scott and Eric Ayala have to do a lot of the heavy lifting for Maryland. Aaron Wiggins has taken the most shots, but he’s only shooting 46.2% on two-pointers and 29.3% on three-pointers. It can be frustrating when less efficient players take more shots than those that are having success and that has been the case offensively for Maryland this season. Wiggins is not a bad player by any means, but he’s got the highest usage rate on the team and probably shouldn’t.

We’ve seen Maryland’s offense struggle a lot in recent games. They just scored 50 points on the road in a loss at Penn State. They scored 61 points in a nail-biting win over Purdue on February 2. They had 55 in a loss to Wisconsin and 63 in a win over Minnesota prior to that. This team just doesn’t score a lot of buckets. The Terps don’t shoot all that poorly overall as a team, but played an extremely weak non-conference schedule.

In conference play, Maryland is only shooting 48% on twos, 33.1% on threes, and just 66% from the free throw line. They are one of the worst offensive rebounding teams in the conference. Life in the offensive halfcourt just isn’t any fun for Mark Turgeon’s team, which is why the Terps are just 4-8 in conference action. To be fair, the Big Ten is an outstanding basketball conference.

Maryland hasn’t even played that well defensively in conference play. They don’t really stand out in any way and rank in the middle of the conference in a lot of the statistical categories. That doesn’t seem to be good enough and the results are proof of exactly that.

It is hard to keep asking Ohio State to play at its best game in and game out, but Chris Holtmann finds a way to get his team to that point. In this one, Ohio State is the better offensive team and the better defensive team. The Buckeyes are also simply a deeper team.

Getting margin on Maryland is hard because they are a slow-paced team that likes to muck and grind and ugly the game up. Ohio State has had some trouble in those slower-paced games. They’ve lost twice to Purdue and also to Minnesota and Northwestern in games that were all at 67 possessions or fewer.

I’ll give them the benefit of the doubt here to figure things out taking on a team that simply isn’t on their level. At least Purdue is closer and Minnesota is really good at The Barn.