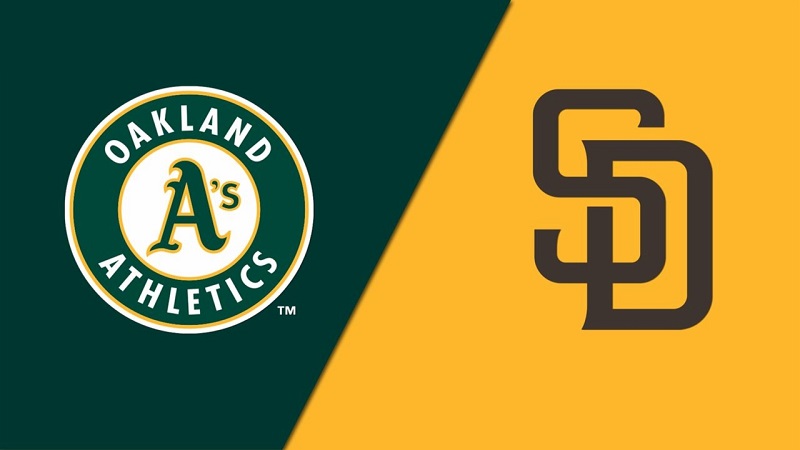 The Oakland A’s made their first move as a buyer, picking up left-handed reliever Andrew Chafin. To this point, the San Diego Padres have made the biggest Trade Deadline splash, acquiring Adam Frazier. Frazier’s Padres and Petco Park debuts will both happen tonight as this quick two-game interleague series gets underway.

Money has hit the board on the Padres with a move up from -130 to the low -150s at BetUS Sportsbook with a total of 8.5 for this matchup. The A’s will be down a hitter with the NL ground rules and the Padres will seemingly be up a big hitter with Frazier’s insertion into the lineup.

The A’s had plenty of reasons to enjoy yesterday’s off day. They weren’t on the field and still managed to pick up a half-game on the Houston Astros. The Seattle Mariners now sit just 1.5 games back in the AL Wild Card race, but there are a lot of metrics and indicators that suggest that the M’s cannot continue this run.

The A’s probably won’t win the AL West, as they trail by 5.5 games and can’t seem to beat Houston in head-to-head matchups, but the prize for winning the division is quite big, given that it eliminates the one-game Wild Card Round.

The A’s have been a solid ballclub this season. Offensively, their .311 wOBA is negatively impacted by Oakland Coliseum, but they have a 101 wRC+, so they are technically an above average offense when adjusted for park factor. The A’s continue to be a solid defensive team, so they rank eighth in position player fWAR on the season. That is one spot and 0.2 fWAR ahead of the San Diego Padres.

With a tough hitting environment at home, the A’s have to rely on their performance on the road and they’ve been solid there, ranking in the top 10 in both batting average and wOBA. They actually rank seventh in both categories. A few more walks would help the cause, but the A’s hit for a lot more power on the road.

Rookie right-hander James Kaprielian gets the call today. The 27-year-old had a lot of hurdles to overcome on his way to the bigs, but he’s been able to enjoy the fruits of his labor this season over 68 innings with a 2.65 ERA and a 4.15 FIP. There are some negative regression signs in the profile with a 90.6% LOB% and a .241 BABIP against. That could be the reason why money has hit the board on San Diego today.

Adam Frazier has 125 hits to lead Major League baseball and his .324 average is up there as well. This has been a career year for Frazier, a versatile player that can be an infielder or an outfielder. He has a 130 wRC+ and a .365 wOBA thanks to the best strikeout rate of his career and a higher degree of contact quality. The Padres may opt to use him at second base and move Jake Cronenworth to first, which would send Eric Hosmer to the bench, or he could play one of the corner outfield spots.

Despite the high level of talent on the Padres roster, this is an offense that only grades a little above league average with a 102 wRC+. The Padres have actually needed a recent offensive onslaught to be that good. This is a team that has had a lot of bad luck on batted balls, as the Padres are among the league leaders in 95+ mph batted balls, but have been in the bottom five in batting average and wOBA most of the season.

Frazier’s inclusion should help as a contact-oriented bat for a team that has batted just .244 on the season. The Padres have drawn a lot of walks and hit for a decent amount of power relative to their batting average, but Frazier fills a big need. Since umpires started checking for foreign substances on June 21, the Padres are second in wOBA and first in wRC+, so they have been coming around in a big way.

Chris Paddack gets the call today for the Padres. The 25-year-old has a pretty shallow arsenal with primarily a fastball and a changeup and the lack of variability has hurt with a 5.17 ERA. He has a 3.85 FIP, but Paddack’s below average command profile has yielded 13 HR in 87 innings and a Hard Hit% of 41.5%. He has a .315 BABIP against and a 60.5% LOB%, so he has been hurt by some bad luck, but also doesn’t have good enough command to make his own breaks.

This looks like a stone cold over. Oakland’s offense hits for more power on the road and the Padres offense has been terrific for the last five weeks. Kaprielian is a fly ball pitcher and a negative regression candidate and Paddack’s shallow arsenal is certainly problematic. With two good bullpens, we’ll stick with the 1st 5 over, but the full game is also fine if you don’t have that option.