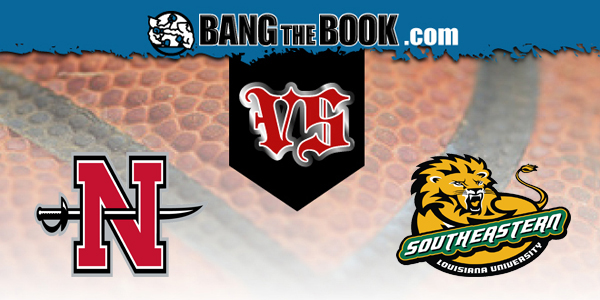 Another dub for us on this week’s spotlight college basketball previews right here exclusively at BangTheBook.com brings the record to 4-1 this week. After a rough go last week, it’s been nice to find some winners on the hardwood coming out of the Super Bowl. With a huge Saturday card, we’ve got a lot to consider.

There aren’t a lot of late games tonight, which is a bummer because we like to pick evening matchups so that these previews can have a lot of lead time. It limits the available games on an otherwise huge college basketball slate. However, there is a game that looks like a good one with some actionable opportunities and it comes way under the radar in the Southland Conference between Nicholls State and Southeastern Louisiana.

So, we’re digging deep for this game. Here’s the thing. Money won in the Southland spends the same as money won in the ACC or the SEC. Games that are off the beaten path or listed on the “Added” board aren’t going to draw as much attention from oddsmakers and recreational bettors. They’re more focused on huge games. What that means is that line moves are more telling, sharper in nature, and a lot more respected.

To this point, we haven’t seen much movement on this game, but we may as the day goes along. Nicholls is one of the better teams in the Southland Conference. In a conference that doesn’t play a whole lot of defense, the Colonels are second in eFG% defense at 46.5%. They are second in 2P% defense at 44.7%. Most teams in the Southland have a lot of turnovers because it is a pretty careless conference overall with the basketball. Nicholls does not.

That could be one of the reasons why the Colonels aren’t as good as some of the other teams in this league, but they remain pretty balanced overall. In 10 conference games, Nicholls is second in TO% on offense, so they take very good care of the basketball. They are also third in 2P% on offense. They also like to push the tempo a bit and that is important in this game.

In the first meeting between these two teams, Nicholls won by 20 at home. The Colonels were 28-of-42 on two-point and the game was played to 77 possessions. Nicholls had 1.128 PPP in that matchup. Southeastern Louisiana only wound up to .869 PPP on 10-of-32 shooting from two and 8-of-25 from three, which was a definite outlier.

Southeastern Louisiana is a 27.2% team from three-point land on the season, so that 8-of-25 showing very much stood out. The Lions have one goal on offense and that is to get to the free throw line. They are #1 in the country in free throw rate at 45%. They are 309th in the nation at 65.7% when they get to the stripe.

In that first game against Nicholls, SELA had 33 free throw attempts to just 16 for Nicholls. The Lions still lost the game by 20. They even made 23 of their 33 free throw attempts. It was not a banner evening for the Southeastern Louisiana offense. The other big skill for the Lions offense is that they pull down offensive rebounds. They are 50th in the nation in ORB%. They had seven in the game against Nicholls.

This is the worst offense in Southland Conference play. Their eFG% of 44.5% ranks 11th in the conference. They are shooting 27.7% on threes and just 46.5% on twos. They’ve been able to be reasonably competitive by the parade to the free throw line and the foul trouble that other teams are put into by their style of play. It doesn’t really seem like a very effective means of scoring points, especially with a low conversion rate at the free throw line.

This team is heavily dependent on Keon Clergeot, the 6-foot-1 senior that has taken 142 of the team’s 455 free throws. He’s shooting 78% on them, so he’s been good, but most of the rest of the roster has struggled to consistently score. Head coach David Kiefer works a lot of players into the rotation, but he has been able to get some great production recently out of Gus Okafor with three 20-point games over the last five. He really needs to rely more on his horses and he has been doing that lately.

I know that the metrics sites are what they are and that they are spitting out accurate numbers based on the data that is there, but this line should be higher than -6. Nicholls won the first game by 20 and got outscored by 10 at the free throw line via Southeastern Louisiana’s only means of offense. SELA has one win against a team outside of the bottom 50 in college basketball and it was one of the biggest outliers of the season from three-point range.

This game is way under the radar to say the least, but I don’t think it winds up being all that competitive.