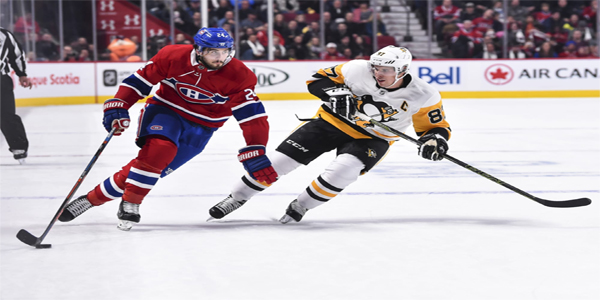 The NHL playoffs officially begin on August 1. Generally at this time, players are vacationing and training for the upcoming regular season, but nothing has been ordinary for the last five months as a result of COVID-19.

The hub cities of Edmonton and Toronto are hosting the NHL playoffs, as the players have been “bubbled” in hopes of limiting the spread of coronavirus. To this point, the NHL seems to have had the most success of any of the major sports and we’ll hope that will be the case as we move forward.

With the playoffs set to go and most of the teams in tact as play draws near, it is a good time to look at the NHL Qualifying Round Series Prices, courtesy of BetDSI Sportsbook.

We’ll start with the East and finish with the West and highlight some of our favorite bets and some key handicapping angles for these series:

The Pittsburgh Penguins are the biggest favorite in the NHL Qualifying Round for their matchup against the Montreal Canadiens. The Penguins are the highest-ranked team in the qualifying round and they do take on a Montreal squad that technically lost 40 of 71 games during the regular season with a -9 goal differential.

Montreal needs Carey Price to be the equalizer in this series. He had a .909 SV% and a 2.79 GAA during the regular season. He was not good enough in his 58 games to help the Habs to a better record. He’ll have to be better here. He probably won’t be, but -230 is a huge price for a best-of-five series with the extended layoff. Montreal would be the value play, but Pittsburgh wins the series and moves on.

A lot of people are on the Rangers to pull the mild upset here against the Hurricanes. The best player in the series could very well be Artemi Panarin, who had 93 points before everything shut down.

The Rangers and Hurricanes had similar power play success during the season, with the Rangers at 22.9% and the Hurricanes at 22.3%. Carolina was quite a bit stronger on the penalty kill. They ranked fourth in that department and the Rangers were 23rd.

Many believe that Igor Shesterkin will get the nod over Henrik Lundqvist in the playoffs. Shesterkin was great with a .932 SV% and a 9.34 GSAA (goals saved above average). The Hurricanes would be best-served using James Reimer, as he outshined Petr Mrazek. Neither guy was as good as Shesterkin during the regular season and the goaltending edge and the dominance from Panarin are the reasons why the upset is possible here.

Interested parties were not thrilled with what they saw from Sergei Bobrovsky in his first exhibition game effort. This is one of the most interesting first-round series because of the contrast in styles. The Panthers play a lot of high-scoring games. They scored a lot more goals than the Islanders, but also gave up a lot more goals. The Islanders play a very boring, old-school, defensive style. It isn’t sexy, but it may end up working out better in this format.

The Islanders went into the shutdown at 35-23-10, but had a negative goal differential. If they advance here, they will be a team that bettors look to go against moving forward. Both Semyon Varlamov and Thomas Greiss played well during the regular season, but Varlamov was the better of the two. He’ll need to stay focused here because his team’s path to victory comes with 2-1 and 3-2 types of games.

The Islanders will want this series played 5v5 as much as possible because Florida easily had the better power play unit. Florida may also need the special teams edge if Bobrovsky plays like he did during the regular season with a .900 SV, a 3.23 GAA, and a -14.91 GSAA mark.

The Islanders should prevail in ugly fashion here, but they’ll be a fade going forward.

Something tells me that the Blue Jackets will be pretty popular here. Columbus was ravaged by injuries during the season. They were one of the teams that was hit the hardest. Through it all they found ways to hang in games. They even picked up 15 “loser points” for overtime losses, including an 0-4 record in shootouts.

Goaltending is the question for Columbus. Will Joonas Korpisalo or Elvis Merzlikins get the nod? Will either guy be good enough to help Columbus advance? Everybody knows that Toronto is an adventure in the defensive zone, but the Maple Leafs scored 187 goals at even strength. Only the Capitals and Lightning scored more with 188. Columbus only scored 146.

The Blue Jackets also only allowed 147 goals at even strength and Toronto allowed 172. Columbus had one of the league’s worst power plays, but the injuries did play a role on that front as well.

The play of Frederik Andersen will also be under the microscope. Andersen was average at best during the regular season, though he got very little help from the guys in front of him. Only Detroit and Winnipeg allowed more high danger goals against, so teams got their chances from high-percentage areas. Columbus allowed the second-fewest high danger scoring chances.

Shifting gears to the Western Conference hub in Edmonton, we look at the Oilers, who are required to stay in a hotel like the other teams so that they don’t get any sort of advantage. They’ll entertain the Blackhawks in the 5 vs. 12 matchup. Chicago doesn’t really deserve to be in the playoffs, but they’re one of three West teams with a negative goal differential.

The layoff may hurt Edmonton. The Oilers made some Trade Deadline pickups and put some more speed with Connor McDavid. Then everything shut down. They don’t play with a ton of structure. They are a transition-based team. I’m not sure that style of play is going to jive with this long layoff. Chicago also plays a pretty wide-open game. There could be goals here from breakdowns, but these two teams have a lot of work to do in their own zones.

The Blackhawks allowed the second-most high danger scoring chances, so the Oilers will get opportunities and that could be all it takes. Edmonton also had the best special teams in the league with the top-ranked power play and second-ranked penalty kill. Chicago had one of the league’s worst power plays. How good can Malcolm Subban be? Can Corey Crawford carry the Blackhawks?

Those are the two big questions and they revolve around the same position. Mikko Koskinen outshined Mike Smith during the season and should get the nod. He’ll be good enough if things break down. Edmonton should live to fight another day, but the high-scoring games might be what to watch for here.

Front office issues for the Coyotes shouldn’t have any bearing on what happens in this playoff series, but it would be nice if there weren’t any distractions. Given that everything is littered with distractions these days because of the virus. The Coyotes looked like a playoff team for a good portion of the season and then everything just started to fall apart.

The Predators deserve a lot of credit. While they are one of the three West teams in the playoffs with a negative goal differential, they endured an early-season coaching change and the passing of the torch from Pekka Rinne to Juuse Saros. There just aren’t many redeeming qualities with this Preds team. If they were facing anybody else, we’d like see waves of money coming in against them. They were awful on special teams and created very few high-percentage scoring opportunities. Fortunately for them, Arizona had many of the same issues.

Is it an oversimplification to say that this series is Darcy Kuemper and Antti Raanta vs. Juuse Saros. Rinne was not good at all during the season. At least the Coyotes have a backup plan if they need one. Saros will have to be the spotlight guy for the Predators.

Arizona is live here because of some quality goaltending. Nashville is the better team up front. They should advance, but Saros will have to at least keep pace.

The Canucks were one of the NHL’s best stories for a while when they led the Pacific Division, but other teams got hot and Vancouver started to fade a little bit. They’ll try to pick it back up here against the Wild. Minnesota allowed the fewest high danger scoring chances and could make a push if they get any kind of goaltending.

Devan Dubnyk was awful during the season. Alex Stalock was pretty average all in all. Dubnyk’s massive fall may have been a contributing factor as to why Bruce Boudreau was fired, but the team seemed to respond well with Dean Evason at the helm.

Unfortunately, Stalock may not be enough to best Jacob Markstrom, who was having a career year in his age-30 season. The layoff came at a bad time for him, given how well he had been playing.

Minnesota had the worst high danger SV% in the NHL when everything shut down. Stalock will have to make some of those saves. The Canucks do have better special teams, but Minnesota’s power play was pretty decent over the course of the season. Maybe this is more of an over series if Markstrom regresses back towards his usual performance levels.

This is one of the more polarizing series in the Western Conference. The Jets are here because of Connor Hellebuyck. The 26-year-old was magnificent with a .922 SV%, a 2.57 GAA, and a 22.4 GSAA mark. That is the big edge that the Jets would seem to have over Calgary with Cam Talbot and David Rittich. Talbot was clearly better than Rittich and should get the nod here, but neither guy comes close to what Hellebuyck did.

On the other hand, the Jets were pretty bad in a lot of areas. They gave up the most high danger scoring chances and had the third-fewest. From an advanced metrics standpoint, the Jets are a fade team. The Flames should have been much better defensively than they were, but they didn’t get much goaltending.

Hellebuyck is the key here, as he was all season long for the Jets. If he can continue to shine, then the Jets will move on. With the long layoff, we have no idea how he will look. Winnipeg’s top six is also terrifying, but the rest of the roster contributes very little and the Jets are abysmal in their own zone.

The Flames don’t really stand out in many ways and were -10 in goal differential because of their shoddy goaltending. It is not a stretch in the slightest to see the Jets advance, but Hellebuyck also covered up most, if not all, of their flaws during the season.