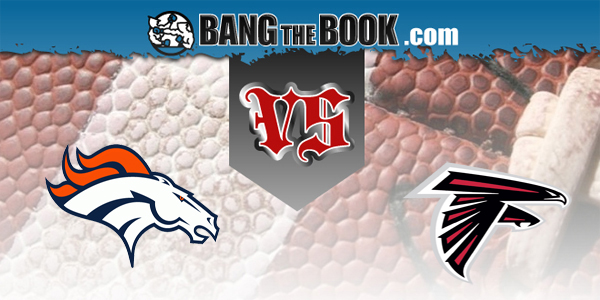 For the Denver Broncos, it’s been a somewhat difficult season, because they have had to play some of it without Drew Lock, who had been anointed as their “quarterback of the future.” But they are keeping their heads above water at least.

The same can’t be said about the Atlanta Falcons, who have collapsed too many times and have seen their head coach Dan Quin pay for it with his job. They are in the position where they’d like to get through the rest of the season with some hope.

These two teams meet on Sunday at Mercedes-Benz Stadium in Atlanta.

I have to admit to being at least somewhat impressed by the fact that after blowing games in the most bizarre ways, the Falcons are able to keep coming back and taking the field. And let’s face it – that wasn’t a bunch of stiffs they beat last time out, as the Panthers have made some strides.

And we can actually extol a few virtues of theirs. For one thing, Matt Ryan tops the NFL in passing yards. And Todd Gurley is fourth in the league in rushing yards, which did surprise me. Then you add in Julio Jones, who has 371 receiving yards in the last three games, and they’ve got themselves a “Big Three” effect.

Of course, Atlanta lack in other areas. Otherwise they wouldn’t be 2-6. But as the saying goes, maybe they’re the best 2-6 team in the league.

The irony here, naturally, is that the Broncos come into a game against a team with a reputation for blowing big leads having just come off a game against another team like that, where they came from 21 points down with a furious second-half rally. The Chargers have lost four consecutive games in which they were at least 16 points ahead, and if you ask me, that exceeds Atlanta in the category of “snatching defeat from the jaws of victory.”

The Broncos have won three of their last four games, and you’d have to consider them to be still in the playoff hunt if they can win this game. Drew Lock has a 6-5 record as the starter; last week he completed 26 of 41 passes and led the 28-point second-half surge that provided some real thrills. But you have to wonder if the player attrition they have sustained is going to catch up to them at some point, Already without Von Miller, they are without the services of wide receiver Courtland Sutton, and remember that they have also lost Jurrell Casey off the defense.

A lot really depends on what rookie Jerry Jeudy can do from this point forward to give Lock a credible threat down the field. And of course the Broncos have the potential to move it on the ground, with Philip Lindsey and Melvin Gordon.

The Falcons are playing with more energy under interim coach Raheem Morris, and keep in mind that to blow a big lead you’ve got to have been able to play well enough to get to that point in the first place.

Denver was outgained by 134 yards last week, gave up 28 first downs and had the ball for only 24 minutes. But you have to give them a lot of credit for staying power, and Lock, who hasn’t played a full season behind center, for leading the charge (pardon the pun) back.

Atlanta’s defensive line is second in the league in “Stuff Rate,” and that is good news for them against Denver’s run game. But the Falcons have all too often been stopped inside their opponent’s 20-yard line, and the Broncos have been one of the NFL’s elite teams when it comes to red zone defense, which we suppose is a credit to Vic Fangio’s defensive creativity.

Fangio has also had the Broncos playing well as a dog (covering ten of the last 13 in that situation) so we feel compelled to take the points here with DENVER.