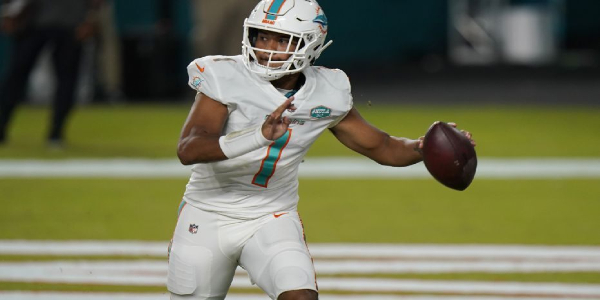 At this time last season, the Miami Dolphins had not picked up their first victory. And they have come quite a distance since then. Now, with three wins in their last four games, the Dolphins are suddenly involved with wild card talk. And they are in second place in the AFC East.

On Sunday they will play host to the Los Angeles Rams in a game that begins at 1 PM ET at Hard Rock Stadium in Miami Gardens. And guess what? If you’re a BetAnySports customer you’re in luck, because you’ll get a better deal on the odds with reduced juice.

Of course, if you follow the NFL, you know that the Dolphins made a change at the quarterback position. And it has come with great controversy. You see, Ryan Fitzpatrick, the 38-year old veteran who was kept around more or less to serve as a bridge over to the team’s insertion of Tua Tagovailoa, the first-round draft pick, was removed after a 24-0 victory over the New York Jets, at which time coach Brian Flores announced that Tua would be taking over as the starting QB.

Okay, fair enough. We knew that was going to happen sooner or later. But frankly, I thought this would go a little more smoothly. I figured they would explain to Fitz exactly what they were doing, and why they were doing it, and when they planned to do it. But all of it came as a big surprise to Fitzpatrick, who could not hold back his disappointment. He said he was “heartbroken.” As long as this guy has been around, and as many teams as he’s played for, that must REALLY hurt him.

Here are the NFL betting odds as they are posted at BetAnySports:

There is no question that we can understand the rationale of Flores, who undoubtedly has been in conference with management and ownership over this move. After all, while Fitzpatrick has had some great moments in the NFL, there is a reason he’s drifted around so much. He’s inconsistent, and sooner or later those inconsistencies will show themselves. He’s also got a ceiling, and I don’t think the Dolphins see Tua that way.

They believe that ultimately he will be the guy much more able to take them to the next level. In other words, while they are close enough to being contenders, he is the guy who can take them over the top, while Fitzpatrick isn’t. And they might as well get started with the next “era.”

At the same time, the clubhouse loves Fitzpatrick. He’s a leader, and is more than willing to take a hit. These guys play for him, and that goes back to last year. He has a degree of respect that Tua doesn’t have amongst his teammates. And there are insinuations that many of the players are resentful, not only about the way the quarterback change has been handled, but that Tua has not necessarily done anything to earn the starting nod. As a result, there is division in the locker room. And while that may not completely kill their chances, it doesn’t necessarily enhance their chances to win.

In the metric of Adjusted Line Yards, which measures performance on each side of the line of scrimmage, the Dolphins are 31st in the league on defense. What that means is that the Rams have a chance to get their play action game uncorked.

And the Rams are still the stingiest team in the NFL when it comes to yards allowed per pass attempt (5.9), and the second toughest when it comes to giving up yardage to wide receivers. They’ve allowed less than 35% on third down conversions (by the way, Miami is #1 in the league there) and they have the shutdown corner in Jalen Ramsey.

The point is, when you add Aaron Donald into the situation, this isn’t going to be the most trouble-free debut for Tua. So we’re more comfortable laying the points.

BetAnySports makes NFL betting a lot more pleasurable. But that goes without saying ……. When you access reduced juice, you get a break on the odds, and then Sports Betting Prime allows you to place wagers as the game is in progress……. Open you account with a debit card, credit card, person-to-person transfer or the virtual currency of Bitcoin, which is fast and easy with their automated system and NEVER incurs a transaction fee!