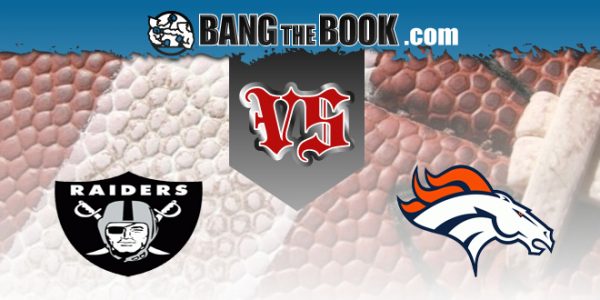 In order to properly evaluate the season finale between the Las Vegas Raiders and Denver Broncos, we have to speculate as to what the mood is in the Raider clubhouse after a monumental collapse against the Miami Dolphins knocked them out of the playoffs. That’s a downer, but truth be told, this team has not finished seasons all that well.

At this point they are just playing things out in Week 17 against a Broncos team that has committed to bringing head coach Vic Fangio back next season, but may be undergoing some significant personnel changes.

This game will get underway at 4:25 p.m. Eastern time at Mile High, and remember that as a BetOnline customer, you will have access to hundreds of prop bets that can be placed on the NFL games on Sunday. In addition to that, there is a popular feature of Odds Booster, which offers outrageously high payouts on pre-selected parlays.

Las Vegas started out the season 6 – 3, but they slipped under the .500 mark last week and now stand at 7 – 8, both straight up and against the spread. Denver is 5 – 10, with a point spread record of 8 – 7. The Broncos never really got out of the starting gate.

And the offense has been anything but explosive. Only once in the last seven games has Denver exceeded 20 points. This team is last in the NFL in time of possession and third from the bottom in yards per drive.

In the football betting lines that are posted on this game at BetOnline, the Raiders are laying points on the road:

Certainly this was not what Raider Nation was hoping for when Jon Gruden took over as head coach. But what can’t be ignored is the way these guys have come down the stretch the last several years. The fact is, since 2017, the Silver and Black have covered just 9 out of 31 games that have taken place in the second half of the season.

In the previous meeting, back on November 15, Las Vegas made it easy, winning 37 – 12 and kind of manhandling the Denver defensive line, rampaging for 203 rushing yards. It also did not hurt their cause the Denver quarterback Drew Lock was intercepted four times.

Perhaps it is in order to talk about the differences between Locke and Las Vegas quarterback Derek Carr. Even though there is no excuse for that four-interception day, we do expect that Lock is going to make more mistakes because he takes more chances. There is no quarterback in the NFL who throws the ball further beyond the line of scrimmage on an average basis then he does. In fact, at 8.9 yards (this is known as Intended Air Yards), he throws a full yard farther per throw than does Carr.

One thing that Denver has really been outstanding at is slowing teams down in the red zone. They are the only team in the NFL that has surrendered touchdowns on less than 50% of their opponents red zone trips (48.3%, to be exact parentheses. This obviously has the effect of turning touchdown opportunities into field goals instead.

And this obviously lowers the amount of points that are going to be scored. Take note of the fact that in the ongoing series between these AFC West rivals, we have played in eight straight games between them that have gone UNDER the total. That seems as good a way for us to go as any.