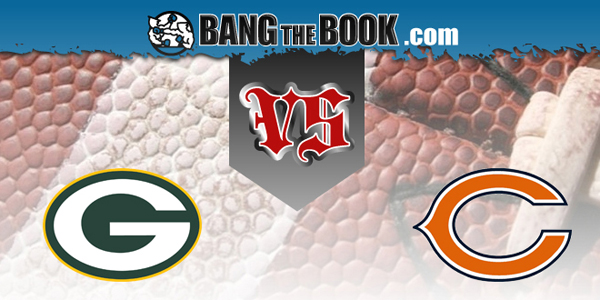 At Soldier Field on Sunday, we have a game that affects the playoff situation for both teams. The Green Bay Packers will have the opportunity to clinch home field advantage in the NFC playoffs, which comes with the conference’s only bye, if they can win, or if the Seattle Seahawks lose their game to San Francisco.

The Chicago Bears, who started the season off well, then went into a steep decline, and have managed to claw their way back, can get into the NFC playoffs as a wild-card simply by beating the Packers at home.

This is a 4:25 p.m. Eastern time kickoff, and remember that if you are signed up with BetOnline, you will get a number of attractive props you can bet on this game. And don’t forget that they also offer oOdds Booster, which gives you greatly enhanced payouts on parlays that are pre-selected for you.

Green Bay did not get the top seed last year, and the result was a crushing defeat at San Francisco in the NFC title game. So this is something that could be very important to them. Aaron Rodgers is gathering a lot of MVP steam, and he bolstered his case with four touchdown passes last week against the Tennessee Titans. He has 44 touchdowns on the year, with only five interceptions. Over the last three seasons, Rodgers has thrown only 11 interceptions, and that is nothing short of phenomenal.

But he was fed some very bad news on Thursday, when his All-Pro left tackle, David Bakhtiari, got injured in practice and was declared out for the duration, likely with a torn ACL. So it looks as if head coach Matt Lafleur will be moving Billy Turner into the left tackle spot. Realistically, this might impact the amount of time Rodgers stays in the game.

Chicago was a team that couldn’t seem to crack the end zone, but not long after head coach Matt Nagy handed the play-calling duties over to Bill Lazor, the team started to gel offensively. Now they have scored 30 points or more in four consecutive games, and the rushing attack, which had been the worst in the league, has gotten a shot in the arm by the return of David Montgomery from injury. Over the last five games, Montgomery has 529 yards on the ground. At the moment, the Bears are 8 – 7 (both straight-up and against the spread), and they have a “win and in” situation in that if they beat Green Bay, they are a playoff team. They can also get in if the Arizona Cardinals lose to the Los Angeles Rams.

In the pro football betting odds posted on this game by the folks at BetOnline, the Packers are favored as the road team:

Chicago had it easy last week with a 41 – 17 victory over the Jacksonville Jaguars, who were intent on clinching the top pick in the draft. In that game, Mitchell Trubisky, who seems to be finding himself, threw for 265 yards. Trubisky, who Chicago paid a heavy price for when they made him the #2 pick in the 2017 draft, says that he learned quite a bit when he was benched in favor of former Super Bowl MVP Nick Foles. And it appears that offensive coordinator Lazor, who has had unsuccessful stops elsewhere, has tweaked this offense to where it is more productive and more confident.

These teams met on November 29th, when Trubisky was just coming back to action. Green Bay registered a 41 – 25 victory, and had 182 yards on the ground. That is something for Chicago to worry about, as the Packers can go pretty deep in the run game (now Boston College rookie AJ Dillon contributing too). And with Rodgers at the controls, they are the league’s most successful team in the red zone, scoring touchdowns on 78.6% of their trips.

Having to play without Bakhtiari has always been a bit of a problem for this offensive line, though, and let’s not forget that the Bears have plenty of talent on defense. It would not be surprising for Green Bay to take their foot off the gas pedal at some point, depending on other results. So really, the safer play is to take points at home with the resurgent Chicago side.