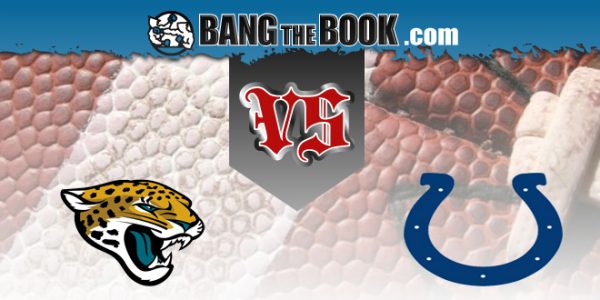 By losing last week against Pittsburgh, the Indianapolis Colts have painted themselves into a corner where they not only need to win, but also need other things to happen in order for them to make it into the playoffs. Fortunately for them, the winning part might be easier than usual as they are going up against a squad that appears to be motivated to do just the opposite. Or at least they HAVE been.

The Jacksonville Jaguars have already clinched something of their own – the right to the top pick in the NFL draft. and who knows – maybe with the pressure off, they’ll be able to do some good things on Sunday.

But considering that they’ve lost 14 straight with only one victory, and that the victory came against the Colts, we wouldn’t be forecasting an optimistic scenario for them.

This contest in the AFC South kicks off at 4:25 PM ET at Lucas Oil Stadium. and remember that if you are a customer at BetOnline, they have a lot of things to keep you busy, including a multitude of props to bet on the game, plus Odds Booster, which gives you greatly enhanced payouts on pre-selected parlays, everyday of the year.

Last week Indianapolis had a 24 – 7 lead in the third quarter at Heinz Field, and had stopped the Steelers’ running game cold. But then came the comeback, as Pittsburgh sort of un- flattened themselves and Ben Roethlisberger threw three touchdown passes to finish off the 28 – 24 Pittsburgh win that snapped their own losing streak and put the Colts into an uncertain scenario.

At this point, Indianapolis must get a victory in this game, combined with a loss by the Tennessee Titans in their game against the Houston Texans, to win the AFC South championship. They can also get into the playoffs as a wildcard entry. Of course, they have to beat Jacksonville, then hope for a loss by either Baltimore, Cleveland or Miami.

In the NFL betting odds posted on this game by the folks at BetOnline, Indianapolis is laying a heavy number:

Jacksonville certainly got lucky when the New York Jets decided to win a game or two. Now there is no possible way they can get beaten out for the #1 draft pick, which we presume they would use on Trevor Lawrence, the quarterback from Clemson.

The Colts also seek some payback, we imagine, for that opening day game, in which they held Jacksonville to just 241 yards and piled up 27 first downs, yet lost 27 – 20, as Philip Rivers, playing for the first time in a Colts uniform, threw two interceptions.

But Rivers has settled down, and the Colts are doing what Frank Reich envisioned they could do at the outset of the season, which is to bring some genuine balance with the ground game. Jonathan Taylor is proving to be a worthwhile investment as a second round draft pick out of Wisconsin; he’s not necessarily spectacular but helps them move the chains. He had 74 yards on 18 attempts last week in Pittsburgh and has 916 going into the final game of his rookie season.

On the other side, the drama that has been going on with former starting quarterback Gardner Minshew is coming to an end with the Jaguars. Minshew had gotten hurt and was replaced by a rookie Jake Luton, who wasn’t prepared for the gig, as it turned out. And then when Minshew was ready to play again, he begged – at least according to his own words – head coach Doug Marrone for the opportunity to play, but was denied. Veteran retread Mike Glennon got the call and has continued to get the call, despite being error-prone. He was intercepted twice last week in a 41 – 17 loss to the Chicago Bears. Truth be told, putting him in the lineup was probably a white flag. And we are certain that Jaguars ownership, which already fired general manager Dave Caldwell, will give the heave-ho to Marrone on Monday.

So although we will not make a heavy recommendation on this, it’s more than likely “name the score” time in Indy on Sunday so we lay the points against a team that has one of the worst defenses in the NFL in a number of categories, including yards allowed (dead last).

Fade the Jags. Fade to black.