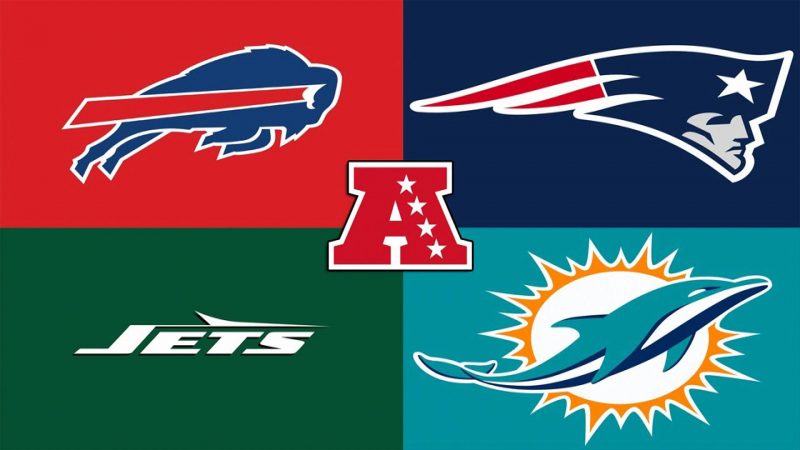 There are developments in the AFC East. We’re not going to tell BetOnline customers that there is anything happening that will displace the Buffalo Bills as the favorites in the division, but let’s just say that the quarterback situation in two of these camps is perhaps different than one might have expected at the start of training camp.

Could things turn out to be different than anticipated?

Let’s talk about these teams, with their respective odds to win the division.

In the opinion of some, this number represents some value. The Bills are going to have the most dynamic QB play, in all likelihood, with Josh Allen, who emerged as a star with 4544 yards and 37 TD’s last year. It’s a comprehensive receiver group, which includes Pro Bowler Stefon Diggs and possession guy Cole Beasley, and has added Emmanuel Sanders to the mix.

The one thing that has perhaps hurt this franchise is that while money was spent on offense, in support of Allen’s development, that came at the expense of the defense, which ranked only 14th in the NFL last season. One might also say the running game could use an upgrade, but with Devin Singletary and Zach Moss on hand, and speedy Matt Breida in the fold, it’s not so bad.

We wouldn’t say that the Bills are an immovable object, but right now there’s nobody better.

The Dolphins look to be on an upward trajectory, and considering that they started at ground zero prior to the 2019 season, it’s been a major accomplishment that they fell just short of the playoffs last year.

There is new blood in the offense; George Godsey and Eric Studesville are the coordinators, and Miami will probably be lining up with two tight ends more because QB Tua Tagovailoa seemed to be comfortable and productive with that alignment. Mike Gesicki is pretty good, and they drafted Hunter Long out of BC, but it’s not like they’ve got Zach Ertz and Dallas Goedert out there.

Raw speed was added with the oft-injured Will Fuller and first-round pick Jaylen Waddle, who caught passes from Tua at Alabama. There’s nothing much that’s scary in the ground game.

The Dolphins have some developing talent on defense; there’s no doubt about that. But they lost some veteran leadership on that side of the ball with the departure of Shaq Lawson and Kyle Van Noy.

The schedule is a lot tougher than it was last year, with non-conference games against Tampa Bay, Baltimore, New Orleans, Indianapolis and Tennessee.

And this situation is getting a little weird. After giving votes of confidence to Tua in the off-season, coach Brian Flores is now kind of mum about Miami’s interest in DeShaun Watson, which has become obvious by this point. The whole thing was murky as we last checked, and that can’t leave Tua in anything but a state of confusion.

For a while, it appeared that Cam Newton might start until Mac Jones was ready. Or that he’d be kept on board for special play packages at the very least. But Bill Belichick simply let Newton go, which means he’s got all the confidence in the world that Jones will be able to produce something right away.

If he can, he’ll have some support. Nelson Agholor comes in to bolster a weak WR corps; Hunter Henry and Jonnu Smith arrive as free agents to give Belichick the ability to use two tight ends. It’s probably a better offensive line, and this team can run the football.

These guys will be well reinforced on defense as well. This can once again become a premier unit. Notably, Kyle Van Noy returns a year after bolting for Miami, and Dont’a Hightower.

If there is any team that can mount a significant challenge to Buffalo, it’s the Pats.

New coach Robert Saleh comes in with a lot of enthusiasm. And you have to like the way he improvised with the San Francisco defense last year despite losing almost everyone to injury.

He’ll start from the beginning with BYU quarterback Zac Wilson, the second pick in the draft. And he doesn’t inherit much in the way of returnees; the Jets were last in the league in offense last season.

So management had to stock the wide receiver position a little. Corey Davis is a good one, as is Keelan Cole, and Elijah Moore has a chance to become one of the top rookies with more playing time. The backfield isn’t what it should be.

With Mekhi Becton and Alijah Vera-Tucker (14th overall pick from USC), Gang Green could have an outstanding left side of the offensive line.

But as a whole, this will be a work in progress for a while.

Get ready for the $500,000 Mega Contest at BetOnline, which pays a first prize of $200,000! Just pick five games against the spread for every week of the NFL season and you could find yourself in a position to win one of 200 cash prizes, with NO rollover requirements! And multiple entries are welcome……. Go to the website and sign up now!